In the original meme, this was "Favorite movie based on a book/comic/etc" but since again, Indian films either don't do those enough (I could think of around 6 films that I've seen that are adaptations of novels, and I didn't feel like that was a big enough pool to choose a favourite from), I decided to alter this category a bit. As always, if you feel like doing this meme and changing it back to its original, feel free.

There's been many decent period films done in Hindi films, as well as Tamil and Telugu films (though again, my experience with the latter is limited). For a moment I considered picking Jodhaa-Akbar, because for all its flaws, I remember the good bits the best - the epic scale, the fantastic songs, the strong performances and chemistry between the two leads. But then I remembered Lagaan, the director's previous period epic. I rewatched Lagaan not too long ago and it is just such a well-made film. No matter how many times I've seen it, I still find the story gripping and enjoyable. The songs are an absolute delight, the performances are well-rounded.. It is truly a modern classic, and I'm sure I'll continue to enjoy it in the coming years. 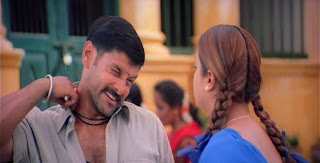 20. Favorite movie from your favorite actor

'Chiyaan' Vikram is synonymous with great, varied performances, so you must be thinking, "She could've picked Pithamagan, or Deiva Thirumagal, or Anniyan or Raavanan, or Kasi, or.." and yes, I know full-well I could've. But rather than the best performance, this meme calls for a favourite film, and as far as favourites go, it's nigh-impossible to find something I love more than Dhool.

It was the film that introduced me to Tamil masala and to Vikram, Jothika, Vivek - all these people I'd come soon to consider favourites. I realise in retrospect that to some it might be a solid masala but nothing special, and endless rewatches have shown me that the plot does wear thin on you. What remain entertaining, though, are the performances, the comedy, the songs, and the film's ability to build really good masala out of a plot that is fairly standard (one brave villager against corrupt police and corrupt politicians).

And Vikram here looks great and acts great (whether in comedy, romance or action!). If I needed to introduce somebody to Vikram, I doubt I'd go wrong in picking this film. It's just that good.
posted by veracious at 4:18 PM