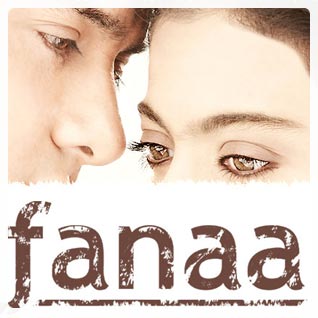 5. Favorite love story in a movie

In a cinema so rich with different love stories, this was a hard one to pick. To go for an overwhelmingly cute b-plot love story, or an epic romance? A classic or a lesser known film? In the end, the answer was obvious. Fanaa is romance as only Hindi films do it - a little short on things like plausibility and logic perhaps, but so high in emotional potency, and chemistry between leads. The initial fluffy first half is just okay, but where the film really delivers is the second half.

I don't talk about Fanaa an awful lot, perhaps because the story in it can be so devastating it's not precisely the easiest to rewatch. But what you might not know is that I was absolutely obsessed with this film back in 2006 when it was only coming out, and was following all the promotional materials and just could not wait to see the film. Unlike some other films I've anticipated since that fell rather short of my hopes, I feel like Fanaa delivered. For anybody who wanted to see what Kajol and Aamir would be with one another, I cannot imagine a more interesting set-up or roles for them to portray with one another.

It's far, far from being a flawless film. There are some excesses and cheesiness I wish the film had steered clear of, but as a love story, it certainly gives you what you want - as well as stomps on your heart a little. Well, a lot, actually..
posted by veracious at 1:28 PM

This movie is loathed by a lot of people - and I just can't understand it! It's so moving and suspenseful and there's so much love... and the music! Ah, I need to re-watch it!

It's got its cheesy parts, there are some things that could be less silly - but essentially I agree, it's a great love story, and the soundtrack is very good as well.

There are a lot of things that I hated about Fanaa. A lot. And the love story is devastating, for lack of a better term. BUT Kajol and Aamir made it mostly magic. It's amazing how much this one can tug at you. Especially the ending. It's so resolute yet unhappy at the same time.

I'm with Mette - I don't get why this movie is so vigorously dissed by so many. Apart from Tabu's awful role and performance, I didn't think there was anything particularly wrong with Fanaa, and I enjoyed the joDi immensely. Plus, the soundtrack really is good, and it's always nice to hear subhaan allah when out to dinner and be able to surprise the waiter by saying so.