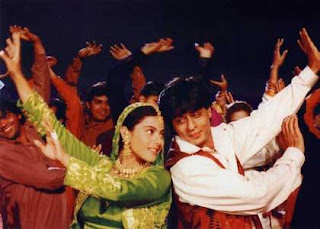 29. A movie from your childhood

When you begin watching Indian films aged 16, it's largely debatable whether you can have a childhood favourite. A teenage favourite?

Regardless, Dilwale Dulhania Le Jayenge was maybe the third or fourth Hindi film I watched and probably the first one I properly fell in love with. I've waxed poetic about the film, and how it may not be that same magical experience for everybody, but on me it certainly worked like a charm. I can certainly see the film's flaws and problems, but it remains a film I'll gladly rewatch. The chemistry works, the story works, and even if the soundtrack is not the most amazing Jatin-Lalit soundtrack out there, that works splendidly on me as well.
posted by veracious at 1:08 PM