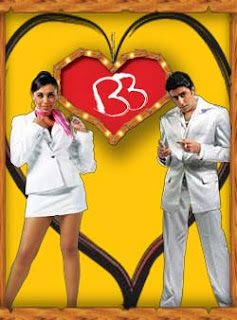 11. Bunty Aur Babli (2005) - What's not to love about this movie? Colourful, fun romantic comedy filled with catchy music, costume changes and hijinks. Brilliance! Rani and Abhishek are fantastic in it. It's also special for me as it was one of the first Bollywood movies - if not the first - I anticipated, listened to the music beforehand and was otherwise dying to see. It did not disappoint, and it got better with rewatches. This one's a favourite for sure.

12. Dushman (1998) - I watched this revenge story when I decided I needed to see more Kajol films, and somebody told me her performance had really impressed them in this. I have to say I agree. Nevertheless, great Kajol performance great movie does not make. The film itself feels trite and boring. I just wasn't feeling it. 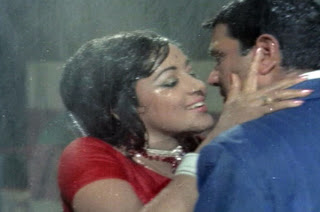 13. Jugnu (1973) - A damn fine 70's masala film starring Dharmendra and Hema Malini. I believe I've talked about this before (indeed I have!) so I'll just say it's still on my "to buy" list as I can't find the DVD anywhere! Thankfully most of the songs are on youtube - this film has some awesome Hema dancing.

14. Paheli (2005) - Visually stunning film with jewellery product placement like whoah, starring Rani Mukherji as the unsatisfied just-married wife of boring businessman (Shahrukh Khan). Naturally she falls in love with a ghost (Shahrukh Khan!) who enters her life and seduces her. I'm not big on infidelity stories - it's one of those tragic real life issues I don't particularly want to mix up in my romantic movies. Still, this one's not too annoying, and I loved seeing Shahrukh in the role of the husband - so un-Shahrukh, it was certainly refreshing. 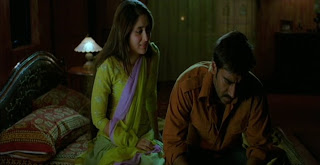 15. Omkara (2006) - Amazing film I have naturally discussed previously, Vishal Bharadwaj's modern Othello interpretation. Very near flawlessness. Awesome performances. Of course, as it stands, not an easy watch - nevertheless, I've seen it multiple times. I look forward to viewing it again, but I think I need somebody to share it with .. otherwise I'll weasel out of watching it all the way through, right to the heart-wrenching ending.

16. Kya Kehna (2000) - Life is wonderful! Or is it? Not if you take nearly 3 hours of your life watching this movie. Okay, okay, I'll admit: Preity Zinta does give us a great performance in it. Saif Ali Khan has an unbearable mullet and a douchebag of a character to play, however, the movie is tiringly 90's and it's just ..not very good. It's just one of those films I'd rather not waste time thinking about.

17. Pithamagan (2003) - Director Bala's best work that I've seen, Vikram's award winning performance, stellar Surya - this one is hard-hitting Tamil cinema overall. Of course I've reviewed it before but I suppose it never hurts to re-recommend it to people. Just remember: don't go in expecting light entertainment. 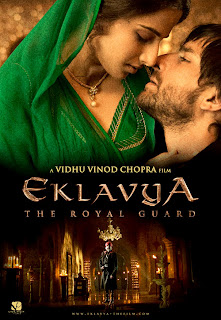 18. Eklavya (2007) - Christ, what a waste of great cinematography and casting this film is. I cannot believe Vidhu Vinod Chopra kept writing and re-writing this movie for aeons - you'd expect such a huge effort to actually produce a good story. But no, the story is cliché and trite, despite being packed into a short running time. Sigh. Original review here.

19. Johnny Gaddaar (2007) - I still prefer Ek Hasina Thi but this one is another nice proof of talent from Sriram Raghavan. It's a who-dunnit where you know who did it, but are still on the edge of your seat. The pace could be better but still, I really enjoyed this movie. Now I just need to find the time to rewatch it!

20. Bheema (2008) - My original review pretty much says it all - what a dull movie. I'm hoping Vikram's future efforts are more entertaining than this one. However, seeing as how the release dates keep getting pushed back, I have my fears..
posted by veracious at 1:56 PM 4 comments: 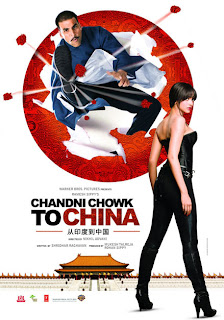 How little did I enjoy Chandi Chowk to China? So little I almost did not want to grace this review with a picture or a poster of the movie. The only reason why I did is that I know people enjoy reviews with pictures more than reviews with none, and I want people to read this.

My view is not original: CC2C tanked in the box office, and it's all too easy to see why. But first, a smidgeon of background - I was skeptical of the bad reviews and the dismissals. I really looked forward to this movie, from the first poster to the nutty first trailers. The movie had so much going for it, it couldn't possibly be as bad as people were saying it was! Let's do the math..

1. Nikhil Advani has done draggy but tremendously entertaining films. After all, there isn't a director in Bollywood who hasn't done flawed films, but out of the great numbers of flawed films, Nikhil's have always stood out for me. Salaam-e-Ishq is great fun.

2. Akshay Kumar, doing kung-fu/martial arts type of thing. Easily the best thing about all of Akshay's bad 90's films was the parts where he got to kick some serious ass. Even better when those moves showed off his martial arts training. So a movie where it's all about the kung fu action? Hot damn, yes please!

3. Deepika's action heroine avatar. I'm not huge on Deepika, since she hasn't really had a chance to prove her acting chops yet but I'm always into heroines who go beyond damsel-in-distress. Okay, so her "Chinese" look was kind of odd but girl kicking ass? Gimme!

And, as usual, asking yourself "How bad can it be?" ultimately ends up being the kiss of death for the movie that actually is bad. Very bad. Unbelievably, tragically, unsuccessful at whatever it is trying to achieve.

The plot is mind-numbingly filmi, and not in a good way. I can embrace the masala as the next person, but the clusterf*** of mistaken identities, slapstick comedy and of course, the flashback fight scene with a baby (insert groans) just made my head hurt. I wasn't feeling it. Akshay's character was annoying, unlovably stupid, the father-son connection between him and Mithun Chakravorty forced and the sole saving grace of the film was Deepika, until she visits a Chinese factory where they enable all the vapidness of the rest of the movie, with gadgets.

But okay, okay, I thought. I was seeing the movie for free, on a plane flight and I had 8 more hours to kill. Just bring me the kung fu, I thought - there was surely a 40 minute awesome kung fu movie hidden in this idiocy. I just had to wait for it.

Sadly, that awesome 40 minute movie turned into a 30 minute movie, and then 20 minute, 10 minute - oh lord - and then I was watching credits. In other words, it never came. I mean, sure, there was action. There were fight scenes. But I never wound up being into it. Everything was just so .. unexciting. Forced. Lifeless.

Early on the in the movie, Akshay's character Siddhu makes references to fusion food - Chinese curry, Indian noodles. If I were to compare the movie to a dish, I'd say this; I don't believe a good Chinese/Indian dish is impossible. It just depends on the chef, and the ingredients. The chef lost the plot here, and the ingredients from both countries were stale. Whatever potential was there, died in the making process. It might look pretty on the plate, but the taste is not good at all.

So, really, stay at home, order take-out. Watch anything but this movie.
posted by veracious at 1:53 PM 5 comments:

In less than ten hours I leave for my first trip to Asia. Specifically, South Korea.

This country and its culture are as interesting to me as India's, and I've spent about as much time consuming Korean entertainment, music, television as I have watching Indian movies. So yeah, I'm very glad to be able to go and travel the globe once more. (Maybe India will be my next trip...?)

I'm sorry April was such a lame blogging month; I mostly just rewatched this and that. I have a post to make about re-watching Lage Raho Munnabhai with a bunch of NIFs and also maybe further thoughts on Slumdog.

I'm returning May 18th. After that, I'll have free time to return to my blogging schedule, and maybe my headspace won't be occupied by this trip, planning it etc so that I can actually relax with an Indian movie.

Meanwhile, take care and please don't drop me off your blogrolls. I'll be back I swear!

Alvida!
posted by veracious at 7:53 AM 4 comments: