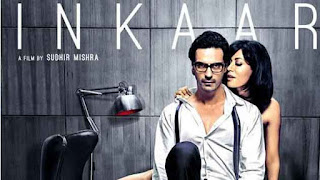 Whether Inkaar fails or succeeds seems solely dependent on what you want out of it as a film, and what your expectations are. If you're looking for a fairly grounded, realistic and serious treatise on sexual harassment in the urban Indian work place, you're going to be disappointed. This film does not make a progressive statement about sexual harassment, either; it portrays a lot of sexist characters saying or doing sexist things, and the main female character battling, but not necessarily always triumphing over, these prejudices.

If, on the other hand, what you're looking for is a case study of two very driven individuals, getting into a complicated relationship and complicating it further with their own inadvisable actions, playing rather vicious mind games with one another, and sabotaging each other at every turn, well, this is your film. Chitrangda Singh and Arjun Rampal grace it with their powerful, interesting chemistry and solid performances. The more the film progresses, the less it becomes about sexual harassment in general - what can happen when emotions and lust enter the work place - and more specifically about Rahul and Maya, these two characters and their strange relationship.

Knowing that I would hate the film, if it did try to say something about sexual harassment, and then reverted back to the same old tropes and clichés, spoken by the more sexist of the film's cast of characters (including Rahul), I made a conscious decision to mainly see it as a story between these two characters. This benefited the film enormously - it's a slightly uncomfortable watch, where the writing isn't always as top-notch as you wish it were, and the acting elevates it only just so that it becomes watchable. In the end, I liked it - not for the things it was stating, but for the way these actors decided to play these characters. By the climax, I was gripped by the story. Whether you buy into the end resolution, seems to depend on whether you believe that Rahul and Maya were somehow changed by the events of the film. I think they were, because I bought into these characters in such a powerful way.

I would give it a very hesitant recommendation, however. It's a film I decided to be forgiving to, and enjoyed mainly because of my own forgiveness. I can see how it could be seen as very damaging, regressive, and most of all annoying.
posted by veracious at 12:28 PM 4 comments:

If you have a taste for the occult: Ek Thi Daayan. 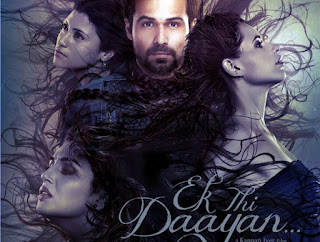 Bobo (Emraan Hashmi), a magician by profession, is haunted by memories of his sister's death. His current girlfriend Tamara (Huma Qureshi), with whom he's adopted a child, is getting worried. Little by little, Bobo's paranoia grows as he begins to see a repeat of his childhood horrors unfold in front of him...

Ek Thi Dayaan (Once there was a witch) is an odd film for me to write about. Vishal Bhardwaj's name gets numerous credits; he's in charge for just about everything except the direction, which is the job of debutante Kannan Iyer. As such, I was ready to love this film, despite the fact its story does a strange balancing act between the real and the supernatural. The characters and their interactions are very real and genuine. The performances are terrifically naturalistic; the three actresses especially shine in their respective roles. But the supernatural element is strong, and played up as such - it isn't problematized and no great energy is exhausted to tie it with human psychology as we know it.

Simply put, it's an odd fit. In a film that looks great, manages to create a very suspenseful mood when needed and that explains its mythology well, it feels silly that my main gripe is the mythology itself. Perhaps I'm just not the audience for it - I'm not much for horror, and when I am, I prefer it psychological as opposed to superstition-based. As such, I think the only things I really loved about this film were the performances and the music (also by Bhardwaj). Check it out, if the cast appeals to you, but go in with lowered expectations.
posted by veracious at 12:40 PM No comments:

ABCD Any Body Can Dance: delight of the year. 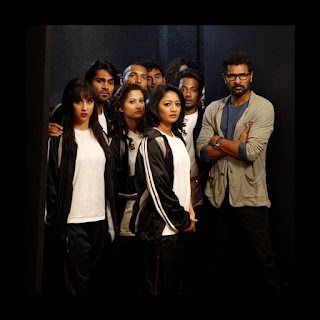 You know when a film just hits that sweet spot of exploiting a formula without being formulaic? That's ABCD. It's an underdog tale well-told, that ends up being really heartfelt and moving, despite not being the best-written script. It's an ode to dance, first and foremost, and what an ode it is!

The film, directed and written by choreographer Remo D'Souza, starring the man whose name is a synonymous with dance, Prabhudeva, begins in a rather dull manner: Vishnu (Prabhudeva) gets fired by scheming dance company owner Jehangir (Kay Kay Menon with a soul patch, which is the most evil of facial hair styles) and is down in the dumps, when he discovers some local youths clashing with one another ..in the form of dance! Inspired by this, he decides to teach them all they need to know about dance. And boy, does he ever.

Let's be honest: you watch this film for the dancing. You should watch this film for the dancing. At the same time, I was surprised at how engaged with the story I found myself. Little by little, the characters emerge from this talented group of dancers, and you end up really feeling for them. It's precisely as Prabhudeva's character says in the movie - to dance is to express emotion, and by the end of the film, I found myself tearing up at these expressions. 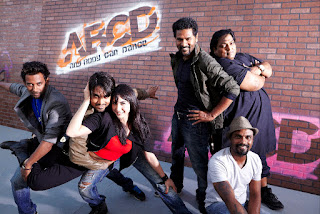 I don't know what more to say about this film, really; definitely see it, if you're sick of seeing simplistic dance routines in films, or if you like Prabhudeva as a dancer, or if you just want to see a great ensemble film that's beyond entertaining (especially once they get done with the tedious set-up of circumstances).

Maybe I'll view it with a more critical eye during rewatches but so far, this is my film of 2013 and thus I'll just shower it with lavish praise. Go see it. Go see it now.
posted by veracious at 12:18 PM 1 comment: 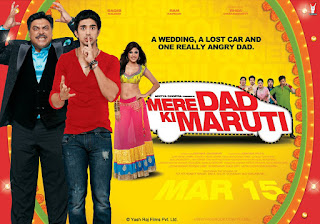 The storyline to this one is simple: Sameer's (Saqib Saleem) sister Tanvi (played by Benazir Shaikh) and her husband-to-be are getting a car from papa dearest as a wedding gift. The car? A red Maruti. Sameer, eager to impress a girl by the name of Jasleen (Rhea Chakraborty), takes the car for a spin and loses it. Cue a movie-long hunt for a replacement car by Saleem, Jasleen and Saleem's friend Gattu (Prabal Panjabi, who viewers will recognize from MFK, where he was also in the best friend role).

I talked about the unrelenting commercialism and shallowness of Luv Ka The End in the review I wrote for it, and am sad to note that instead of cashing in on MFK's youthful charm, this Y-Film decides to go out of its way to glorify material possession. I honestly wouldn't mind the whole film being a blatant commercial for a car (I didn't mention the model of the Maruti as to not participate in this marketing campaign, though I suppose just typing Maruti this many times will have progressed their evil scheme). but could they have made it a bit funnier? 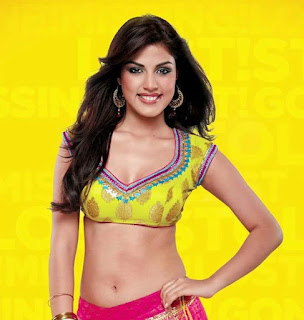 The problem this time lies chiefly with the absolutely appalling portrayal of women in this film. Jasleen, who insists on her name being pronounced Jazzlin, is constantly the butt of jokes for being, well, dumb. There is almost nothing more to her character than the fact she is dumb, yet hot, making her dumbness forgivable and more like a lovable quirk by the end of the film. There is a point in the film where she accuses Sameer of thinking of her as being shallow, but at no point does the film really give us a more fleshed out picture of her. She comes off as your standard hottest girl in the school, who is as dumb as a box of rocks, and only cares for cute clothes and flash cars. It's so mind-bogglingly unfunny.

Then there's Tanvi, Sameer's sister, who doesn't get much of a characterization other than yelling at him, but strangely enough, does get a song number. She performs a song at her sangeet, for her fiancee. She miscalculates and performs a very raunchy song about their upcoming wedding night, in front of their families, leading to much embarrassment in the audience. The entire scene is beyond weird: it's half-way between a serious, raunchy song-and-dance number, and embarrassment comedy, and it's not strictly speaking funny or sexy. It's just cringe-inducing, and again, the only person besides Tanvi dumb enough not to realize how embarrassing this is, is actually the family's mother. Ha. Ha. Ha.

I won't even get into the running joke where people mistakenly believe Gattu is poor, or from a poor family. That is the entire joke - that people think he's poor. Ha? 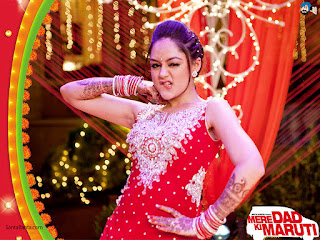 I won't deny that there are a couple of genuinely good laughs tucked into this messy flick: the finale absolutely made me laugh a ton, and there are a couple of side characters who made me chortle a few times as well. I absolutely love Saqib Saleem, and even if his character was an asshole here, I did enjoy his performance, and it didn't diminish my love for him any. Ram Kapoor was also very good. I won't judge the actresses harshly - like I said earlier, they had very little to work with.

The songs are grating - the English, the rap, the verses mostly just praising the heroine's hotness don't exactly make for an edifying mix. Saleem is a very good dancer, though, and I think if anything this film proves that the man should move onto bigger and better things. Y-Films products can be excellent, and have personality beyond the glossy Hinglish exterior - we saw that with MFK. So what happened here? I'd put my money on it just being laziness. These are lazy jokes with poorly written characters. It ranks slightly above LKTE in my books, but not high enough to actually be a recommendation. Just go rewatch MFK, in all honesty - I've rewatched it recently and it's enjoyable for a second viewing.
posted by veracious at 12:12 PM 3 comments: