Monsoon Shootout: exploring the what if. 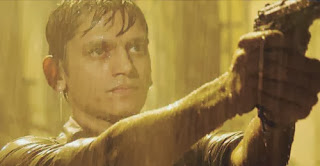 I had no idea what to expect from Monsoon Shootout - I did not recognise the director, didn't look through the cast, and the festival website merely described this as a shooting-filled policewallahs vs goons type of story, essentially nothing new under the sun. I hadn't heard it had been praised in Cannes, I hadn't even heard it had been to Cannes, and I certainly didn't expect what is surely one of the best off-beat films of the year.

Amit Kumar (son of Kishore, incidentally) directs the story of rookie cop Adi (Vijay Varma in a confident performance), entering the police force, only to encounter deeply corrupt, inhumane police misbehaviour on his first day on the job. Khan (Neeraj Kabi), his superior, is more or less a crook in a uniform - willing to go to any length necessary, where Adi wants to stick to doing things the right way. Quickly he finds himself in pursuit of a suspect, Shiva (Nawazuddin Siddiqui - I gasped in anticipation the moment I recognized him), and has to make a decision, soaked in the monsoon rain - to shoot or not to shoot.

As the narrative starts to go through every possibly scenario, it does a rather remarkable thing of fooling its audience. Even as I knew that the scene I was watching was just a "what if", I was engaged with the story. I was living through it. I was inside this world of slum-dwellers and morally corrupt policemen, of questionable guilt and innocence. 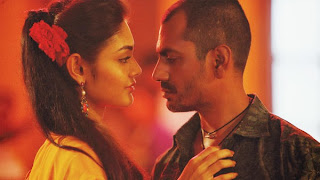 Nawazuddin Siddiqui has been spectacular in pretty much everything he's been in as of late, so it feels almost tired to sing his praises. He's very effective here - against  the wide-eyed Adi, who's coming face-to-face with tough moral decisions every day, Shiva's varying level of guilt and malevolence is clearly depicted in Siddiqui's performance. Tanishtha Chatterjee as his wife Rani is equally good.

The film is currently doing rounds in the festival circuit, but when it finally gets a proper release in India, I bet it'll make many people's "Best of 2013" lists. As with many stories, the setting and the beginning are nothing new - there have been countless films where cops are as bad as the criminals they're trying to catch, and where politicians conspire with gangsters in an urban setting. But the different take on these themes in this setting, and the excellent acting makes Monsoon Shootout completely worth it.
posted by veracious at 5:12 PM No comments:

Yeh Jawaani Hai Deewani - precisely that, and then some.

Two years ago I saw Zindagi Milegi Na Dobara, a comedy-drama about love, travel, friendship, youth and a little bit about growing up. I reviewed it with a slightly rambling audio review, and if you're too lazy to give that a listen, I'll recap my thoughts on the film: I liked it, but I didn't love it, and the whole experience made me rather pensive about what it means to grow up as a viewer. Suddenly things you adored about films are things you're no longer impressed by, and might even start to find annoying. I would have loved Zindagi Milegi Na Dobara, when I was younger, because it's heartfelt cheesiness and focus on male friendship above all else would have worked its magic on me, and everything that I still found good about the film - the music, the performances, the comedy - would've been heightened further.

I don't bring this up to draw a direct comparison between these two movies, even though they share a cast member (the darling Kalki Koechlin) and some common themes of youth and friendship and travel or because I saw both films in the same theater at Helsinki International Film Festival. I bring this other film up because the experience I had with it, and the experience I had with Yeh Jawaani Hai Deewani to me seem like siblings - watching Yeh Jawaani Hai Deewani was also a very personal experience, and some of the things I loved about it may be completely universal but at the same time I felt like the movie was talking to me. Just me.

Ayan Mukerji does an absolutely stellar job in wringing something really fresh out of the scene we've seen a million times in Hindi films: the uptight, studious girl Naina (Deepika Padukone) with the flirty, out-going dude Bunny (Ranbir Kapoor), at a train station, in the beginning of a journey they're about to go on together. A part of the triumph is just that instead of being these characters we've seen before a million times, as clusters of characteristics that form polar opposites (she's serious, he's funny and so forth), Naina and Bunny are actual characters. They form a chemistry and a friendship that is very much the extrovert making the introvert enjoy life and loosen up a little, but it's also more than that.

The film is fluffy and funny and enjoyable, but it's also got this layer of realism about its young characters. The two other friends that complete the central cast - Kalki Koechlin as Aditi and Aditya Roy Kapoor as Avi - are not just friends to our lead characters, they have their own motivations and aspirations as well. These young characters accomplish their aspirations, fail to, change their aspirations because they've changed as people, all the things that people do at this point in their lives, when the world feels completely conquerable. 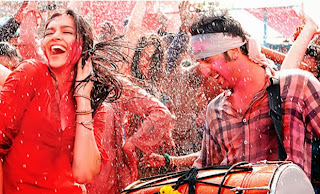 I don't mean this to sound like an over-enthusiastic celebration of youth - I'm sure the question about aspirations, and what you want your life to be are relevant to many people at various stages in life. It's not an age thing, necessarily. But I guess that's where the personal film experience comes into play; I felt like YJHD was asking all the questions I'm asking myself right now. Bunny's enthusiasm for travel gains a new layer on the second half, when he has a series of conversations about his new job and his chosen nomadic life style with his friends from back home, really struck me. Travel is about living life to the fullest, in many ways, and gaining new experiences, but it can also hide something - a literal escapism from home, or from settling down. After all, if you never stop, you also never stop to think about where you're actually going, and where you should be going, or staying, instead.

If you've not seen this movie, reading this review might make it seem like a particularly serious fare, which I assure you it is not. The reason I fell in love with these characters was because they feel true to life, but also because they're just so funny. The narrative is woven with delightful, bouncy song-and-dance, from the opening number that features a great guest star appearance and there's rarely a moment when the film stops being entertaining. I love the depiction of friendship - joyous but not without problems, and not without being able to overcome those problems, and there is also a healthy friendship depicted between the two women at the centre of the film.

Is there anything wrong with the film? Well, no film is flawless, and there are a few comedic side characters who I did roll my eyes at a little. But for the most part, it's been a while since I've been this smitten, walking out of a Hindi film. I'm sure a part of it is just the giddiness of the theater experience (such a rarity for me) but most of the credit goes to the script: taking tropes I like, and turning them into more fleshed out characters with interesting dynamics and facets that just seem very true to life, all of these little things came together in YJHD rather beautifully. I haven't spoken word one about the two leads in this film, but it's almost like I don't feel the need to point them out specifically - I already know Deepika Padukone is definitely among the better new faces of the past couple of years, and Ranbir Kapoor is good, despite still not being a favourite of mine. Their chemistry is easy and comfortable here, and something I'm sure I'll enjoy in many future viewings.
posted by veracious at 4:10 PM 2 comments: 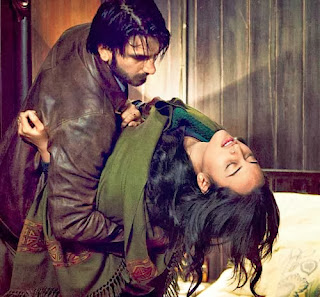 Lootera is an atmospheric period drama with many good facets; the music, the cinematography and the acting all stand out as great. In the backdrop of 1950's India, a somewhat sheltered landowner's daughter falls in love with an archaeologist visiting her father's land. Things unfold slowly, and the film does a good job of showing things, rather than telling. The young actors, Sonakshi Sinha and Ranveer Singh, do really well in their roles - there's a new maturity in both of them that shows what they're capable in the hands of a good director.

With all these things going for it, I was surprised at myself for not loving this film - or perhaps not as much surprised as disappointed. The thing is, as the undercurrent of tragedy in this tale of love become a prominent feature of the story on the latter half, I heard sniffling around me in the half-empty film festival screening, and then I realised it - I wasn't emotionally engaged with the film, unlike these other viewers. I wasn't emotionally engaged at all. I wasn't living through the story with the characters, like you do in a particularly good film, but instead, I felt as if I was looking at them from the outside.

There are a few reasons for this, but I feel like biggest reason was probably the way that the story references changes in landowner (zamindari) law and the way the newly independent India was changing its societal structure, chipping away at the privileged class whose fortunes had been handed down to them, generation through generation. Sonakshi's character Pakhi comes from this very privileged upbringing - she's always had everything, and early on in the film there's a scene where she uses her social standing to benefit her in a rather manipulative way, against one of her servants. This is not a horrible scene, but it rubbed me the wrong way - if I was supposed to sympathise with this character, that scene established her as spoiled and unlikable. When Ranveer's character Varun enters the picture and falls for her, I found myself wondering why he likes her so much. I couldn't emerge myself in their love story, so when it unfolds into heart-wrenching drama, I was just left sitting there, watching, thinking, "Yeah, okay, so now this is happening I guess." Detached. The one thing you don't want to be in a film of this kind.

It's unfortunate, and it's possibly one of those things that's changed in me over the years. I'm going to sound like a Marxist when I type this but I can honestly say that having a perspective on things like societal or economic class is something I've gained in the past couple of years when it comes to Indian films. It's not something I've really thought about before. Of course, it's not something I think about all the time, with every movie - I'm perfectly fine with following the lives of the hyper-privileged in my fluffy Indian entertainment. On the other hand, when a film references changing times and then doesn't explore the topic in an intelligent way, or adequately to my liking, I guess I lose some of my enjoyment of the film. Lootera is wonderful in many ways, but I wasn't attached to it, and in the greater scheme of things, that's probably both on me and the film itself.
posted by veracious at 11:18 AM 1 comment: