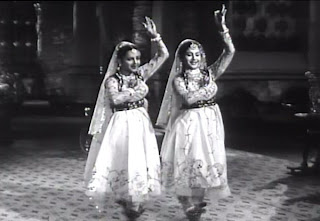 Helen & Cuckoo dancing in Chalti ka naam gaadi.
I'd been considering getting a blog that focused on Indian cinema ramblings and reviews for quite a while, having browsed blogs as in the sidebar's link collection right over there. I loved reading these places and one of my navel-gazing desires was to have a place like them of my own. The reasons were many; first of all, I realized about 80% of my Livejournal friends did not care nor know much about Bollywood, Kollywood and similar. So my related ramblings and squee were lost on them. There were also things I couldn't post on my favourite Bollywood forum, BollyWHAT? and so I felt like one all-purpose Indian cinema blog was in order. After mulling over where to put it, what to call it, what to include in it, I finally kicked myself in the butt and got ".. so they dance!" up.

Why "so they dance"?
Because the name is always the hardest part. I didn't want to call it "this or that Bollywood" because I'm a huge fan of certain Tamil movies and film stars so limiting the blog's title with the label Bollywood felt wrong. The word "filmi" would've been fine, but it'd been used in so many places I wanted something more original.

In the end, it's been one day since I created "so they dance" and I already regret naming the blog this. It came from this Vandals song, "And Now We Dance", but I remember it wrong and"sowedance" was already taken and looked stupid in the urlbar so I thought, "Well, technically it's not me who's dancing so it should be, 'they dance'."

a) that the most logical way to shorten it is STD. I mean, seriously STD! Me and my blog, STD. I mean, I suppose I could pretend that this is some kind of ingenious metaphor for how Indian cinema is sort of like a disease, but at least you get it while making love. But honestly? That's just tacky because even if you love the person you get an STD from, you sure as hell don't love the fact you get an STD. In practise I've come to just use the title, so they dance, or typed together, sotheydance.

This is first of all completely untrue and it's even sort of offending me because I'm one of those people who absolutely hate stupid generalizations like that about something I adore. So the fact my very own blog's title implies this sort of generalization, well, it pains me.

But you know what? As I'm updating this post in early 2010, I realize I've come to actually like the name. It flows nicely.

What now?
Now I start posting reviews and thoughts on movies I've already seen. The backlog is quite enormous.

On the other hand, one good thing about having this backlog is that I don't feel forced to write one entry on each movie. Instead I'll do something like this - group the movies I've seen as I see fit and discuss them, compare them and just generally review them like that. It's going to hopefully less time-consuming and most importantly, more fun for me.

I try to keep this blog sort of free form because while I admire people like Carla of Filmi Geek who can review each movie in a similar format, I don't think I'm one of those who can. Also I want to just be able to babble about the most random peculiar things I like about Indian cinema (there are many).

Why "Indian cinema" and not just "Bollywood"?
Even though I absolutely claim no expertise over the vast majority of India's regional cinema (after all, very few can!), I enjoy Tamil movies and an occasional Telugu movie so limiting this blog to only Hindi film reviews just feels dull.

Words I use and you should probably learn before you read aka Glossary
Some of these are my own creations, some are more general and can't be credited to me in any way.

buddypyaari - pyaari from the Hindi pyaar, meaning - of course! - love. Refers to the excellent portrayal of male friendship in Hindi movies (Southie films may also contain it), both old and new. Sometimes with homoromantic undertones, sometimes not. Some would call this a sad example of the film industry's male-centricness but I call it awesome and fully encourage any Indian film makers reading to make a movie portraying female buddypyaari. Girl power!

manpain - When the male hero of the film angsts oh-so-beautifully in a state of extreme emotional distress. Currently I'm of the opinion that Vinod Khanna rules this genre but I can accept other manpain masters, should I run into such.

kickass - Also known as dishoom-dishoom. I think film violence is entertaining at best and when it's not entertaining, well, usually I find it entertaining despite. The reason I like to call it kickass is because that's what it is.

Sakshay - Refers to the amazing on-screen combination of Saif Ali Khan and Akshay Kumar. Sakshay is the most homohilarious (that word means exactly what you think it means) m/m couple in Hindi cinema history. Their movies are bad and dumb but undoubtedly awesome. Aside from the whole vague gay thing, Saif and Akki both have killer comedy timing and when you put the two together, all sorts of hillarity ensues, even with blindingly bad scripts. See the film "Main khiladi tu anari" for proof.

Words you will not see me use

timepass - This is a word I really try not to use at all, because I don't know what it means. No, I'm completely serious. People seem to use the word in completely contradictive ways, and pack the word with their own, varying definitions. Some will tell me, "It's a good timepass, watch it!" and others will say, "It's a timepass, nothing special." No, no, no! Give me a clear point of reference, "It's a movie worth watching if you like these stars" or "I wouldn't recommend it to anybody, to be honest" or "It was painfully boring" or "It had its moments" just ..something clear. I mean, any movie is timepass because when you watch it, time passes. There's just so much confusion about the usage.

Mog - Friend who I regularly rewatch films with. She's seen around 25 films so far, and owns one Hindi film on DVD because she liked it so much (Rang De Basanti). Notoriously strange taste in men.
Babz - Friend, Mog's sister. Also seen around 25 films, requests we watch more older films.
Steve - Friend, seen probably around 40 films so far, all sorts. She shares my taste with most movies, though I think I am generally more forgiving of flaws than she is.
Stimpy - Friend I got to know online and later personally. I used to borrow movies off her when we lived in the same city. She has a huge DVD collection with just about everything from bad Anil Kapoor films to the best Mammootty films. She got me into Vikram, Siddharth, Southie cinema in general.

I think that's it! Enjoy reading, comment and so on.
posted by veracious at 12:57 PM 17 comments: