London times - No One Killed Jessica & just a smidgeon of Dhobi Ghat. 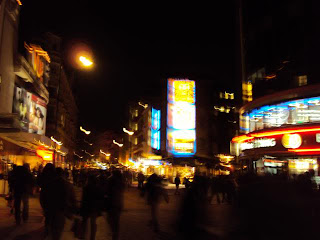 So I visited London a short while ago. As usual, this meant visiting the Ayngaran Video shop in Colliers Wood (which still has friendly staff and amazing deals! I cannot recommend it enough). I'll try to watch all the films I bought uncharacteristically fast and not let the DVD's lie around waiting for me to get to them, so expect a lot of Tamil goodness in this blog soon! But what was also great about visiting London was what is a rare treat for me - Bollywood in an actual movie theatre.

Unlike last time I visited the UK (last year May), I had better luck with what was running while I was over there. Sure there was Yamla Pagla Deewana or whatever the hell that film is called, which I very decidedly gave a miss in favour of No One Killed Jessica - a film I was curious about and had heard good things about, though hadn't actually read any reviews, professional or non. 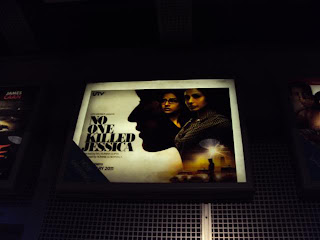 I had a feeling I would like it and I certainly did. Now, being as out of the loop as I have in the past, uhh, I don't know, year or so?, it's hard to tell what the consensus on the film is in the world of Bollywood. When I later on met Daddy's Girl she told me that the reviews for the film hadn't been all that, which surprised me - I'd only seen praise, from Bolly-fanatics and not-so-much alike. I guess it just depends where you look.

NOKJ, for those unfamiliar, is a story that mixes fact and fiction about the death of Jessica Lal, who was shot in a crowded bar full of people but whose killer still went unconvicted for a long time (hence the title). The film's story focuses on two main characters, Jessica's sister Sabrina (Vidya Balan) and Meera (Rani Mukherji), a tough-as-nails journalist who at first ignores the case, believing it not to be worth her time, but eventually ends up working passionately to expose the authorities' mishandling of the case.

That's probably giving a way too much, to be honest. I went in not knowing anything and came out loving it. It was just a well-made movie, and a fantastic example of how a female character-driven film can work just as well as something hero-focused. Vidya Balan shone in the role, so much so I could feel the pain that her character felt, and found myself welling up constantly. I later wondered if I'd ever cried so much at a film. Then I realised I had, of course, wept myself silly at Paa (with also Vidya in it ..coincidence?). And Rani was also great, even if her character's sharp, bitchy edge could've been written a little less over-the-top. I am also just so happy she is doing these alternative types of roles, as opposed to the usual YRF fare. Mind you, I am one of the few who love her even in those fluff pieces, but she's a better actress than to limit herself to roles of that kind, and the self-assured, independent and career-minded Meera was just one of those performances that isn't going to be easily forgotten.

It's a film that tugs at the heart-strings in a massive way, has that lovely against-authority-power-to-the-people Rang De Basanti type of edge to boot and yeah, really enjoyed it. I hope this is a sign of things to come for 2011. Maybe if we get a ton of films as good as this one, I'll jump more actively on the Bollywood-train, because I've just been watching it go by for a really long while now (though I've always kept rewatching old favourites and suchlike).

Unfortunately, when I meant to go see Dhobi Ghat with Ros, luck was not on our side! First all of the trains in her direction were cancelled so she was late, then we went to the wrong screen, then we find the right screen and sit down to watch around 15 minutes of the film, only to have the projector break down so bad we get our tickets refunded. And this was basically my last day so I couldn't go see the film the next day. Based on what I saw, the film certainly looked interesting - Prateik (Babbar)'s looked like a promising performance, and we were just getting to the part where Aamir Khan's character starts figuring out what the tapes left at his new apartment were about. I enjoyed the low-key feel of the film and ...yeah, it was disappointing as hell, even as I got my money back from the £10.70 film tickets. I guess I'll wait for DVD?

Anyway, I realise I really need to get on a move on with this blog! Expect a thinky (extremely!) analytical post on Chak De India which is based on an essay I wrote. I still haven't done my Filmi Year 2010 post because .. I feel like I really have not seen all the best films of 2010.

So let me throw this one out to you.. I've seen Striker, Housefull and ..uhh, really, self, is that it? I guess it is. I will DEFINITELY be checking out Dabangg, Baava and possibly Tere Bin Laden, Band Baaja Barat. In fact, I should go look all of those up on Nehaflix for my next Bolly-DVD order.

But anyway - what were your favourites of 2010? What would you recommend I see? (Knowing my tastes, as hopefully the regular readers do, if just a little.)