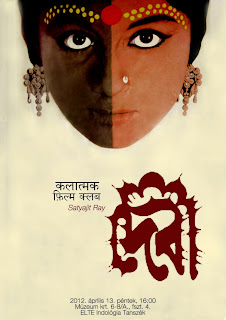 Previously, when I have written about my ambivalence towards art house or parallel films in India (and elsewhere), I may have come down too hard on both myself as a viewer, who gets too easily bored and the stereotypical concept of these types of films as boring and incomprehensible. I think this kind of narrative is so tired and rather poisonous, and I'm kicking myself for ever furthering it on this blog. The fact is, most of my reactions to movies, such as Satyajit Ray's filmography, come down to two factors: my own bias against watching 'classics' just because they are considered by some as classics, and my lack of orientation towards watching these sorts of films. (And yes, this will be one of those slightly tiresome blog posts where I ponder why I react to things the way I do, as opposed to just telling you about my reactions. Apologies all around.)

I've always had this perhaps slightly ludicrous aversion to watching or reading anything that is a classic simply because it's received such a label. I don't believe in entertainment as education, unless there is a legitimate educational purpose to consuming a piece of entertainment (like the fact you're researching something, or a legitimate student of something, such as literature or art or film). I'll watch films considered classic, if and when I want to watch them - when I'm motivated to see what they're about, as opposed to composing a body of works as educational homework for myself. Some will tell you that you absolutely need to see certain films in order to discuss films at all, but I'm not really one of those people. I'll encourage curiosity in others, and in myself, because curiosity towards new things can only lead to great new discoveries and fun.

Some people obviously have a different take on this, and would probably argue that classics are considered classics because they are generally good and important works of art. I'm not denying any of this, as most of my favourite films could easily be considered classics in some form or another. It's just that this is my philosophy when it comes to art, and canonized art. We should recommend things to people because they might enjoy them, not because some sort of consensus has formed that something is important.

As far as my lack of orientation is concerned, that's where Devi and the previous Ray film I watched, Charulata, come in. They both seem to work in a format where themes and ideas slowly build up over the movie, only to reach a spectacular height of dramatic tension in the last ten or fifteen minutes of the film. This sort of cadence is not necessarily unique, but it differs from the films I typically watch. It's not that I don't enjoy it - it's just I'm not used to seeing it.

When I woke up on a Sunday morning and had this sudden idea of watching Devi alongside my many morning cups of coffee, I knew this was precisely why I had this philosophy about classics and art. As the mood struck me, the setting for the film was perfection - and the clear-headed, caffeinated emotional devastation that I felt at the end of the movie, was perfect, too. I watched the characters live in their world, commit their honest mistakes and become trapped in the societal conventions they couldn't struggle out of, because sometimes that is simply how things work.

Devi is, of course, a tale of a Bengali household where the father-in-law (Chhabi Biswas) of Dayamoyee (Sharmila Tagore) sees a premonition in a dream that Dayamoyee is a reincarnation of the goddess Kali. Umaprasad (Soumitra Chatterjee), her husband, is away completing his studies, and he returns to find his wife, living at the temple, worshipped as a goddess.

It's a concise film with excellent mood, tremendously interesting performances - particularly Sharmila - and beautiful cinematography, but I'm still far too focused on the ending, which is a complete punch to the gut, in a good way. It's satisfying in its tragedy, but if I'm completely honest with myself, the journey towards that ending was not as gripping as I might've hoped. What do I do with a film that I only really enjoyed during the last ten minutes? Rewatch it, I suppose, to take in all of those hints of what was coming, before I knew where it was all headed. Much as I did with Charulata, I certainly liked this film, but it didn't work its way into my heart as a favourite. And much as with Charulata, the review of the film turned out to be rather navel-gazing. Further apologies?
posted by veracious at 12:41 PM 1 comment: