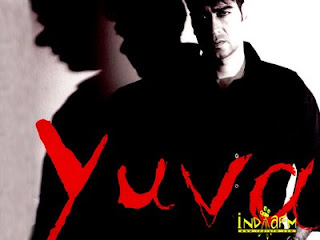 Original category for this day was "favorite animation" but considering how little of those I've seen in Indian cinema and how little I liked what I've seen, I felt this would be a more fitting category.

I'm not the biggest fan of Ajay Devgan (sorry, Devgn, was it?) but I think he's an effective actor all the same. Put in the right roles, he performs well, and even though I personally don't see him as the most versatile of actors, I recognise other people may be of different opinions and love the hell out of the recent Golmaal films. More power to you!

However, I was always annoyed he was put in the role as the "youth leader" in Yuva. Other things annoyed me about Yuva as well - the film just felt way too long for the story it was trying to tell, and though there was the good (Abhishek, Rani), there was a lot of "meh" in between all the good. Ajay was always unfit for the role in my eyes, because he's at his best when his roles are allowed a little world-weariness. He can have humour, he can be a complete badass - but what I think Ajay's best roles have always had, even when he was quite young himself, was a certain steady maturity. To buy him as an aspiring campus politician, I don't know, it just never quite worked for me.

I was never one to be too harsh on Esha - given how much I liked her parents, I always wanted to see her blossom, eventually. Yet that never really quite happened, and she remained rather mediocre until she largely stopped working.  So if we're going to re-cast Ajay, we'll have to recast his opposite as well.

So who to replace them? Tough.Yuva was filmed at a time when Shahid hadn't shown his Serious Acting chops yet (or his Acting chops altogether, really) and a lot of other younger stars hadn't really debuted. (And no, we're not casting Zayed Khan in this!) But does that really matter in fantasy casting? Let's put him, and Vidya (who was working in 2003 but not in Hindi films) opposite each other, and maybe in this alternate universe, Kismet Konnection was actually a good film?

Then there are Kareena and Vivek - both harmless, both occasionally interesting and even cute in this film. However, for better examples of the same roles, you only have to look at the film's Tamil version, where Siddharth and Genelia, despite both being quite fresh at the whole "acting" thing, did well in the roles. Bonus? They both speak Hindi, so no problems there.
posted by veracious at 12:34 AM

True, Ajay seemed just too old for this role. But Shahid would've probably been too young for it. Can't think of anyone just right for the role, to be honest.

By the way, the Tamil version had Trisha, not Genelia. But your point stands.

I'll admit it's been a while since I last rewatched Yuva so you're probably right that Shahid in 2003 was too young. It's hard to fantasy-cast in retrospect. There's some actors that might be the right age but who I just don't find all that good.

And ditto your correction about Trisha! Gosh, sometimes I just feel like I should never write about films I've not watched in a long time..