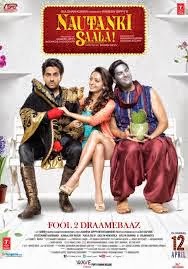 The more films I watch, the more I begin to understand that while there are always plenty of discussions to be had about various aspects of films, the one thing you can't really debate is the viewer's connection to characters. At times films click and succeed in establishing that connection - sometimes it's writing, sometimes it's acting, quite often it's everything coming together beautifully to make you care for the characters, and what happens to them.

Nautanki Saala, a romantic comedy based on a French film Apres vous (adapted with permission, I think), is one of those films where I do like all of the characters but I'm not fully engaged with their journey. Ayushmann Khurana plays Ram, a theater director who saves the life of a layabout Mandar Lele (Kunal Roy Kapoor) and is thus responsible for his life. He hires Mandar and attempts to secretly get back Mandar's former love, Nandini (Pooja Salvi). Things get complicated when Ram falls for her instead.

There are numerous things to like about this film. For one, it's very funny - a particular scene at a restaurant had me laughing until I couldn't breathe, and all the actors do a good job of heightening the comedy. Secondly, the parallels between to Ramayana-inspired play and the actual events was pretty fun. I liked the principal cast, and the film was never boring or tedious. Yet, perhaps there was some tiny bit of chemistry missing in the love story, or maybe the complicated premise robbed that part of the film a bit of its romance, or maybe I was just in an odd mood that day. It's hard to tell sometimes. The bottom line is, I liked the movie, but not as much as I was hoping to. It's making me doubt my initial fondness for Ayushmann, to be perfectly honest - if I liked, but didn't love Vicky Donor, and now I'm getting largely the same reaction to his next movie, maybe he's not yet that good a performer. 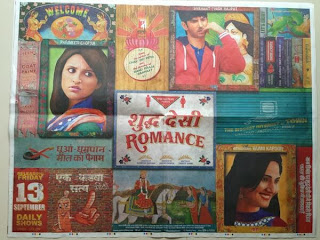 Shuddh Desi Romance delivers precisely nothing that the name implies, which I don't fault it for. I don't need my romances to be chaste, or particularly traditional. Sadly, what the film is also missing is good characterisation. It starts out fast, and introduces its main characters Raghuram (Sushant Singh Rajput) and Gayatri (Parineeti Chopra) quickly as well. They're on their way to a wedding - his - and she's one of the hired guests. He's having doubts, as the marriage is arranged, they talk on the bus, she smokes a cigarette, they kiss. Later, after he's escaped his wedding by literally running away, she seeks him out.

Things move so fast that by the time, about 30 minutes into the movie, when the couple is already running into their first signs of trouble, I began to wonder whether I cared all that much. I sort of knew them as characters, I suppose, but there was never enough establishing them, or their feelings for one another, as to help me have that connection that is so crucial in a film like this. Later this troubled twosome is joined by newcomer Vaani Kapoor's character Tara, seen earlier almost marrying Raghuram, and I had to ask myself, "What the hell is this movie trying to go for?".

Admittedly, it's not easy to write believable young people who are confused about what society wants out of them, and what they themselves want. But some of the vulnerabilities and complications in these characters seem so manufactured and nonsensical. They love each other but they don't want to commit, because one of them says that the other one could never commit seriously and the other one takes offence at that. It got to the point where I just felt all these arguments and endless rapidfire dialogues were pointless - if there were layers to be found, I couldn't make any sense of them. Was something just lost in translation? Or was I tuning out because I just didn't care?

I feel bad because this film got so many things right - I enjoy Parineeti Chopra's performances, and she had a relaxed chemistry with Sushant Singh Rajput. Vaani Kapoor was not bad for a debutante actress, and her smile gave a strong impression that her character was always two steps ahead of everybody else. (Interestingly enough, she'll be the lead in the Tamil/Telugu remake of Band Baaja Baarat, alongside Nani.) The music was cheery and quite fun. The cinematography was stunning, and made me want to visit Jaipur. But that connection, that investment to these characters and what happens to them, just wasn't there.
posted by veracious at 1:08 AM 4 comments: 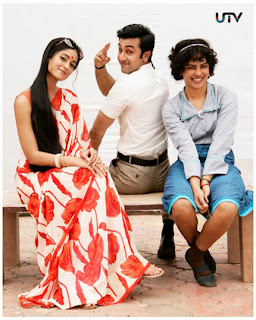 As much as we may all miss the UTV hand, the new opener of UTV movies, with the three dancers and the banging drums, remains an early promise of a quality picture - especially when it comes to good, interesting stories. This is also the case with Barfi, the tale of a death-mute man (played by Ranbir Kapoor) in Darjeeling and how his extraordinary character and joie de vivre impacts the lives of two women - Shruti (Ileana) who Barfi falls in love with, and Jhilmil (Priyanka Chopra), the autistic girl Barfi knows from childhood.

This was India's Foreign Oscar contender of last year, and thus I am rather late to view and review the film. I guess one thing that could be said of it was the mixed reaction - while people applauded the performances, there was some grumbling about "inspired" scenes, which is precisely the kind of thing that puts a damper on a movie such as this one. Barfi tries very hard to be heartfelt, a bit of a tear-jerker and generally moving. For the most part, I felt like it succeeded. The performances are good, and the characters do come alive. The light-hearted comedy, even though quite silly and physical at times, never feels as out of place as it could be - Barfi does a good job in being half this sort of magical realism with its silliness, but also being a grounded film. I liked the film, but I didn't love it - at no point was I moved as much as I think the film wanted me to be. It didn't quite stick with me, despite having such good intentions, and generally doing a good job of fulfilling my expectations.

I guess as ever when stars of Ranbir and Priyanka's calibre pick up really unusual or challenging roles for them, that's the main discussion point of the film. I've got nothing of substance to contribute there - I thought both did well, as expected, and probably served some award nods for their performances, but I just didn't feel that special connection to either character, or the story itself. So despite all its goodwill and good facets, in the end, Barfi was just an okay film for me.
posted by veracious at 4:40 PM No comments: