Don't be a stranger to Anniyan no more. 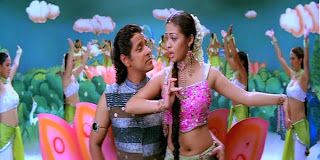 If somebody was to ask me for the most entertaining film I know, I would answer Anniyan (Tamil for 'stranger') before they had a chance to finish the question.

For Anniyan, Tamil director Shankar's big budget superhit from 2005, contains everything a movie ticket ought to buy you. It has the visuals, the comedy, the action, the romance and a bit of social significance, as well. It's just a big damn movie. 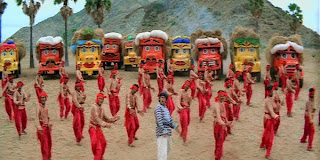 The picture here is just an example of the outrageously whacky visuals you get with Shankar films. And how can you not adore them? It's nuts! It's colourful! He also abuses special effects mercilessly, which amuses me greatly.

The plot of the film tells of Ambi (Vikram), a pedantic lawyer, who annoys just about everybody around him. The girl he loves (Sada) is equally unimpressed with the way he deals with problems in society; he will not let a wrong-doing go, and will lecture at people about even the smallest things. Meanwhile, somebody is murdering people in very unusual ways. Ambi's friend (Vivek) works together with the DCP (Prakash Raj) to solve these cases..

If that sounded boring to you, don't worry. Vikram plays three characters in the film, and Vivek provides some of the funniest comedy I've ever seen. And when the film has an occasional lapse in quality, the hillarity doesn't stop there.

Just youtube the song "Remo remo". I dare you not to laugh your head off.

Yep. Anniyan is a film not to be taken too seriously. You can take in the social message, ponder it, turn it upside down, I will even discuss and debate it with you, should you want it. But at core Anniyan sets out to entertain and oh boy, does it ever. I've seen the movie nearly 10 times and never does it fail to do just that.
posted by veracious at 3:44 PM 3 comments:

Friendship in the 00's: you meet him at college, you get to know each other, you go on a road trip to Goa and goof around in the sun for the dorks you are.

Friendship in the 90's: you meet him at college, you get to get to know each other, play some music together, fence, and realize you are both destined to kill one another.

The latter is Parampara, a 1993 Yash Chopra (!) film, which isn't too easy to find so despite having two of today's biggest stars (Saif and Aamir) and even one yesteryear star (Vinod in his 90's avatar), not all that many Bollyfans seem to have picked this one up. When you see it, you know exactly why.

If you do manage to dig up this film somewhere, please note the fact this is my man Saif Ali Khan's first film. He's all kinds of ridiculous but, I do also want to point out, oh-so-young.

To summarize Parampara, I will use the only screencap I will ever need of Dil Chahta Hai: 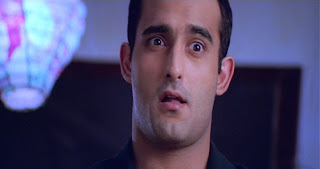 Thank you and good night.
posted by veracious at 10:58 AM 6 comments:

The name is Rajnikanth. But in here, it's Muthu. 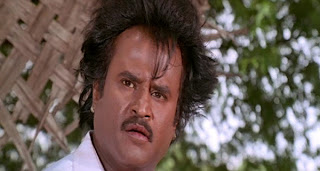 No Indian film enthusiast should go through life without seeing a Rajnikanth movie. And it still took me around four years of watching Indian movies to get to my first Rajnikanth movie. But boy, was I glad I finally did.

Muthu is a mid-90's goofball masala fare. I don't know where it stands amongst Rajni's filmography, but I really loved it and just for the way it utterly convinced me of Rajni's talent and persona, I'd call it one of his best performances (even without seeing any others). Rajni plays the loyal servant Muthu, Meena plays a drama actress Ranganayagi, to whom Muthu's master falls in love with. At first Muthu and Ranganayagi don't like each other and one of the loveliest treats of the film is to watch them bicker, but due to some circumstances they get stuck together and well, you know the drill.

There is plenty of peculiar, funny comedy in the film and it keeps it fairly light for nearly 2 hours, which I liked - there are underlying tensions the whole time, but they don't bog down the story unnecessarily. Even Vadivelu - the comedian very often featured in Tamil films - amused me a ton in this movie. 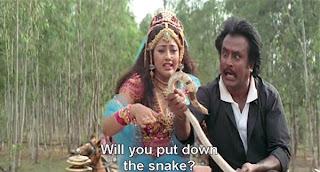 Told you it's goofball.

The biggest surprise wasn't really Rajnikanth and the fact that I could actually stomach him despite his lack of looks and his no-lack-of years gone by, it was that I genuinely enjoyed the romance in the movie. Piyaara broke some of the charm by telling me that the actress opposite Rajni actually starred in one of his earlier movies as a child star (uh, that's some age difference) but regardless, it has to be said that the romance is cute and comedic.

I would definitely recommend this movie. It's completely crazy but awesomely entertaining, and has gorgeous song picturizations and catchy music and ..I'll let Meena's sweet face just lure you in. 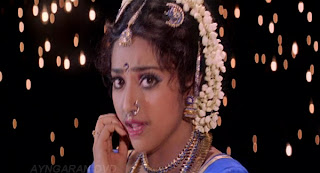 Oh, and did you know this film is the most successful Indian film in Japan? Because it is, released under the title "Muthu the Dancing Maharaja". Well, they got the 'dancing'-part right, at least.
posted by veracious at 8:32 PM 3 comments:

Dear Abby, is my husband a murderer? Shaque. 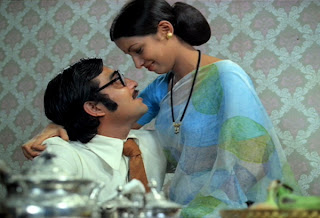 On paper Shaque looks like a Gulzar movie; both of its stars zigzagged between mainstream and not-so-mainstream cinema (Shabana more than Vinod, though) during the golden 70's, and the film's title and subject, suspicion and what it does to a marriage, has the potential to live up to an interesting human drama of sorts.

The sad thing is, it doesn't quite reach that. 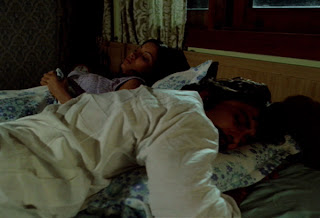 Vinod and Meena's happy marital life becomes strained after Meena receives a letter from a person claiming to have seen Vinod murder a coworker years ago. At first she refuses to believe it but there are suspicious signs - how come he needs the help of sleeping pills to rest every night? Where did he get all that money years ago, when they had a baby on the way and were struggling to find the means to survive? Meena's suspicion continues to grow and tensions in the marriage build up.

There's nothing that awfully wrong with Shaque, maybe apart from somebody getting lazy with the script writing by the end. It starts out an okay drama with a couple of standout moments, and all the actors do a good job with what they have. It's not Shabana's fault that Meena comes off as hopelessly easily lead by various people and more than a little naive. Closer to the end, you see her make conclusions that are peculiar to say the least, but overall the quality of the script plummets so bad during the same time, it's hard to blame her. The film turns into a peculiar masala thriller of sorts at the end, more ridiculous than anything.

But onto the positives; one of the reasons I had Gulzar on the brain during the first half of the film was that I saw his name on the credits as 'the lyricist'. And indeed the lyrics were often poignant and fitting to the situations of the movie. Otherwise the soundtrack was bland, and all the songs were integrated in an unconventional "they're listening to the radio" manner, which might've worked, had Shaque stayed consistently non-mainstream to the end. 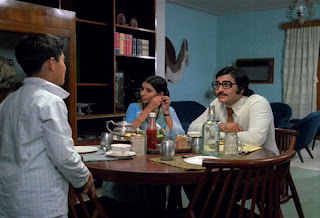 And I suppose the script wasn't all bad. The intrigue of whether or not Vinod actually committed the murder is played up so that it takes a while until the viewer figures out how things really came down. A thing or two can also be said about Vinod's acting - there are times where his experience in playing villains really shows. Another plus was the way the film portrayed marriage, its bliss and eventual decay.

I of course was lucky enough to watch this in sync with Filmi Geek, which was fun especially when the film veered off to the WTF zone of unknown. I'm not sure how to recommend the film itself; it's merely alright, and has those persuasive positives (daring bed scene! Vinod on a horse! snuggly Shabana-Vinod jodi!) but also those peculiar negatives that just rather spoil the ride.


* Bonus fangirly note; 70's glasses? Always a riot. Pink shirt towards the end? I was so massively amused I cannot even picture. Manpain? Sufficient. In conclusion? Still the hottest oldie actor, yes indeed.
posted by veracious at 12:03 AM No comments:

A round-up of sorts.

I was going to type up a post about an old favourite of mine, Anniyan, but instead got an idea to do this..

That's it from me for now.
posted by veracious at 8:13 PM No comments:

Well, here it is finally.

I've watched a few films since I last posted but I won't talk about them, because last night, instead of watching a film, I made something cool.

Somebody said fanvidding is the geekiest thing there is to do. If so, I have just crossed the final frontier.. 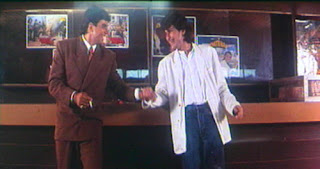 It is, of course, Sakshay. Specifically, Sakshay from Main Khiladi Tu Anari, set to the wonderful music of Spice Girls.

I've uploaded it on about a million places because the video streaming places do a bad job of conversion of this file, which sucks, but yeah.

Stream it here. Or here.

Enjoy it!
posted by veracious at 5:37 PM No comments: