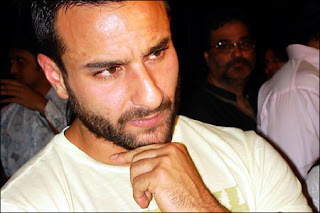 Stars don't have it easy, as this picture of the deeply frowning, pensive-looking Saif Ali Khan demonstrates. Interviews are a tough gig; how to not show your deep hatred of journalists while answering their questions to make sure you do your bit for some film's marketing. I don't read a whole ton of interviews but based on what I've read of Saif's, I can say this dude does not dig the journo's. As probably don't a lot of stars, he's just not as good at masking it.

But I was reminded me of some of my favourite star interviews when listening to the LoveBollywood podcast from months back which featured Shahrukh Khan and Lara Dutta discussing then-new Billu (Barber).

One of the hosts: Shahrukh, how should I do my hair?
Shahrukh: But then what will we do to your face?

Call me weird, but I laughed out loud at that.

So, some of my favourite interviews that come to mind...

BAFTA goes Bollywood with Aamir Khan - Aamir's interviews tend to be favourites of mine because the man has a lot of good stuff to say but this one stands out because in here he talks about getting into the physicality of his characters. While some non-fans will roll their eyes at his lite method acting discussions, it's a great interview, very interesting and a must watch for people who love the guy.

Most Salman Khan interviews - I don't get the vitriol some people have for this guy. Sure, he's past his heyday and has the worst picks in films sometimes, and there's a lot of very nasty rumors about him circling around. But in interviews he always seems like a really relaxed guy with a clear sense of self and a truly quirky sense of humor. I'd link to the CNN-IBN interview that made me well aware of this fact some years back but I can't find it.

Farhan Akhtar on LoveBollywood when Rock On!! was releasing - Since this is no longer available on the BBC website, download link here. Farhan talks about how he got into acting, how he wrote and worked on DCH, and his other films, too. He's a smart chap, and this is one of the best LoveBollywood interviews I've listened. I loved it the first time I listened through it, and after I saw Rock On, I had to go back and give it another listen.

Koffee with Karan, season 1, Abhishek & Preity - I thought KwK was always an incredibly overappreciated chat show. Karan was not the best of hosts, but some episodes really stand out because the guests are friends with each other, and friends with Karan and actually comfortable enough to discuss interesting things and even mock Karan a little. This is one of those episodes. And it made me want to see them together in a movie, which happened eventually in the form of Jhoom Barabar Jhoom. Since the series got a DVD release, it must have been yanked down from youtube, but if you can, seek it out and watch it.

Siddharth on Filmfare (aka the True Angry Young Man Interview) - Scans of it here. Newsflash! Sidd is no big fan of journos, so much so I feel bad for the interviewer. This dude comes of as cold and refuses to discuss anything not to do with his movies. He has some very strong opinions on South vs North which I can agree with, and even on the success of his own movies. Siddharth's an unique character in the film industry - not really there to make friends and rub elbows with big names, just to work and do his best at it. Fascinating interview on the real personality behind Indian cinema's cutest face. (Only for true fans; some non-fans might be turned off by this.)

Bluffmaster's making of - This is either the most honest interview ever or the most honest deceitful one. Probably the latter. It's just fantastic. Riteish talks about how he's the real star of the movie, Abhishek talks about why people call Boman Irani a great actor because he's old.. It's just great. Search it on youtube if you don't own the DVD yet.

So here were my favourites (or some of them). How about yours?
posted by veracious at 1:03 PM 6 comments: