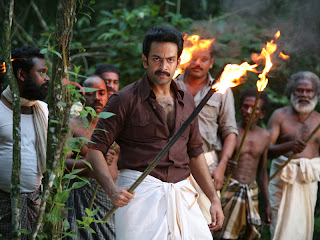 I meant to post about this film on May 1st, to kick off Red Salute Blogfest, but got lazy - in fact, I've been so lazy I've still got plenty of films that I meant to review to actually see. Therefore I'm dedicating the first half of May to this thing, possibly even longer.

Thalappavu is a 2008 Malayalam drama about a real incident between a Kerala Naxalite (played by Prithviraj) and a police officer (Lal). In the 1970's, the police held a Naxalite in captivity and then arranged a 'fake encounter', essentially an extra-judicial killing, or simply put, murder. The officer who held the gun apparently knew the Naxalite (I think the officer later disclosed this at an interview). The film works in flashback, beginning from the shooting and telling, little by little, the story of these two men. 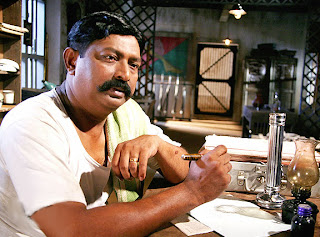 In the very few Malayalam films I've seen so far, I see a theme of flashback narratives emerging. A central device in how the story is told is constantly with-holding some information from the viewer - we find out answers to our questions, but we have to wait for them to emerge. The story here is at heart quite simple, but the narrative device keeps the audience hooked, and this really serves the film. At times, I may have struggled to follow a little - essentially, there are at least three time-lines we work in, and it can take a while to understand which one the film is at and at which point it switches. Still, it makes the film very interesting. I can't say I was ever bored, which might've happened, had the director taken a more conventional approach to telling his story.

As far as the portrayal of Naxalites go, it's very positive. Joseph (Prithviraj) is a sympathetic, smart individual, who's prone to violence but for a good cause. Contrast this with the police, who are cruel and exceptionally corrupt. The sole good cop is Raveendran Pillai, the cop who befriends Joseph, but even he can be talked into dirty deeds by the other police man. It strikes me as somewhat simplistic to portray the Naxalite in such a positive manner, but on the other hand, this man died because of a horrible, sad and undemocratic practise by the cops. Perhaps it's fitting that regardless of his crimes (which he wasn't found guilty of, because of this fake encounter) he gets a salute by the filmed version of his life. 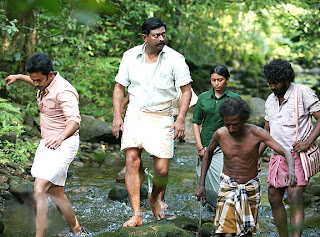 I confess I don't know all that much about Kerala's vast Marxist history - I just know there is one, and that Marxist thinking seems fairly mainstream in the state's politics. What impact it has left on the state as a whole, I couldn't analyse. What it did made me think was the fact that the term "Naxalite" lumps in a rather vast amount of people. The 1970's Kerala Naxalites were probably different from West Bengal 1970's Naxalites, and the current crop of Naxalites is a vastly different group, as well, in terms of both composition, ideology and goals. I haven't seen enough films to know whether all of these groups are labelled more-or-less as heroes or as villains, or neither, but so far I have a sense that it's easier to portray them as anti-establishment/pro-people heroes, than as villains.

Still, I enjoyed Thalappavu, for it's clever narrative device and its lush cinematography. It didn't become an instant favourite, but I'll probably be rewatching it. Atul Kulkarni does a brilliant turn as the film's villain, Lal was very effective in his role and I didn't mind Prithviraj, either. I've watched two other Prithviraj films that I have to post about eventually, so I'll discuss him more as an actor in that post. Suffice to say at this point, he's not really a favourite of mine, which is a shame. I really wanted to like him, a lot, after the brilliance of Aiyyaa. Sadly, I've been left rather lukewarm, even based on what I think are labelled his better films.
posted by veracious at 8:02 PM 2 comments: