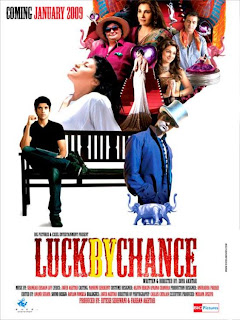 Helsinki International Film Festival, which typically takes place in late September, is the only time I get to see Bollywood films in a Finnish theater. It's always a special occasion and therefore it matters a lot which films get shown, as the last thing I want is for the highlight of my Bollywood year to be a crappy film I had no intention of ever seeing, or have seen already and absolutely hated. Last year, they went for Shahrukh's Billu (incredibly unfortunate way of spelling the name, as it sounds like a slang word for female genitalia to most Finnish ears!), which I quite liked (review here) and Jodhaa-Akbar. The year before that, Chak De India.

So their picks have been quite good in recent years and this year they definitely hit the jackpot - two films I hadn't seen and especially in the case of Raavan, REALLY wanted to see.

Now the first film, Zoya Akhtar's directorial debut Luck By Chance was a fun watch among the festival audience, who typically aren't all Hindi film afficianados. My friend's boyfriend commented afterwards that he thought the film fell nicely between the two types of cinema often to be considered polar opposites - Bollywood and Hollywood. I agreed with him; there was the trademark sentimentality to mark this was Indian, where feelings are allowed to be shown, but there was also that groundedness and low-key acting that is familiar to people who mostly consume Hollywood films.

On the other hand, the story wraps and tangles itself around the inside workings of Mumbai's film industry. Virtually everybody making films in the city features in the movie, so much so writing a list of people who aren't in the film feels like less of an imposing task. The cameos are fun to spot but most praise should go the familiar faces we see in actual roles; Rishi Kapoor as the producer, Juhi Chawla as his wife, and Dimple Kapadia as the former starlet.

The main plot tells the love story of two strugglers, outsiders trying to make it in Hindi films; Vikram (Farhan Akhtar) and Sona (Konkona Sen Sharma). Konkona, as ever, is an utter delight but I found myself being not that impressed with Farhan's performance. While I loved him in Rock On, in here it just shows too much that he hasn't done acting a lot, and while Vikram starts out as an intriguing character, he ends up rather a puzzlingly empty one. I don't know what he's feeling because Farhan isn't projecting anything into the character. He's just there, looking wooden.

So that's my biggest complaint about the otherwise good movie. It doesn't make my favourites list, but I am so very glad I finally saw it, and that I also got to hear viewpoints from two people who hadn't seen a whole ton of Bollywood. And of course, Baawre remains an awesome audiovisual experience, one of my favourites. 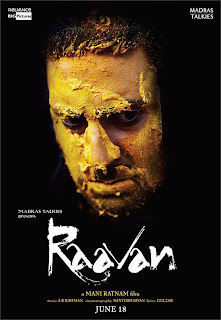 Raavan is such a difficult film to talk about. I was set out to love it; Aishwarya acts well in Mani Ratnam's films, as does Abhishek, and Vikram of course I know to be stellar in nearly everything he does. ARR soundtrack, excellent cinematography to expect, intriguing epic basis for the story in Ramayana and we're pretty good to go, surely? Well, not so much.

Aishwarya's Ragini is good; she doesn't submit to her status, even when she becomes a plaything between two men and their power struggle. She's strong, she's fearless yet vulnerable, she's just a very intriguing, good take on the Sita character. Abhishek's Beera is interesting, as well, but I can't really get a hold of this character. I prefer Abhishek's performances in Yuva and Guru, where the characterization is strong enough to fit the excellent performance. In here, the character feels a little under-written. He has a background, he's got motivations, he's got his quirks, but there doesn't seem to anything that ties all of these together and would make the performance really incredible.

Vikram as Dev is more straight-forward and therefore better, to the point where I struggle whether the fault in why I don't feel the same about Beera, the main character of the film, lies in acting ability or script or what. The plot comes off as a tad uneven - it's slow-moving, then it's fast, then it wastes time on songs with very little connection to anything (and aren't all that). I was interested in where Aishwarya's character would end up so I wasn't exactly bored, but there was just something about the film that makes it all seem like a bit of a mess assembled from really good components. The cinematography, for example, is amazing, and the mood of the film is occasionally really good.

I might've just had extremely high expectations - god knows that's happened before. But I came out of the film a little unsure, and my friend was pretty underwhelmed, too. I've seen 20 minutes of the Tamil version on youtube (the rest was blocked) and will probably see how I feel about Vikram's take on the character Abhishek played here.

My most positive feeling walking out of the theater was this: I cannot believe I've finally seen Vikram on the big screen, something I never imagined I'd get to do. Let's hope it won't be the last time.


(Once again, sorry for radio silence. Other interests have completely taken over my free time, and uni's pretty demanding this year as well.)
posted by veracious at 2:13 PM 2 comments: