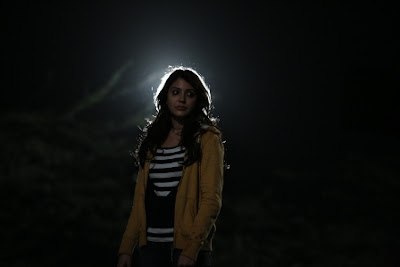 NH10 - I went in not knowing much about this one beyond the initial premise of an urban couple getting mixed up in rural violent disputes along the highway. I also probably won't ever go back to this one, such a brutal watch it was, but this one really nailed so many things I didn't expect it to. Anushka Sharma delivered a career-great (or career upper echelon but hopefully not the best we get to see out of her yet) performance. The mood was fantastic throughout, capturing the terror and the panic and the constant threat of violence looming over. The soundtrack underscores the mood, and the milieu is perfect for it, too. Enjoyable, but tough, precisely because of how real it feels. 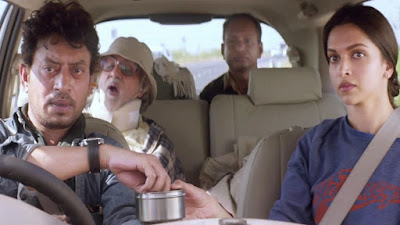 Piku - This tale of bowel movement and road trip and family bonding and tentative romance feels like precisely the worst kind of "quirky" film you could imagine, and yet it's one I'll probably find myself recommending the most. The strength of the script, that immediately allows you to feel at home with these characters, added to the strength of the performances (Deepika has probably been this good before, and even so this feels special) simply makes Piku a delight. I just sat there, watching it, being awed and delighted by its world and its humour. Amitabh and Irffan are fantastic here, as well, but their value has been demonstrated before, whereas Deepika Padukone is making great strides as of late. I love that this was a hit. 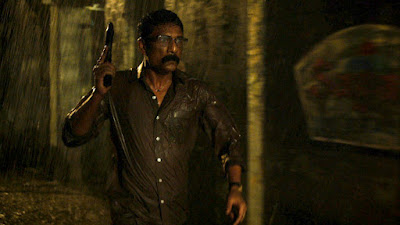 Sunrise (2014) - A French-Indian co-production was one that I felt safe taking my Bollywood-hating friend to, as the whole thing clocked in around 90 minutes of running time and did not seem like your standard crime fare. Adil Hussain leads in this noir indie where rain is a constant and the narrative dips in and out of reality as we follow the cop Joshi chase shadows on the streets of Mumbai as multiple children are turning up dead. A sort of b-plot follows a group of dance girls in a heart-breaking portrayal of the underworld. I don't particularly want to get too deep into everything that happens, as the film (directed by Partho Sen-Gupta) is so small in scale and its objectives that it's best viewed without knowing too much. I saw it at a festival, so I don't know how widely it's been released yet, but worth looking out for. 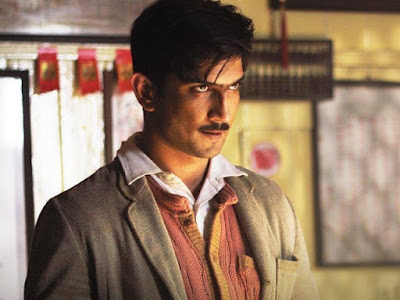 Detective Byomkesh Bakshy - Sushant Singh Rajput had impressed me so little in his previous films that the poor man did not even have a tag on this here blog, following his debut in Kai Po Che and his second film Desi Shuddh Romance (which I hated). But with this Hindi adaptation of the famous Bengali detective novels, he's arrived in a big way, both to my graces and in the industry in general. I loved this Dibakar Banerjee film, in its 1940's Kolkatta milieu and noir style cinematography, the story in all its twists and turns and fantastic supporting cast. And that rocking soundtrack, by god. This might not end up being my favourite of 2015 but it'll probably at the very least crack top five, and I look forward to any possible sequels,
posted by veracious at 10:32 AM 3 comments: 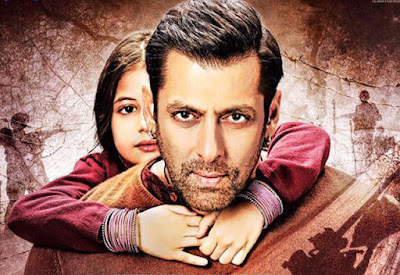 Bajrangi Bhaijaan - When you haven't been watching any Hindi films for months and months on end, it feels rather lovely to be swept up in the melodrama again, and this Salman Khan starrer certainly fit the bill, what with Pakistan-India unity themes and the missing mute child of it all. I can't say I hated it, but towards the end it was just a tiny bit too much. Loved seeing Nawazuddin Siddiqui pick up that mainstream paycheck, even if I wasn't huge on his role in this.

Oh, and Kareena Kapoor Khan was in this film, too, a fact I barely remembered until just now. I don't want to say she should pick better films, since maybe none are coming her way any more (lamentable fact of life for married actresses) but I do miss her putting in better work than this. 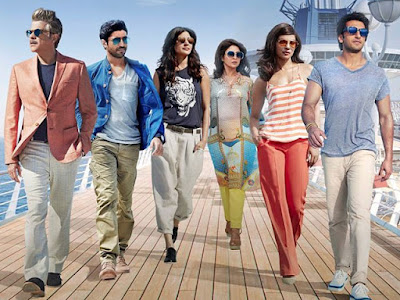 Dil Dhadakne Do - Speaking of Kareena, would have loved to see the original cast for this, which was Ranbir-Kareena as the siblings who were eventually played by Priyanka Chopra and Ranveer Singh, and Madhuri as the mother (a role that went to Shefali Shetty, who is great here). Still, had that happened, what would have ended up on the screen probably would have been the same, middle-of-the-road family drama with some emotional moments, comedy and dance numbers. I really enjoyed this one, but with the caveat that from the intermission I knew it would be a hopelessly forgettable film. The characters are just a little too bland and stereotypical, the drama predictable and even the twists rather unexciting. It's pretty and it's fun, and then you never think about it again as the credits roll. Indeed, my biggest take aways from the film were the following three things: 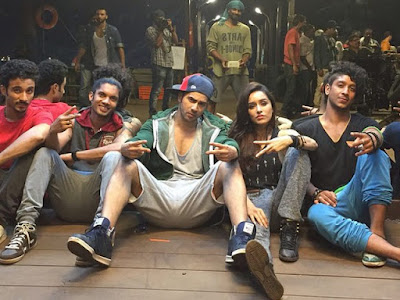 Any Body Can Dance 2 - This one blew my hair back. Is this a movie? Is this just things happening on celluloid in a somewhat sequential manner? Was ABCD the first this bad and I just didn't notice, too swept up in the glorious dance sequences? ABCD2 sure feels like a non-movie, with things happening to characters one barely knows, with every frequent conflict solved two lines of dialogue later by multiple deux ex machina, with cardboard cut-outs having emotions like stickers attached and removed easily for plot convenience. The dance sequences are okay, but with absolutely no emotional connection to anything else that is happening, they feel strangely hollow. I enjoyed seeing the familiar faces from the first film, including Lauren Gottlieb, but holy moly. Don't suffer through this one like I did, even for shirtless Varun Dhawan and some okay naach-gaana. 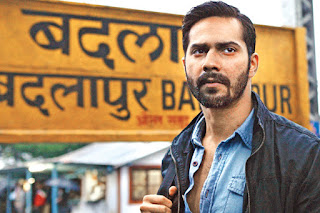 Badlapur - Am I going to hate Badlapur, I asked my Twitter timeline multiple times, seeing the review summaries pop up here and there, and for the most part people either let their silence on the matter speak for itself, or just told me a flat-out "most likely". But what with director favourite Sriram Raghavan (yes, I know Agent Vinod happened, but I blame that one on Saif), established favourite Nawazuddin and emerging favourite Varun Dhawan, how was I to ignore this film? It was the bane of my existence until I would finally see it. So I did.

In another mood, another time, this might have become one of my flawed favourites, one that I could re-watch and re-examine for themes and nuances in performances, but at this time, during the mood I was in, I checked out about 40 minutes into the film and never quite checked back in.The tale of revenge turning one man (Dhawan) into a monster as the culprit (Siddiqui) withers in jail is certainly an intriguing one, especially held up against the empowerment through revenge narrative that was Raghavan's first film Ek Hasina Thi (11 years old this year, wow). And yet, when it was all said and done, I wondered if I should have just rewatched his debut.

Raghavan remains a capable director, allowing his leads to shine and for audiences to gain new appreciation for their range, but the "women problem" remains. Huma Qureshi, Yami Gautam, Divya Dutta and Radhika Apte all feature and do great with what little they're given, but the way the other characters or the camera and narrative choices treat them doesn't sit right with me. Sexual coercion can be played up in a way that empathises with the victim and recognises the perpetrator as vile, but instead such scenes are merely used for titillation for the camera and as a demonstration of the male lead's sickening power over his victims. It is disturbing to me when the narrative doesn't condemn a morally ambiguous character's misogyny but instead throws it up on the screen unquestioningly as a fact of life. It's all about choices in portrayal, and Raghavan seems to make the least considered ones each and every time.

Some years back I talked about how Kucche Dhaage, a 70's drama thriller, deconstructed the revenge tale so often found in Indian films. It portrays the horrible things people do for revenge, and also how this desire to avenge wrecks the people involved psychologically. In some ways, it lets these human monsters off the hook a little too much, giving them a redemption arc on the second half, whilst also showing that since they've devoted themselves to the violence of revenge, they can't ever lead normal lives after it. Badlapur, in many ways, is an even more brutal, and unrelenting deconstruction of revenge narratives, but as Indian films often are, it's still too concerned with its murky lead, not his victims.

As much as I hated this film, I'm not ready to give up on Raghavan yet, such is my deep affection for his first two films. But would I recommend this one? No chance in hell.
posted by veracious at 9:54 AM 11 comments: 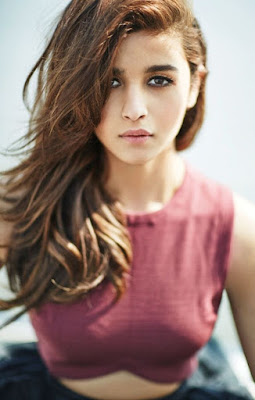 Here is what has happened in 2015 so far


And that's really about it. I'm trying to play catch up with recent Hindi films and it's been going swimmingly, and I'm enjoying it a lot. What kind of bugs me, though, is the recent trend of a lot of Southie films, particularly Tamil, seeing absolutely horrid DVD releases with no subtitles. I guess the way things are headed, DVD is dead and streaming is king, but I'm still the loser who values physical objects (my Indian film collection is proudly on display in my apartment), and should I want to dive back into DVD hoarding, I would hope I could find some of those newer Tamil films, too. In the meantime, though, I should probably investigate these new streaming platforms more.

What's been up with you?
posted by veracious at 8:36 AM 2 comments: