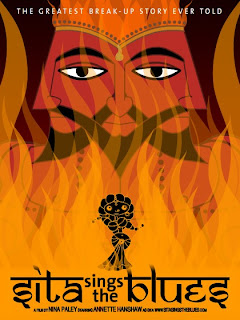 I don't normally talk about animated films on this blog, and I typically don't cover non-Indian films, either, but for this film, I will make an exception. Sita Sings the Blues (2008) by Nina Pailey, happens to be that good of an animated film, and better yet -- legally available for free online, at Archive.org (you can select whether you want to download it or watch it online streaming - I downloaded the small file version and put it on my iPod). 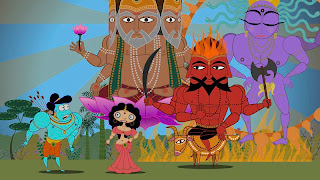 The film uses various animation styles and tells the parallel stories of Sita in ancient Ayodhya and Nina in modern day San Fransisco, with clear focus on Sita. There are song interludes using jazz songs sung by Annette Hanshaw to portray different stages of Sita's tale. Besides these interludes, the musical score of the film is excellent, providing perfect accompaniment to the fantastic animation.

At first the variation in style may seem a bit random, but very soon a pattern emerges. Nina's story is animated a certain way, the songs another way - and my favourite part, the narrators accounting and discussing the story as it moves along, explaining and relying on each other for certain details, in its own style. 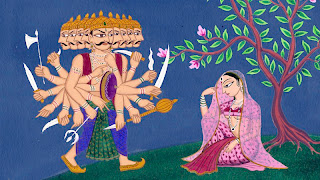 The film is partly hilarious, partly sad, sometimes ironic but riveting throughout. The story of Sita is something I only learned about very late in life (as with most information on India) but it captured my imagination. The way the narration discusses the story from a modern perspective is really interesting, and what also fascinates me is the different versions of the story told. I have, for example, heard that a lot of South-Indian versions of the tale portray Raavan as not really a villain at all (this film seems to somewhat agree).

Another reason why you ought to watch Sita Sings the Blues? The upcoming version of the story directed by Mani Ratnam, which looks to be super-interesting, as it tells the story from Raavan's perspective. If you're a non-desi like myself, and haven't looked into the story yet, this is one version you can get acquintanced with. It's accessible but not over-simplified.

It is seriously so worth the watch, and a dozen more. And - may I remind you? - free, legal! For your further convinience, here is part 1 of it on YouTube.

Give it a go, I doubt you'll regret it. If you need more persuasion, check out Memsaab's screencap-filled review.

A Note: I've seen a lot of debate about Paley's reinterpreting, whether her whimsical outlook is insulting to those Hindus to whom these are not just stories but stories of their god(s). I totally respect that, and if somebody doesn't want to watch the film for the unease it puts them in because of their faith, I completely understand that. I think it's not offensive at all, but I'm a total outsider. I think many Indians - Hindu or not - have enjoyed this take a ton, so I'm not taking back my recommendation, just qualifying that people can have their own personal reasons for not watching the film & that's cool with me.
posted by veracious at 12:24 PM

Understanding Hindu epics is not that easy,they have hidden meanings and ultimate purpose is to attain enlightenment by an individual .. refer this article on "The Abandoning of Sita" http://prekshaa.blogspot.com/2010/03/abandoning-of-sita.html