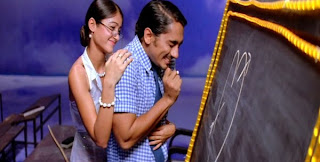 Even as a fan, I find fans fascinating. And more than just generally fascinating, I think the process of becoming a fan is really intriguing, specifically the process of how one builds a knowledge about their object of fandom.

I remember one of the first times I met up with Stimpy, back when I had seen barely any films, and she threw around all these oldie star names I had no context for. I think she said something like, "It just seems like every Shammi film I watch nowadays ends with him and Pran chasing each other in a comic fashion." and I was just like, "Who's Shammi? Who's Pran?" but even as she answered, I couldn't really contextualize the two properly, having only seen maybe three pre-1980's films.

I think what happens when you're a non-Indian fan of Indian cinema, is that you suddenly come upon something that you've either sort of known about (it's been in your periphery) or haven't had any clue about, and little by little you build a knowledge of it. But your knowledge is based on what you watch, when you watch it and how you watch it - whether you focus on oldies, newer films, fluffy films, tearjerkers, plain masala, socially conscious, more arthouse films, Hindi, Bengali, Telugu, Tamil, Kannada.. And when I was a newbie, I became accutely aware of all my blind spots, all the blanks I had to somehow fill out to get a picture in my head of what other people were talking about.

Eventually the blank gets filled out. You learn who you like, who you choose to focus on.. You learn that not knowing who's Dino Morea is actually no great crime on your part. Not knowing who Salman Khan is, however, would be a different story. And the way the utter blankness gets filled out, but never completed (because nobody can know everything about Indian cinema -- there aren't enough years to live on this planet to do so), that's really interesting. And one of the things I kind of struggle with is how to write "newbie-friendly", so that I don't take for granted that everybody knows who so-and-so is, and so my posts can be more easily contextualized even if you haven't seen over 150 or so films. 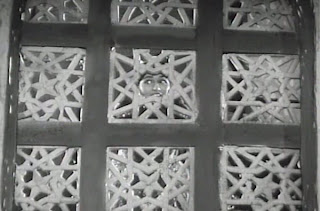 Of course, Indian (or NRI) fans of Indian cinema are possibly even more fascinating. For them, it's not necessarily a blank slate they fill out slowly - it's different variables of ground knowledge, knowledge of language and culture (but not some other languages, some other parts of the culture), it's watching films when you're a kid you now can barely remember (or remember extremely well), it's having a mother who loves Rajesh Khanna films because that's what she grew up on, it's quoting Sholay because other kids are quoting Sholay, not because you've seen the film yourself.. It's taking your family to the movies. There's so much there, so many individual "how I became a fan" stories, and if I had my way, everybody would be recounting these stories because they are so cool. A lot of them may seem self-evident to the people recounting them (like watching films off TV) but those of us who haven't lived through them will find them interesting.

This isn't to say we are all operating on completely different playing fields, as obviously we are watching the same movies, even enjoying the same movies, and agreeing on things left and right, whether we're newbies, seasoned fans, Finnish, Indian, British NRI or Nigerian. But I think we all have our own ways of contextualizing things, giving them a place in our knowledge sphere if you will. (Does that sound pretentious enough?)

There's always going to be a million and one Indian films you could watch. But your choices are yours, as are your views. What we can give to each other is knowledge of what we've yet to look into, recommendations, and stories. And I think we should tell more stories of how we watch films, instead of just talking about the films, to give context to our own film experiences. But coincidentally, I may actually be the only one..
posted by veracious at 1:27 PM

I may actually be the only one..

You're most definitely not alone!
I, personally, LOVE reading stories of how people discovered Bollywood, how they're watching Indian movies in the context of their culture and how they're relating to some points and completely rejecting others...

Not to plug or anything, but here's my first post, that deals a little with my first Indian movie experience - http://anisha-lalaland.blogspot.com/2010/02/k3g-or-start-of-addiction.html

Girl, you hit the nail on the head! I agree with this 100% and I try to add a little "BYOC" or "Bring Your Own Context" to films that I see - whether it's Dutch Disease and Sehar or musings on luck and watching Luck, using films as a lens to see ourselves or culture more clearly is something worth exploring.

This is such a great post - SUCH a fascinating topic, I totally agree with you! I love knowing why people choose the films they do and relate to the stars they do, especially because getting into Indian cinema seems a bit like a crazy maze - you start at Point A (fascination with Shahrukh Khan, for instance) and somehow find yourself a little while down the road having taken several detours and twists and turns at Point J (obsession with Manmohan Desai films) and then Point M (Govinda's dancing!) and etc...

As the comments above mine have said, this is a great post and you are definitely not alone. There is a thread on bollywhat about how people got interested in Bollywood, how it has changed their lives and how they are trying to get others interested in Bollywood. The first one is interesting, the second is quite touching really, I think someone spoke of a very broken relationship with their sister but when they got into Bollywood, they realised the value of families and mended that relationship, which was sweet. The third is just funny.

Ness - Yeah, it is one of those things.. You start out just wanting to see some films and pretty sure it just gets out of hand completely. :D

MsBlogger - There are so many stories of people's film experiences, some meaningful, some a lot less meaningful. It's very interesting.

I've been thinking, too, re: a topic we've brought up in the past, that among us non-desi fans there are some who feel the films emotionally and others whose appreciation tends to be more on a camp perspective... It's a big divide, for sure.

Hmmm just saw Filmi Girl's response post - which was awesome - and her comment above, re: the emotional appreciation / camp appreciation divide.

I can only speak for myself, but I think that you can love Bollywood in both ways. I know I am certainly guilty of MUCH camp appreciation, but there are some films I deeply deeply love and feel on an emotional level, more so than any Hollywood film.

Hmm. There's a post in this I think. Damn, girl, you raised a good topic!

@Ness I agree that you can live on both sides of the divide but I've had issues with people camping up films I identify with emotionally and it's... difficult. I'm sure I've done the same to others (see: my inability to take Akshaye Khanna seriously.)

And I think that is a good idea for a post!!

Really interesting piece... I always love to learn about people's personal experiences with Bollywood, and I think that's one of the very best things about interacting with fans from varying backgrounds.

FG - Hmm. Yeah, I have an aversion towards thinking of Indian films as camp and appreciating that aspect of them. I mean, sure, some films can be taken as such (so bad they're good, like Main Khiladi Tu Anari) but I think camp enjoyment underestimates the cinema as a whole (as something that contains as much variety as anything). I mean, you have films like Lage Raho Munnabhai or Omkara or Black Friday which will surely impress most people, regardless of whether they know much about Indian films.

Daddy's Girl - So true. Before I got to know some Bollywood fans from all over I had no idea Bollywood was big in Russia, Nigeria, Germany.. Obviously the way people from these countries will find different things about them.

My attempt at a response post to yours and Filmi Girl's...

On the subject of Bollywood in Nigeria... apart from the NRI community of course, and some parts of northern Nigeria, Bollywood is really not big in Nigeria anymore - it was in the 60s, 70s and 80s, and most people that grew up in those decades will have very strong memories of Hindi films (I grew up in the 80s and have great memories of the Big B in 'Mard' and Manoj Kumar in 'Dus Numbri'), but its influence really dwindled after that...

Generally, people in Nigeria now tend to think of Bollywood as cheesy and outdated, preferring Hollywood and Nollywood... I think Nollywood eclipsed Bollywood in some ways. So I'm very much an oddball in these parts - usually the only black face at Hindi movies at the cinema. I only have a couple of friends that are really into Hindi films... most people are just not interested. Their perception of course is often flawed - they don't realise that there are many styles of Hindi film apart from the classic 70s masala flick, but very few people take the time (and trouble - it's hard to find the movies here) to explore....

I just had a total context WTF moment and had to jump back and share... so I just watched Magadheera (loved it) and when doing the wikipedia thing on all the actors, found out that the same yesteryears actor who showed up in a dancing cameo is the same guy who was in the "Bollywood Thriller" video and my world kind of just realigned...

I absolutely agree with this post. I do love to read how non Desi people got into Bollywood, then beyond that, Tamil or even Telugu films. It is very interesting.

Just chiming in to add the adoration of your post and this topic! I always find it interesting how non-Indians that aren't familiar with Indian culture often miss signs that a film is meant to be campy or silly or whatnot, especially at the noob stage. It kind of reminds me how I once wore this beautiful white and red sari to an Indian event, and the first thing my friend said to me was "only my grandma wears those kinds of saris." Obviously I have no cultural reference for what colors mean or even which designs and patterns are in or out of style. Same thing with films. :D I just wrote up my southie love thoughts on ma blog. :)

Oh, and I really love that pic of Sid and Illeana. :D

Oh, and LOL @ filmigirl's realization of Chiranjeevi in that Thriller ripoff- this so happeened to me too! Too funny remembering what I thought when I first saw it many moons ago...