The tale of three movies.

I've done a post before where I talked about two films both named Meera, which had in terms of story, execution or even language very little to do with each other. 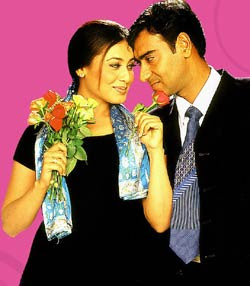 The 2003 Chori Chori was recommended to me a couple of times by people who knew I liked Rani Mukherji a lot, and I think every Rani fan loves her lively, "bubbly" roles, if not best then at the very least a lot. I wasn't very different in that respect, considering Bunty aur Babli is my favourite film with her in it next to Hum Tum. I had my doubts about enjoying the film, considering I'm no huge Ajay fan (don't hate the guy, just don't like him a ton, either), but enough people whose tastes I trust liked it and so I bought the film.

I was open to it, I really was, but it just never won me over and I kept watching it in 15 minute chunks because that's about all I could do before my attention span would end and I'd just conclude I didn't really care. I mean, Rani did a fine job, and I didn't hate her character. But I just didn't care, and I quit watching, and I tried again, and quit watching, and again, and again, but never far enough to actually get to the ending of the film.

And so the DVD still sits on my shelf, never watched all the way through, as I type this. And the weird thing? I can't pinpoint the problem. Somebody suggested it was Ajay's acting, that I just couldn't buy his side of the romantic pairing. I suppose .. but I'd hate to lay all the blame on him. 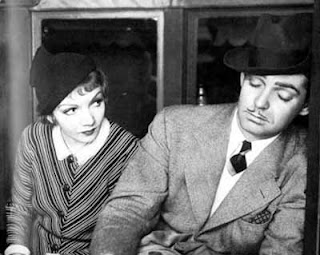 I never had any intention of watching the 50's version of Chori Chori, probably because I wasn't in general very driven to watch Raj Kapoor/Nargis films. I loved them in Shree 420, of course, but then I watched Andaz, with them and Dilip Kumar, which ended up being among the few movies I've quit watching and never gone back to.

But then one evening near Christmas they showed It Happened One Night (1934, starring Clark Gable & Claudette Colbert) on Finnish television and I loved the movie to pieces (easily one of my favourite romantic comedies of all time). Naturally I immediately went to Wikipedia and saw that it had in fact been remade in Bollywood, as the 1956 Chori Chori. 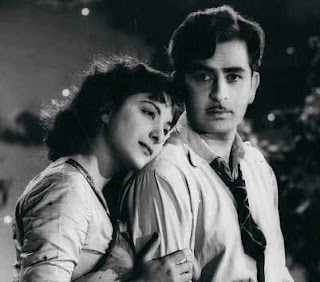 Now, it was always clear to me that ITHO was the original version and would always therefore be the best one, but I was still keen to see the Bollywood version. And this Chori Chori I definitely liked. The changes to the original story of a runaway heiress and a writer meeting on a bus journey to a big city were minimal, limited to dialogue and of course, the integration of songs and comedy characters that weren't in the original (obligatory Johnny Walker), but watching those changes was really fun for me, just having seen the original film.

While neither of the stars necessarily make my favourites category, I really enjoyed them in this film. There's a lightness to everything in the film, as there should be, but there are also a couple of very nice more emotional moments where you can tell that this a film made in Bombay, not in Los Angeles.

And what really won me over was the soundtrack. The integration of the songs can be a tad odd sometimes, relying on side characters to make sure there are enough songs, but I can be forgiving when the songs are this good.

Fun song, and cute picturization, especially towards the end.

Anyway, I don't feel comfortable comparing the two movies with one another, because of their obvious vast differences, and the fact whoever the 2003 was made for, it wasn't for me. I know it has tons of fans and everything, and I wish I could say I enjoyed it as much as they did, but I just didn't. The older Chori Chori was my favourite purely for the fact it was easy to sit through, and an overall fun watch.
posted by veracious at 7:10 PM

I'm with you on the newer 'Chori Chori'... I know many people LOVE it (I think it's Memsaab's all-time favourite film) but it just never captured my attention, and I just didn't care about the characters or think they had any real chemistry. I keep saying I'll try it again to see if I change my mind about it, but maybe it's just a case of good old-fashioned diff'rent strokes.

I own the older 'Chori Chori' but haven't seen it yet. Like you I LOVE the Gable-Colbert original. I also liked 'Dil Hai Ke Manta Nahin' (another 'It Happened One Night' Bollywood remake - there's also 'Suhana Safar', which I haven't seen yet). After reading this, I really want to see 'Chori Chori'... will have to watch it soon.

How did I miss this? It Happened One Night is my all-time favorite romantic-comedy-plot (the film as such - not so much since I had earlier pigged out on Dil Hai Ki Maanta Nahin which even translates the dialogues word for word!). I even liked Chori Chori, though I am usually very resistant to Raj Kapoor. I wonder if Bollywood will make its nth remake of IHON, and if Saif will do the hero part. If only wishes were horses...