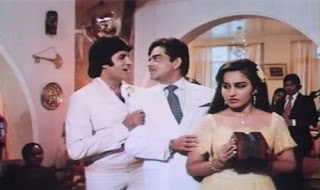 Naseeb, a 1981 Manmohan Desai masala has it all, like a typical Desai masala would - the name means destiny, and there's a heavy sense of that, familial bonds breaking and being tied back together, epic dosti, lots of messy love and villains galore. There's Amitabh Bachchan and Rishi Kapoor, Hema Malini and Shatrughan Sinha. There's funky fashion, kickassery, cool women and people falling out of windows onto two-decker busses: 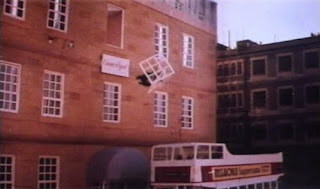 The plot goes a little something like this; Daddy'O (played by Pran, not the character's actual name but work with me here, I'm lazy) gets screwed over by his two friends (Amjad Khan, Kader Khan) and framed for murder. His friends become rich villains with evil sons, lairs and fancy stuff. Daddy'O flees the country, assumed dead or something. Amjad Khan's son Vicky (Shatrughan) is a successful businessman who is returning from London to India to meet his father and his friend Johnny (Amitabh), incidentally Daddy'O's son. The friends fall for the same girl, Asha (Hema Malini), while Vicky's childhood friend (Reena Roy) is hopelessly infatuated with him. Meanwhile, Johnny's younger bhai Sunny (Rishi Kapoor) romances Asha's younger sister, villains plot away, Amrish Puri makes an appearance.

But even though I liked the movie, and all it's zany components, I wasn't in love with it. So what gives? 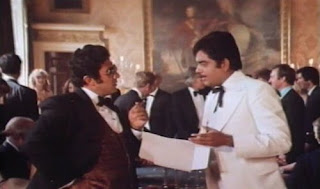 By Hercules and his tight velvet vest, I can't figure it out. Then I screencapped the movie and it hit me - the DVD just may be really crappy. The BABA DVD makes all the colours look drab, and the film appear more meandering and dull than it actually was.

Or maybe it is the period? This is early 80's, not late 70's and in Hindi films, that can actually make a world of difference. Maybe the film, as it was shot, was not as full of colour and exciting visuals, somehow darker in tone (literally, not metaphorically). 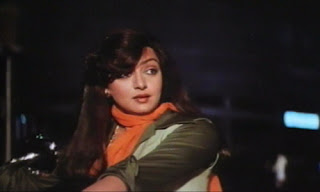 Because try as I might, I can't say there's anything particularly wrong with the film. Hema's character is pretty fun, Amitabh's is a little too Anthony throwback-like but then again, who cares? Rishi plays far too small a role but is still good and the plot has enough drama and twists in-tact. 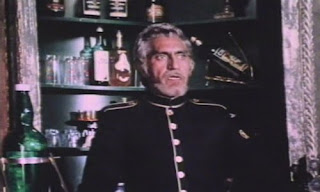 And the amount of classic villain actors in this movie is mind-boggling! Amrish Puri, Pran, Shakti Kapoor, Amjad Khan, Kader Khan, oh my. Desai loves his plentiful villains (see also: Dharam-Veer) and I love him for it! 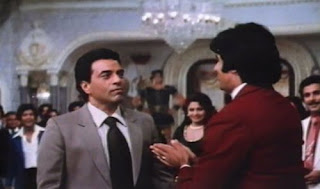 And in the first song we get the proto-type of Om Shanti Om's Deewangi Deewangi (ie. star guest appearances galore!), where Amitabh's character learns the First Rule of Dharmendra - Don't mess with Dharmendra. 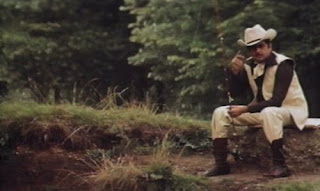 And you got fashion like Shatrughan fishing in cowboy gear (what all sophisticated Englishmen do), or .. 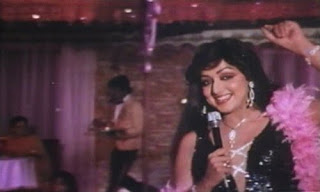 Okay, so maybe the problem doesn't lie with the fact that this movie is unexciting on the Desai Masala-meter, but rather that it just doesn't fall in line with some of my other overwhelmingly amazing Desai favourites, like Dharam-Veer or Parvarish or AAA. And it's not really so much a flaw as it is a shame - I'll rewatch this movie but mostly for the songs.

But seriously, if you can avoid it, don't buy the BABA DVD of this. It makes me sad to think the bad DVD might've affected my Desai enjoyment and I don't want that to happen to anybody else!
posted by veracious at 3:52 PM

See, this? Is why I'd (almost) rather watch some movies on YouTube than on DVD, because the manufacturers are so so crappy. Memsaab's already said it all in her brilliant rant, but I'll just add dittos to the general disaffection.

I too watched this movie recently. I bought the original DVD in India and I think it was the same BABA one. I had to adjust the settings on my TV ie colour, contrast, brightness etc to make it reasonable to watch.

Naseeb indeed is a pure masala entertainment though not in the same class as other MMD movies which you have rightly identified. Yet it is enjoyable on its own. I found Shatru's character a weak whinging one though - don't much like him anyway

Definitely agree with you on this one, it just felt empty somehow despite having some Desai traits! But I loved the prologue with soo many fimi kids that need to be taken to my orphanage! Especially the badass kid that was chewing scenery and downing a scotch too! Despite the allure of filmi kids, and a mass of baddies i just wasn't feeling it! But the highlight was Shatru kicking some ass over his destroyed birthday cake!

I may have to check this one out just for the Shotgun Is A Cowboy scene...