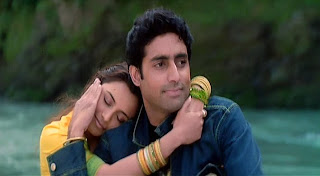 Bunty aur Babli (2005), the bombastic masala thrill about two con-artists gaining fame all around India, directed by Shaad Ali Sehgal, always takes me back to my Indian film newbie years. I saw some promo pictures for the movie and got pretty excited about it. It just looked so colourful and amazing, and I'd seen Rani Mukherjee in Hum Tum and really liked her in that. It was the first Bollywood movie I didn't just randomly come across or get recommended or anything. It was a movie I sort-of-found on my own, and got excited about seeing it. 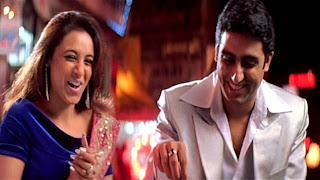 So, instead a proper review, have a series of random, spoilerous observations -- and if you haven't seen the movie, drop everything you're doing and get your hands on it. Consider this a huge recommendation. It's really so worth it. 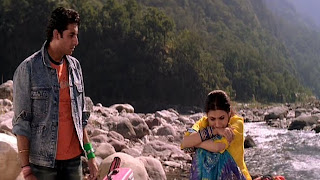 1. I adore the love story, the way their bond slowly and subtly develops. A part of why this film is so special to me is because I think I saw it at the point in time when these stars hadn't crystalized in my mind, and when I watched the movie I only saw characters. Don't get me wrong, this happens nowadays, too, with good movies particularly. But back then, I really wasn't watching Abhishek and Rani at all - I was watching Bunty and Babli, or Rakesh and Vimmi, and seeing them come together. It was just great. Despite their gentle bickering, Vimmi's tantrums and all, they gel perfectly together, and it's just all too sweet. Plus they can be surprisingly steamy together. 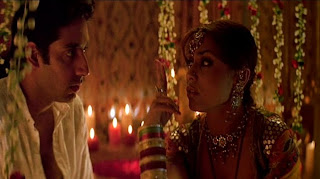 2. And there are so many awesome, cutesy coupley moments and bits that could easily go in my top 10 of anythings. Like Vimmi drunkenly explaining her past love history during their wedding night (and Rakesh coyly trying to talk her into consumating). Or their wedding ceremony, where she leads him around the fire. Or when she tells him to stop drinking and come help her check out the rooms of the hotel they just "bought" (the implication just makes me grin). And the moment before they finally get together, when Vimmi asks him, "You think you can live without me?" and Rakesh has to defiantly answer "Yes," before succumbing and admitting, "No." 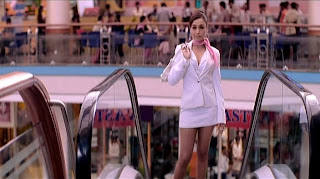 3. The cons!! The cons! Given, we don't see enough of them -- though what we do see is just so much fun, what with the costumes and everything. I especially love the Taj Mahal bit, Abhishek's whole get up, from the way he holds his cell phone to the bit where Foreigner-ji tells him, "I can't believe somebody is selling the Taj Mahal!" and he replies, "I can't believe somebody is buying!". I also liked this little consistency I noticed on this rewatch; in most of the cons, Vimmi plays the "head honcho", be it the person Q.Q.Qureishi has to impress, the lady minister selling the Taj Mahal or the foxy businesswoman buying a dozen washing machines. 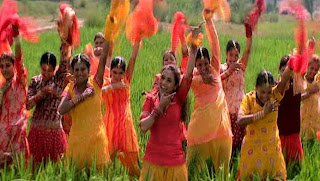 4. The soundtrack is still lively and awesome. And I noticed that S-E-L also did the background score, which you can tell on the second half, when the plot goes all 70's masala and the music accompanies that change. It's just really lovely listening. 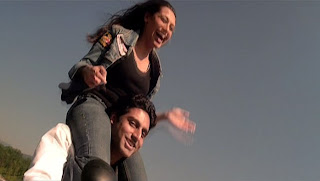 5. Speaking of that 70's style, I think while BaB could've pulled it off much better - make it snappier and less draggy at that point in the plot - it is a really splendid tribute to 70's style masala. Escaping hospitals after giving birth, gold heist, train scene like straight outta Sholay .. are wah! I dig it a lot. Especially now that I actually recognize this stuff.

6. This bit always amuses me (and is hypnotic):

And this bit is so adorable:

7. And a million other little things such as... 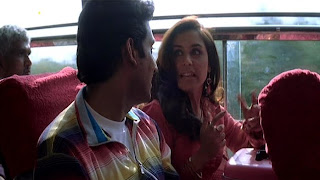 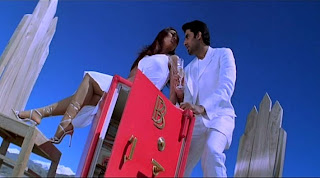 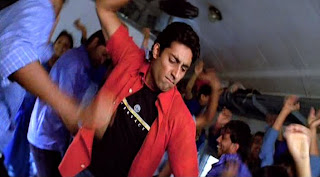 Abhishek's party department in the Dhadak dhadak picturization. Hells yeah. Nobody ever said train travel had to be boring! Just be sure to be the only guy wearing red when everybody else wears blue/purple shades. 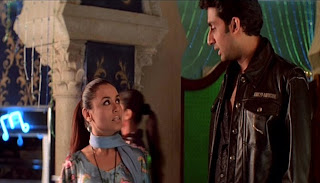 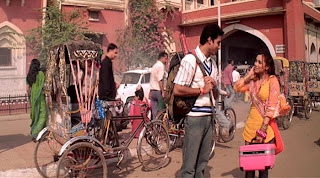 I love how young and naive and awkward they are in their initial scenes together. They really are perfect fit; both can act confident and be anything they want, but at the core they're both young, unexperienced and still learning things. 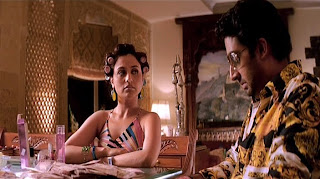 Ahhh this scene I love it. I love the constant "Are you being Bunty or Rakesh?" type of questioning and how they kind of get lost in their dual roles but can also pull away from them.

8. I'd definitely still change some things about this film, make it tighter on the second half among other things but generally? Massive, overwhelming filmipyaar. I just wish Rani and Abhishek would be in another movie together anywhere close to as satisfying a watch as this one.
posted by veracious at 12:36 AM

Awesome post.I'm so going to run home and pop this one in to rewatch.

This is also one of the first Bollywood movies that genuinely made me laugh, with all of the goofy cons. Especially the couple who buys the Taj Mahal.

Oh I think I need to rewatch this! I think I would appreciate the masala-ness a lot more now having actually seen some 70s glory.

Gah. I really, really need to see this! This combined with everyone's squeeing over how adorkable Abhishek is in his movies has me at my limit. I need it-- nooooow!

Alex - you really, really do!!! Run! Bhaago! Bunty aur Babli are waiting for you.

Love this post and all the screencaps (and the avatars too *wink, wink*).

Massive, overwhelming filmipyaar. I just wish Rani and Abhishek would be in another movie together anywhere close to as satisfying a watch as this one.

...But I get bummed thinking another Abhi/Rani pairing is probably never gonna happen. Oh, Aish, Aish....:(

Awww, I love this movie. It really is so funny and sweet. I played "Dhadak Dhadak" when I first moved to "the big city" just like Rani and Abhi's characters. Cheesy! :D

I just realized I totally ripped off your sentence in your profile about being "fangirly" and "analytical" in MY profile. Didn't mean to! Going to change it so I don't look like a copycat. :D

Ness - I'm pretty sure you would. I saw this one before I saw Sholay, after I saw Sholay I could appreciate the references so much more.

rhilex - Abhi is at his adorkable best here, trust me.

Anishok - Yeah, it's sad. Why do egoes and relationships get in the way of some great filmi couplings? Incredibly frustrating.

MinaiMinai - Hey no worries. I didn't pick up on it myself. :)

I loooove this movie! I've never really seen a Rani-Abhishek movie, though, that I didn't like. :) Love.

Katie - Yeah, there is that one film they did (Baas Itna or something like that) that supposedly isn't good but I haven't seen that yet.