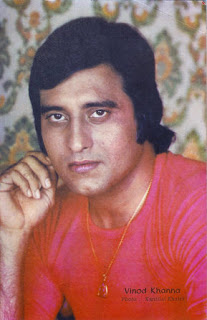 I actually am going to have some difficulty with Khanna week because I realize now I've blogged about Vinod Khanna a lot already. And while I realize nobody but me reads every post in this blog (as most of us read even our most favourite blogs somewhat selectively), I'd hate to repeat myself. There's only so many words you can use to shower appreciation onto an actor.

So instead I'm going to loan other people's words. To start off Khanna-o-Rama, I have scoured the internet (yes, ALL OF IT) to find these gems.

Call 'em testimonials, shall we? 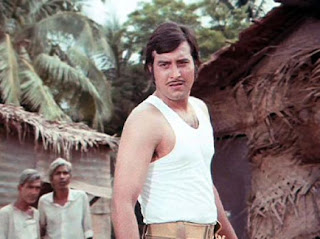 Hands down my favourite quote about Vinod Khanna, ever. How does one run like a lion? Majestically? Or on all fours?

#2 - Later, while he was pursuing his commerce studies at a college in Mumbai, the legendary Sunil Dutt offered him a role in his forthcoming Man Ka Meet. His decision to do a film invited the wrath of his father, who threatened to throw him out of the house, if he dared to enter the tinsel town. But destiny willed otherwise and he went to act in the film. The film was a success and his family too reconciled with the choice of his profession. - from santabanta

Not gonna snark this one, just thought it was interesting.

#3 - I've read that Vinod Khanna had a training in wrestling with a celebrated pehlavan, Shyamlal. So, he has not the 'sculpture' body of Steeve Reeves or Richard Harrison (and,﻿ following them, today's hunks), but it is why he is a bit 'massive' till today, like Dara Singh and his brother, because he was trained as a pahlavan, and you do not loose so easily your hard training ...
And he's gorgeous, has a great personnality and acting skills to, by the way ... :o) - from youtube

This was in response to this video. Educational! 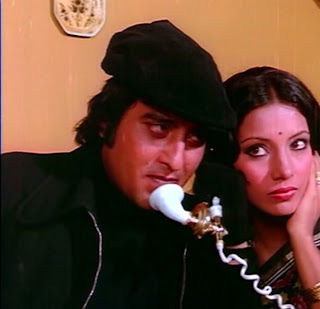 Dude, totally -- no wait, what?! He's the prince of Denmark?

(Side-note: Amusingly enough, I grabbed a lot of photos off that FB group and also noticed they have a TON of my own screencaps up there. I love it when that happens. It's a small internet!)

Must you really specify? I mean, really? 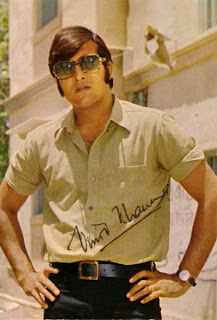 Wait, Vinod Khanna has a license to kill?! Is that ..legal? Has he been a secret agent all these years? Is he the Hamlet AND the James Bond of Bollywood? Is that ..legal?

#8: If you had spoken to the stuntmen during the days of ´Mera Gaon Mera Desh´ (1971), they would have told you how Khanna was tougher than his senior, Jat hero Dharmendra. Few people know that Vinod Khanna readily agreed to be badly beaten and bloodied in a fight scene with Dharam. But physical toughness apart, Khanna is known to have a tough mind, stubborn not prone to admitting defeat. - from PlanetBollywood

Another educational (though no doubt exaggerated) tidbit!

#9: There was a cliche in the ’80s that when you didn’t find anyone else for a role, there always was Vinod Khanna. He is not known to have let down his producers, ever. - from ScreenIndia

Um, wouldn't that mean he as the last resort? But the second line seems to suggest he was actually desired as a lead. Confusing. Also, which part of the 80's? These things matter. 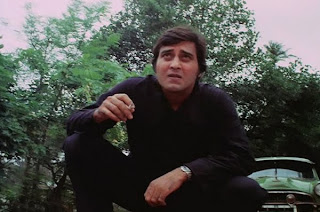 #10: The residence of film star-turned-politician Vinod Khanna at Chanakyapuri here appears to be turning into a "hot spot" for snakes. For the third time in less than a year, a snake was found inside the premises this evening. - from The Hindu

I would pay so much money to get a Bollywood Snakes on a Plane remake starring Vinod. I'm not even kidding.

posted by veracious at 8:03 AM

Thanks for the morning laugh!

#4: This is when men﻿ looked like men (Vinod, Amitabh, Dharamendra). Today's actors look like cockroaches on steroids.

This is my new insult of choice! He looks like such a cockroach on steroids, that guy! Uff! :D

The full story about the snake made my week. I was hoping that it would end up that Vinod himself climbed 80 feet up in the tree to remove the non-venomous snake.

So much awesome in one post. ALREADY! Khanna-o-rama is off to a wonderous start!

Thanks, guys - I really enjoyed searching for these tidbits, though at times it was tough. The same biography details are repeated everywhere!

The other day, I found this gem in a youtube user comment for a song from Jail Yatra: "vinod khanna was so handsome in﻿ this movie. i hope men look handsome as he is." Not as mystifying as running like a lion but so, so descriptive.

Apparently I need to start reading youtube comments... dang! I've been missing out on hilarity!

It's funny that you used comments for the internet, because that was my idea, too! I was in a Khanna mood a few months ago and wrote my Khanna post and have been saving it since then. I quoted you. And borrowed one of your pictures. (Thanks! I hope you don't mind.) It's not as clever as yours, but if you're interested, here it is: http://rosiesmovielist.blogspot.com/2010/05/vinod-khanna.html

haha This makes the perfect beginning for my Monday. Internet research should be the newest thing in entertainment. Nothing like youtube comments and random websites to brighten up a day, and they are so useful, too. Now, I dont ever need to see how a lion runs - I can just pop in a VK DVD in my player! :-)

Rosie, dont worry about it, I am more than certain neither of us stole the other ones idea. :) Thanks for the link, though!

I am the guy (under 'roxor1080') who wrote the #3 ... ^^ It was for the people who wondered why Arnold Schwarzenegger, one-time a massive guy, was slouching and showing female breasts and our Vinod Khanna, even a year older, is always looking fit. Anyway, nice to be included in your list ... and yes, 'It's a small internet!' :D