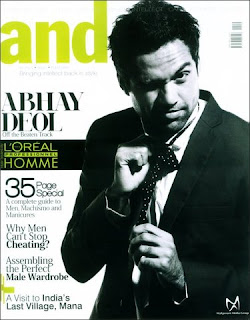 I'm typically late to the party. Not too late, I always catch the tail-end of it. But I always find myself starting the "getting ready" routine only when I know most people are on their way to the location or already there. So that's when it comes to real life parties, but in other things, too. The cool things are typically in my periphery for a long time before I'm all, "wait, that thing everybody's talking about? I just caught on and they're right, it's awesome!". Of course, there are the exceptions, but let's ignore those, for the sake of a neat metaphor, shall we?

So Abhay Deol was one of those hip things I saw other people get into and sort of gush about and I was just like, "Oh, some guy Shweta is really into? I could investigate this but I have dishes to do."

But then I caught on enough to watch Honeymoon Travels Pvt Ltd (discussed here) and thought, yeah, okay, I kind of see it now. But you know, that movie had so many people, I didn't feel like I'd fully looked into this whole thing (I could call it a phenomenon but it's not like Abhay fangirlism is sweeping the nation? or is it? it should!).

That is, until, this week I watched four Abhay Deol movies. Studies? Life? Who cares! If my teachers ask, I'll tell them, I am a Dharmendra nepotist. If his nephew is doing movies, then dammit I am going to watch those movies. If my teachers ask, "Who is Dharmendra?", I'll tell them, "Tera baap!" ["Your dad!", only it sounds cooler in Hindi, naturally]. 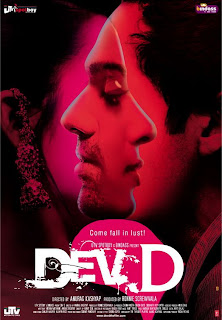 Dev.D (2009) I must preface with the following disclaimer; I haven't seen the previous Hindi film adaptations of the story but I know the story of Devdas itself. Anurag Kashyap's take has been praised for taking the old story to a brand new level, and indeed the film is awesome to watch. It flows smoothly, the visuals are great, the music is integrated seamlessly and all acting is top-notch; Abhay plays the lead role with just the right panache in the beginning and later, wrecklessness that spirals more and more out of control. Mahi Gill as Paro is a total find, and even though I didn't love Kalki Koechlin as Chanda, I thought she did a good job. The women are not helpless, and totally unapologetic about their sexuality; this was a great, rare feat in Hindi films.

I guess the only real flaw, if you can call it that, is the fact that the ending didn't make me a fan of the film. I never had a problem with the story of Devdas, my disinterest towards the other filmed adaptations came mainly from the fact I didn't like the director (Sanjay Leela Bhansali) or wasn't too interested in the main star (with the case of Dilip Kumar's Devdas). So I wasn't dying to see the story spun into something radically different. Some were, and those people loved this movie, and I can see why they would. But personally? It was like, not love, between me and the film. 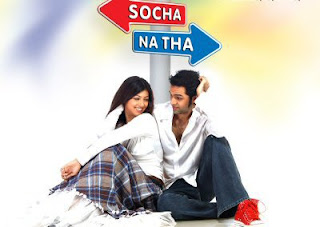 Socha Na Tha (2004) was the first film by the now well-known Imtiaz Ali, and also Abhay's debut as I understand it. It's a fresh little love story, about Viren (Abhay) and Aditi (Ayesha Takia being adorable), who get matched for matrimony by their parents but decline the offer. As they meet, however, they discover they find it very easy to talk to one another and as the relationship between their families grows sour, they themselves become friends and naturally, then some more. The film is a little dated in terms of the overblown family affairs messiness, but the love story itself is very cute and well-written, with sharp dialogue. Ayesha Takia is just fantastic in this, and perfect counterpoint to Abhay's slightly clueless Viren.

The subtitles began lagging on the last third, which diminished a lot of my enjoyment of the film, but there's one particular scene where the couple has some incredible bickering that left me feeling great about the movie. Imtiaz Ali sure has a handle on dialogue; just like in JWM, the conversations between the two leads seemed natural, yet witty, funny and perfectly adorable. 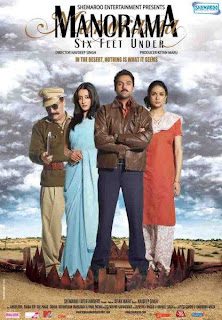 Manorama Six Feet Under (2007) is a thriller directed by Navdeep Singh, telling the story of Satyaveer (Abhay) who abandoned his dreams of being a novelist after his first novel, Manorama, sold very few copies. He lives a dull existence in a desert town called Lakhot with his wife Nimi (Gul Panag), until a woman named Manorama comes to his door, and hires him as a private detective like the main character in his novel. This involves Satyaveer with a web of lies, cover-ups and murder.

I wouldn't call this film badly scripted in general, but sadly something just made the whole thing drag and feel dull like tumbleweeds somewhere in the middle. It starts off nicely, and picks up pace considerably once the pieces of the puzzle begin to form, but the middle part almost made me turn the movie off. Thankfully I stuck with it, and once again loved Raima Sen, who plays Manorama's flatmate Sheetal and Vinay Pathak, the policewallah who is also Satyaveer's brother-in-law. Gul Panag who shone in Dor is very effective here, and there's a brilliant chemistry between her and Abhay in this; it feels very ordinary but at the same time has those signs that despite the mundaness of the relationship, these two people do love each other deeply. Abhay is great, too. You can tell the character is filling a hole in his existence, by getting involved with something he knows he probably shouldn't, and even when he encounters setbacks, he's not likely to give up.

I liked it, especially for the acting, and the film noir likeliness, but the story really could've been tighter. 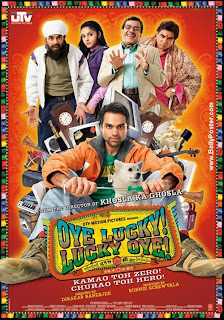 My favourite out of the Abhay Deol films I've seen thus far, though? Oye Lucky! Lucky Oye! (2008) without a doubt. A black comedy about Lucky, a thief extraordinaire, whose greatest talent is his wit and his acting, the way he smoothly talks people out of their possessions, and gets away with it with the greatest of ease. It's just an incredibly well written, fun ride, that constantly had me chuckling. The cast of characters also includes Paresh Rawal in three roles (and Paresh Rawal, being the comic genius that he is, fantastically gives each character their own flair, so much so I almost forget he is playing all of them), Manu Rishi as Lucky's hapless sidekick (and apparently also the film's dialogue writer!) and Neetu Chandra as Sonal, Lucky's girlfriend. The acting was all around great, but naturally the film belongs to Abhay's comfortable demeanor, though I can't not mention Manjot Singh, who plays young Lucky with the vibrant humor that the older version of the character definitely downplays.

This film was really so ace that I am using the word 'ace' and finding it difficult to actually name something I didn't totally love. It's not too lengthy so the pace felt comfortable and it's jam-packed with moments I feel I need to rewatch to appreciate properly, some big ones (like when a cop wants to know who is Sunny) and some smaller ones (like the little conversation between Sonal and Lucky's older brother's wife, probably the only one between two women, but so thick with things unsaid it caught my attention). And like a cherry on top, there's a reference to Vinod Khanna. Film, you had my heart, right there and then.

It's a definite favourite for me. I love it when Hindi cinema does black comedy, especially when it's this damn good. 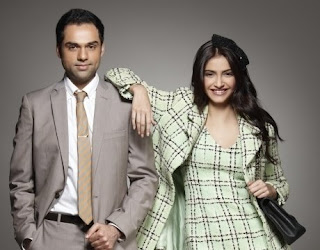 And now? Now I just eagerly await Aisha (however they choose to spell that title), with Abhay and Sonam Kapoor who look adorable in this first look. Apparently the film is a loose adaptation of Jane Austen's Emma, which is not my favourite Austen because I find Emma quite an annoying character throughout most of the story, but I really like Sonam and she's no eyesore, and Austen adaptations are always fun so .. yay!

And to those who are still late to the Abhay party? Consider this post your e-vite. A lot of us are already here and having a blast. The bar is serving Dimple cocktails but they are running out of Malibu so come on, hurry, hurry, hurry!

I'll be waiting for you. Come say hi when you get here!
posted by veracious at 1:34 PM

That was some Abhay party! I have yet to see Socha Na Tha, but of the rest, my favorite is Manorama Six Feet Under. Its so noir and yet fits Rajasthan and the regional mileu there so well. Plus of course, the acting was superb.

I lurrrrve Socha Na tha. Similarly, each of the Abhay Movie, I love them without any doubt. An actor to watch out for, in any movie.

Abhay's the man! Basra shooting hasn't even begun, but I am already quite ready to stand in line for it already. I think I've seen each of his films at least thrice... yikes. gotta get this obsession under control :)

Bollyviewer - Socha Na Tha does feel a tad dated (the fashion can be cringeworthy!) but it's a fun film otherwise. And yes, the milieu of MSFU was awesomely portrayed.

Darshit - Too true. He has great picks!

Shweta - I don't blame you in the least. The way I see it, you began the party and I owe you a drink for doing that! :D

I, too, adore Abhay. I first saw him in Manorama, which I LOVED. (I was equally blown away by Gul Panag-- to the point where I looked for her in Dor-- which introduced me to the Star Sent From Heaven AKA Shreyas Talpade...ahhhh, BW just gives and gives and gives... but I seem to be far far off topic now)
I liked Oye Lucky, but not as much as you! I may have to give it a re-watch. There's certainly no harm in staring at Abhay...

prahajess - I'm not sure whether it was something with my mood that made it hard to focus on the plot during the middle part of the film. But it was a good film regardless of that.

And you're so right about BW just giving and giving. Some people are the type to not really pick up new favourites or have very few favourites but I'm pretty easy to please, I guess, because there's so many people I like and thus all the "to see" lists get a bit out of control. :D

OLLO was just so my thing. Love love love black comedy and it was hilarious and I love con type plots as well so yeah, I really enjoyed it. :)

veracious - welcome to the club ;-)

It's a great club to be a part of.

Hey guess you are just missing one Abhay Deol movie - Ek Challis ki last local..watch it and let us know your thots about it..I think it was a brave choice for AD.

I am also a huge AD fan..Loved OLLO and DevD..

Silent Melody - I watched Ek Chalis Ki Last Local recently as well! But I'll post the review of it and another Abhay film I watched (Ahista Ahista) after 70's week. So check back on Monday for a review.

I can say I agree with you it was a brave choice and I did rather like the film. Pretty funny black comedy! Props for Abhay, he just doesn't make bad movies.

Here you can sell and buy both new and used products.
This website is perfect for selling just about anything at all.
More at free online classified ad