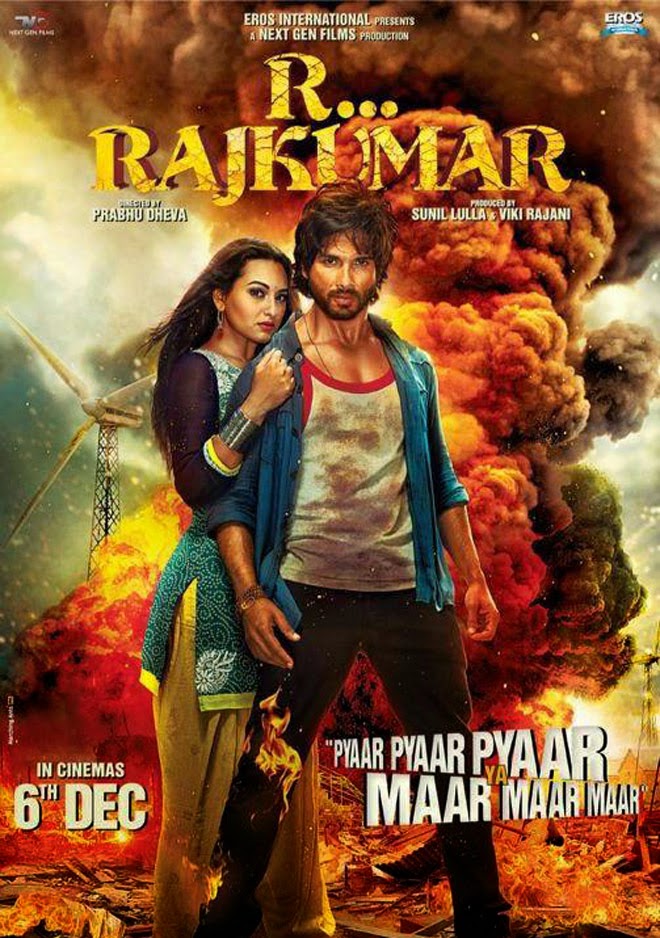 Prabhudeva began his directorial career with the spry revitalisation of the Maine Pyar Kiya plot in the Telugu favourite Nuvvostenante Nenoddantana, and continued his directorial exploits in the South, before smashing onto the Hindi scene with Wanted, a Southie remake, but a badass one at that. I was a fan from the get-go, liking his visual, bombastic masala style, alongside the amazing choreography that his films always seemed to have. To pair him up with Shahid Kapoor, an excellent leg shaker in his own right, and add a bit of roughness to him in the action masala format - this all seemed like the recipe of a great movie.

R.. Rajkumar has a story that is almost so forgettable that I've actually forgotten the details, aside from the barebones plot structure - Shahid plays a hoodlum who joins forces with gratuitously shirtless villain Sonu Sood, mostly for monetary reasons. Things get tricky when Sonu Sood takes an interest in the daughter of the corrupt politician he's in cahoots with, who just happens to be the same girl (played by hapless, why-am-I-stuck-in-these-roles Sonakshi Sinha) Shahid's character has been relentlessly harassing for most of the movie. What's going to happen? Spoilers: the poster kind of says it all.

I suppose I should really thank the movie for spinning such a simplistic tale, as it made it very easy to follow with my beginner's Hindi skills in the cool southern Mumbai multiplex I saw this film at. Sonu Sood was great as ever, and the songs were the soundtrack to the rest of my trip, but the positives kind of run out there. What bothered me the most was the absolutely relentless, inexcusable sexual harassment by the main character, portrayed as romantic. You could say this has become an Indian film trope, and especially following the movement to make India safer for women, this trope has been called out - films may just be films, but the women on India's streets who suffer sexual harassment every day of their lives do know the effect that portraying this trope as romantic has on society. It's been a while since I've seen such a blatant example of "eve-teasing" disguised as a romantic subplot. There isn't even the slightest hint of Sonakshi's Chanda liking the main character, and he invades her personal space, doesn't take "no" for an answer, and it's just so, so off-putting.

It's also just completely unnecessary. Why can't she like this guy from the get go? Why can't they have meet-cute and then begin a bickering chemistry, which would largely serve the same function, but take away the icky issues with consent (she said no, so back off, buddy)? You could still have the songs, the arguments, even the slap scene that seems so pivotal, going by the times it's referenced back to.

I hate to turn my back on a guy I once listed as one of my top five directors, alongside such favourites as Manmohan Desai and Shankar, but I'm afraid it's come to this. I barely remember watching Rowdy Rathore, even though I know I did. This one didn't fare much better, though I still enjoy the soundtrack (and Ghandi baat is a song that will always be on my "India trip" playlist). If he insists on spicing his original films with these sorts of off-putting, regressive tropes, I'm just not interested - I like my action masala, but I also like a modicum of respect from the hero towards the heroine. This isn't a tall ask. It really isn't.
posted by veracious at 10:49 AM

I am bummed to hear about how one-sided the romance is in this-Shahid/Sona seemed like a pretty workable jodi to judge by the previews, and something I respected about Wanted, NVND, Engeyum Kadhal (Prabhudheva's otherwise mediocre remake of Love in the Afternoon), and Rowdy Rathore was that he went to some pains to set up the idea that yes, the woman was just as into the guy as he was into her. (And even Rowdy Rathore held off on the stalkertastic parts until after the heroine had given some mixed signals of a "yes, I'm sort of interested, no I'm not going to be too overt about it" variety, rather than just having him chase her around after a flat no.)

I'm tempted to blame some of the stupidity on his producers on this one, but since IIRC it's the same set of people who are backing his movie with Ajay Devgn, I guess I shouldn't be too optimistic about that one either.

It was puzzling, but at the same time I do wonder whether something was lost in translation. My Hindi skills are good when it comes to parsing film dialogue, unless characters speak in poetic Urdu, but yeah, what I got from the dialogues and the mannerisms of everybody, it just seemed really uncomfortable.

I had a discussion on Twitter that Prabhudeva usually does better work when he doesn't write his own films or come up with the stories for them. He's made a niche for himself but ..I wish the films he's written so far were better. I used to be such a fan, gah.