Arundhati - a woman and her dagger. 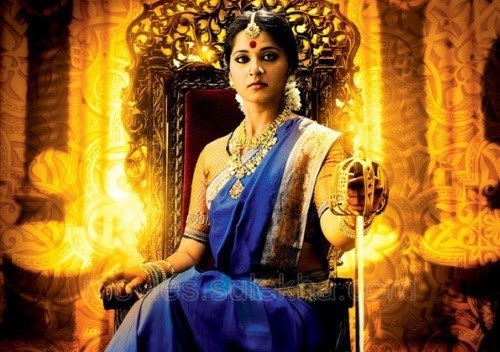 It is so rare to see an actress at the centre of a Telugu masala film, that when I spotted the Malayalam dubbed DVD of Arundhati, a 2009 Telugu supernatural thriller, I knew instantly that I had to buy it. The cast also intrigued me - Anushka Shetty, who is typically a solid performer, was at the helm and Sonu Sood, my favourite scumbag in both North and South Indian cinemas, played the horrifying villain she has to conquer. The plot tells of a woman being reborn in modern day to conquer the evil that once plagued her court.

I didn't have subtitles for this movie, so all of its subtleties, or lack thereof, escaped my understanding. What I could gather was the gist of the plot and the performances, which are all solid. The CGI was probably never amazing to begin with, so it looks a bit dated now, but serves its purpose, as this tale of black magic and all kinds of sorcery wouldn't really be told without the help of computer-generated special effects. 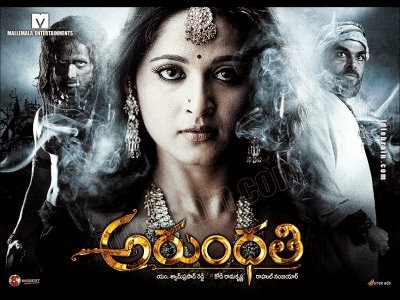 I wish I had had subtitles, though, because I feel like regardless of quality, this film would've been more interesting. What I gather is that it's an okay film, not a spectacularly good one - it has all the tropes of this type of film, from the revenge angle to the ludicrous horrifying lengths Sonu Sood's villain reaches. It's not quite Magadheera levels of fun, partly because it's so serious and has almost nothing in it to truly lighten the mood (even the songs never really make it fun). Some scenes are almost too dark, lending it a bit of a horror film feel, which may be entirely intentional. There is also one film shamelessly copied from a well-known Chinese film from the early 2000s.

It is so rare to see a female-lead film in this manner, though. There is no hero here - Anushka's two characters are the focus, and even though she gets some help from men, there isn't a single moment where it looks like the focus might shift towards somebody else. It's refreshing, but at the same time it's not as revolutionary as one might hope. There is no part in which the traditional gender roles are necessarily questioned - the heroine is given agency but she's kind of portrayed as the exception, not the rule. A devil's advocate might ask whether that's so different from how heroes are portrayed, too, though, and I suppose that's true.

Perhaps more telling is the fact that even if this was a pretty decent hit in the box office, I've not really seen it mentioned much. I suppose that could just be a sign of its reputation, because like I said, even without subtitles, I didn't get the sense I was missing out on nuanced storytelling, or even intriguing supernatural world-building. As it stands, I might recommend it to those who like the leads and don't mind dated-looking CGI combined with stern supernatural stories.
posted by veracious at 10:17 AM