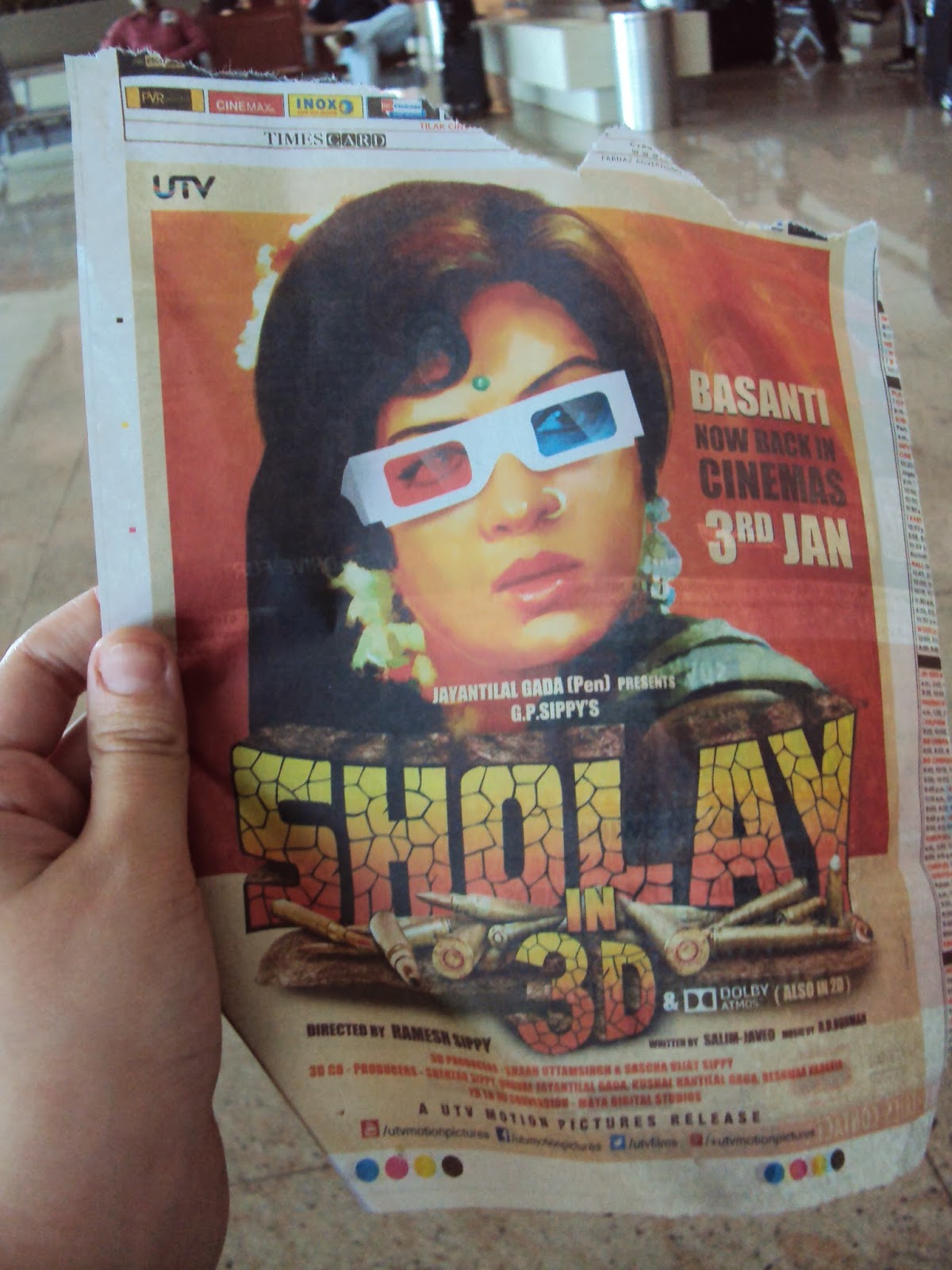 As luck would have it, on the last leg of my trip to India, I'd fall ill. Illness when traveling is an absolute curse - I was too nauseous to eat, to shop, to even move, and so I spent the last days of my time in India, in the gorgeous and interesting city of Madurai, cooped up in the hotel room, watching Koffee with Karan episodes and reading bad Indian English fiction (I'll have a post later on about the books I read in India).

A blessing in disguise was my 12 hour layover in the city of Mumbai. I hadn't seen a film in what felt like ages, since I hadn't really found any theaters during my time in Madurai, and thus I hadn't had the chance to catch Sholay's re-release in 3D. I'd read a bit about the legal weirdness surrounding the release, but in many ways I didn't really care - this was such an amazing opportunity to watch a favourite film of mine in a whole new way, I couldn't pass it up.

So thanks to the help of an Indian friend with google fu and a patient taxi driver, I got to watch Sholay 3D at a comfortable multiplex in Juhu, Mumbai, in a surprisingly filled theater, considering it was an early Wednesday evening. And if my hasty movie snack of samosas and Pepsi wasn't good enough to begin with, this was an absolutely joyous film experience in every way.

The 3D release had added those gimmicky bits of things flying at the camera that send a jolt of surprise through each audience member. It was a funny collective experience. When Thakur shoots the cuffs off Jai and Veeru, the audience collectively gasped, then chuckled at our reactions. Silly 3D gimmicks, we knew the bullet wouldn't really fly at us. And yet, for a short moment, we did.

The picture looked crisp, but as ever, the real triumph of the film was not the picture quality, or even the sound mix (which had some things added, some things sharpened, but also made the soundtrack sound strange, almost like the vocals had been undercut in some way), but the story, the performances and the dialogues. The guys next to me were quoting lines about 5 seconds before spoken by the characters on the screen - at times, they'd misquote, and tut at themselves, when the line they thought they remembered was not precisely as they'd remembered it.

What I enjoyed perhaps most was the comedy, because Sholay is a very funny film, almost from top to bottom. From Asrani's goofy jailer, to Veeru's drunken antics, to the legendary scene between Jai and Mausi (one of Amitabh's best, understated comedic moments), I was laughing alongside the rest of the audience. Basanti also floored people, with her haan haan, maine kab mana kiya's. I speak of course as a huge fan of the movie, starting from the first time I ever saw it, but with this watch, there is no doubt in my mind why it's also such a classic movie - people love it to bits. They revel in every moment of the stupendously long running time. And to get to see this movie with such an appreciative audience, in such a crisp form - well, I can't say I've ever had such a memorable film experience. I was smiling throughout my arduous airport experience that came after the movie, simply remembering what an excellent experience I'd had.

And truly, what more could you possibly want out of a movie?

(Sidenote: in Chennai, I found coasters with Sholay quotes on them, but didn't buy them. "Yeh coffee mujhse dede Thakur!" still makes me chuckle, though.)
posted by veracious at 12:41 PM

Yay! You're back. :) I have to say, Sholay with an Indian audience is the one part of your adventure I really envy. It was not a film I fell "in love with" the way the audiences did back in the day or the way people do with DDLJ, but I found it compelling and could see why it had such a profound impact.

I had beyond good luck on this trip, I have to say. Sholay, with a Mumbai audience, and the experience made new by the 3D gimmick, even though I had a few issues with the soundmix and all. Still, amazing. Are wah :D

I don't know if the 3D is getting an international release, would be amazing if it did.