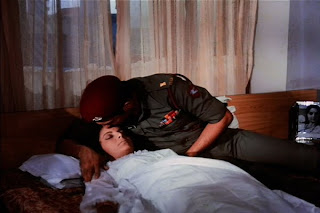 The first time I watched Achanak (Suddenly), the 1973 Gulzar film, I didn't completely take in the story of the movie. I mean, I saw all the elements and the messages, both implied and outright stated, but I never processed them properly, never thought through them and what the film is truly trying to say.

Achanak tells of Ranjeet Khanna (Vinod Khanna), a man miraculously fighting for his life at a hospital, after being hit in the chest by a bullet. Two doctors (Asrani and Om Shivpuri) and a nurse (Farida Jalal) maintain his life through slim chances of survival, and Ranjeet lives through the procedures. The film works with a non-linear narrative, and little by little we learn how he got to this point, and are introduced to the central paradoxes of the film. Ranjeet, a celebrated soldier, is on death row for killing two people. A man who was awarded for killing tens is being killed for murdering two, and on the other side, doctors fighting to keep alive a man about to be killed by the state anyway. 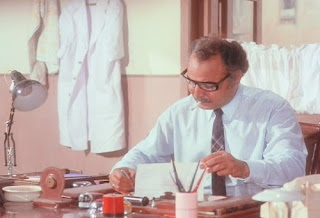 The doctor may smoke like a chimney, but it's in his words that we find these paradoxes stated outright. The thing is, this is not a particularly subtle film - but nor is it painfully loud in getting its messages through. It's not a brilliant film, but it is solid, and with its 96 minute run, it's a much more compact watch than many other films of this decade. 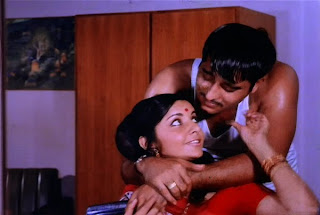 Achanak is without a doubt worth watching for fans of Vinod Khanna because it is essentially all about his character; this morally grey soldier, who has quite a simple, humorous, loving side but is also, at the core, a soldier. This sort of parallel personality is probably the most interesting aspect of the movie, and it doesn't hurt that Vinod acts great, looks great, and his character is pretty much in constant agony, whether physical, emotional or both. 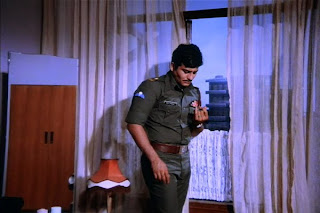 So yes, I most definitely recommend it on that part. And it's a short, interestingly composed film (in terms of editing) and it's a Gulzar film, which usually only means good things. 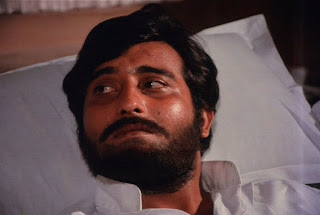 But this is where this review gets a bit essay-like, and I get into detailed spoilers, or rather processing what this film is trying to say about its themes, and how I understood everything. So look away if you don't want to be spoiled. Even if you read on, you probably won't get much out of it unless you have seen this film.

As I said earlier, the movie argues that Ranjeet being a soldier essentially makes him a trained killer. And the sort of hypocrisy involved in labelling one sort of killing okay but not the other one. But of course, the movie never really seems to get into the real problem of Ranjeet being a soldier - not the fact he has all these skills on how to kill a person effectively, but rather the fact that he uses these skills on people dear to him rather than going about it like a normal person. The argument, as I see it, is that the army has caused him to think like this, even though on the outside he is a very regular, charming man.

There is also never any questioning of the general role of army - what values are they fighting for, and who against? Maybe this was a choice to keep things on a general level, not refer to any real-life conflicts with real life enemies. But then, even without talking about real life wars, you can talk about justifications of war, defence or offence etc. And we are also never given much insight into how army has shaped other soldiers, like Ranjeet's father-in-law who is also a colonel. What we do see is that despite his actions, he doesn't find Ranjeet a bad human being - he understands and wants Ranjeet to survive. So perhaps this is also a part of the message that army has shaped him in terms of not just providing him with the skills to kill but also made that the only way he knows how to operate, even though he doesn't otherwise show signs of being emotionally stunted. The film may be anti-militarist, but in a rather strange manner.

What is really fascinating to me is the fact that the one suffering a crisis of faith at the end of the film is not the colonel but the doctor, asking his co-workers, why they must keep doing this, saving people only for them to be killed again by the state. I mean surely it's not difficult to justify, saving somebody's life, no matter what the circumstances. But the final line in the movie, translated in the subtitles as, "They'll keep doing their operations, and we'll keep doing ours.", makes me think maybe the doctor has the crisis because censorship or something else prevented Gulzar from making the army be the one with the breakdown. The law or the state doesn't realize the contradictions the doctor realizes and outright states in the film. So killing on the battle fields will be continued to be celebrated, killing somebody not in an enemy uniform will be punished, and killing as a part of a conviction is justified.

The film could have some pretty interesting things to say about the death penalty, but it never really goes there, instead focusing on highlighting the way that Ranjeet's army training has made him a killer.

It's all very thought-provoking and sort of brought out obviously enough for people to hang onto these messages as they're watching the movie, but in a way those messages are still quite puzzling and make me feel like I'm missing some sort of context to plop this movie onto in order for it to make perfect sense.

Still, it's a solid film with oh so much Vinod Khanna goodness, I am hardly complaining.
posted by veracious at 12:56 AM

I looked away at the spoiler warning because, sigh, this is yet another film that looks like worthwhile viewing. Will definitely come back and read the rest after watching - it looks really interesting!

Hmm... I would find the central premise a lot more interesting if it werent for the fact that Vinod's character kills an unfaithful wife and her lover. Sadly, a woman's adultery (proved or alleged) is used as a justifiable reason for homicide a lot more often than I like, in real life. So, the very thought of a film that presents a wife-killer in a sympathetic light, just doesnt sit well with me. But its Gulzar... AND Vinod Khanna - which practically guarantees that I will see this film at some point!

Hmmm indeed! I am very intrigued! I'm 1 for 2 on Gulzar films but this does sound so very very interesting. I suspect like Bollyviewer I would blow a fuse at the unfaithful women being killed but I love the idea of unspoken critique (or potential for, I guess) of the military (and the sort of unthinking and/or rigid patriotism it might represent)!

Ness - It is fangirl fodder, I'm sure you'll appreciate it on that level on the very least.

Beth & bollyviewer - Yeah, I am not a huge fan of the plot and I wish the movie explored why he made such a drastic decision instead of, I dont know, a little thing called divorce (or condemned it a bit more). It does explain it, kind of, but of course not in the sort of way you'd imagine if the film was made today.

I think I am still processing it, because while I am not a fan of the plot or the films messages, they also don't bring up any extreme ire in me.

I just saw the movie, while I was taken by the lovable side of Rajesh Khanna, also Surprised that his commander was also his father-in-law,
I tend to agree with Bollyviewer and Beth that why kill ? Yes, there is a rage that can answer that but why not just throw them out of his life.
The story never really explains or justify as to why his wife cheated ? They show such a loving relationship between the two, so all that was sham ? If the reason was just to show the point that doctors save lives no matter what and the law gives death penalty to prove what ?
Let's show that regardless of living, you will be punished for what you did. There are a whole lot of criminals running around because of holes in the law system but not in this case. Vinod Khanna impressed, he delivered, the movie as a whole failed to impress.