Poll time! Which film should I review bilingually? 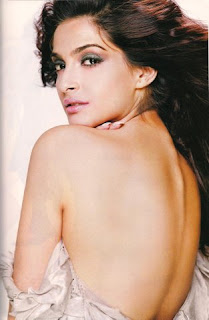 I'm going to let this pretty picture of Sonam Kapoor entice you all to vote in this poll (which I hope works - first time I'm using PollDaddy).

For a while now I've been thinking about doing a multilingual review because I sometimes wonder how it affects my Finnish that I'm constantly reviewing movies in English but rarely discuss them at length in Finnish. I could throw in reviews in other languages which I sort of know but am not fluent in (like Swedish, German) but I figured I'd better stick to the languages I really know. The idea is to write in Finnish and then do an accurate, close English translation.

This is more of a personal exercise in vanity but I'd figured I'd test out this poll thingy and also let you affect what you see in this space a bit. So go vote!

Poll ends on Feb 1st. Results are secret 'til then, to maintain the surprise. ;D
posted by veracious at 5:04 PM

Choice was easy ;) I don't think I can reveal my pick, but movie with him is always woth to watch ;) And he has no abs, he's alive and young and that's not a old movie :D

Please do the review in Swedish. because my Finnish really sucks. I can count til three, so unless there is a rating system using one two or three, I will be lost.
Yes I know you'll do it in Angrezi as well. Men svenska er bedre. Det er det nånting en dansker och en finne har tilsammans.

Vinod Khanna, for sure! And Inkaar is a really entertaining thriller, too.

LOL to Sonam's pic. Indeed, it made me come here to vote :P

I was a traitor to my southie self and voted for the dutt/madhubala flick. I've been enamoured of old black and white film stars of late and would love to see screencaps! :)