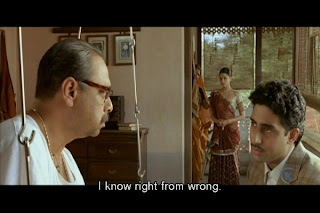 The first time I saw Mani Ratnam's Guru, I was put off by the idolization the main character receives in the movie. He's a businessman making profit any means necessary, disregarding laws and regulations, and yet this corruptness is being redeemed. Some people shared my problem; others were fine with the message, and it seemed, so was the Indian public, whose consensus is usually shown at the box office. People on Bollywhat's discussion of the film pointed out how this really is admirable to the Indian people - knowing how bureaucracy and other regulations limit a person's possibilities to succeed and make money, Guru's ingenuity is not condemnable but admirable. These sort of opinions opened by my eyes to look at the film a little differently. Still, I remained unimpressed.

I liked the songs, though, so I bought the DVD and just today, after over a year, sat down to rewatch it.

Unsurprisingly the story failed to engage me to watch the film all the way through. I guess it's just simply not Mani's best, though I certainly like some things about it. Abhishek's performance is undoubtedly a strong one, and the songs are lovely. 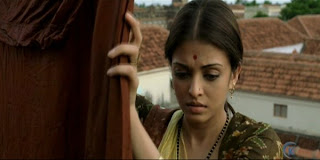 Aishwarya is rarely this lively and convincing in a role, which I guess just proves she needs a good director to pull a performance out of her. The love story within the film is down to earth and portrays two people who love and support one another, simple as that. 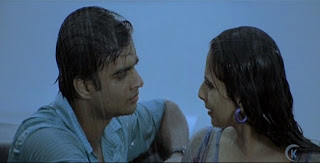 But even with those factors, my favourite thing about the film is hands down the graituitous love story line between Vidya Balan's and Madhavan's characters. It's not crucial to the plot in any way - Vidya's character, the disabled Meenu, doesn't really exist for any other reason than to give Guru more human, sympathetic flavor (as she and him are friends throughout the years). Madhavan's Shyam Saxena is a young journalist looking to reveal Guru's business frauds to the great public and therefore an important character, but there's no real reason why he ends up developing a bond to Meenu.

And yet, there it is. An utterly perfect, swoonworthy little tale of romance amidst this otherwise pretty straight-forward dramatic biopic. It's in touch with realities, too, of course, but still rather sweetly so.

What about the moral message, then? To be honest, I don't know. It is what it is, I guess. If the system is rotten, should we obey the system's rules? On the other hand, neither the film or its hero is looking for things to change - as things are, so they will be, and the thing to do is to try to make the best of it. Even if that means going against the rules.

I just know this; despite the film's credits, it's far from being one of my favourites. Maybe the story of an Indian entrepeneur isn't something to interest me despite impressive cast & crew. Perhaps it's just something lacking in the script or the way the story develops.

And here's another thought that occurred to me while watching: maybe we just expect too much from Mani Ratnam these days. It seems like he's the resident Good Director around, and any project with him usually gets most Hindi film fans salivating at the promise of another great Mani Ratnam film. And while the man has undoubtedly been responsible for a lot of really good films in the past, I suppose it doesn't really help when everybody's expecting a new Dil Se or a new Iruvar at the least. Next time, let's remind ourselves of Guru and Yuva before seeing Mani-ji's next venture, okay? (I know I will.)
posted by veracious at 10:01 PM

"He's a businessman making profit any means necessary, disregarding laws and regulations, and yet this corruptness is being redeemed."

This is actually a fictionalised account of the rise of one of India's biggest corporate giants - Reliance Industries - and its founder Dhirubhai Ambani. The reality of his rise to power is a lot worse than the movie portrays! Even though the movie tends to excuse his corrupt dealings and legal shennanigans, it doesnt try to portray him as honest, which I found refreshing. And yes, the Madhavan-Vidya romance was really really good. :-)