I got a sudden urge last night to rewatch Andaz apna apna (1994), one of my absolute favourite Bollywood comedies, and one of my absolute favourite films altogether. I initially discovered the Aamir Khan-Salman Khan starrer quite early on in my Hindi film watching career. I laughed so hard my muscles cramped, and was so in love with the film I actually saw it three times during the next two days. I invited a friend over to watch it; she also loved it and we concluded this was without a doubt one of the most memorable Hindi films we would ever see.

Not surprisingly, even with this rewatch, I laughed as hard as ever. To the same jokes, same lines, but still discovering new things - as over-the-top as both Aamir and Salman's antics are, every once in a while I watch one in a scene where I normally follow the other, and the expressions, the reactions just kill me and make me fall off my seat.

The movie, in case you've managed to miss it, is a simple story of two good-for-nothing guys - our beloved Khans, of course - and their attempts to court a rich girl (played by the underappreciated comedienne, Raveena Tandon). There is a villain (Paresh Rawal), naturally, a second female lead (Karisma Kapoor) and all the other Hindi filmi usuals; henchmen, double roles, mistaken identity.. What make AAA worthy of a watch (or in my case, seven) are two things. First, its genre. AAA is 100% slapstick. It's goofy, it's silly, it's loudly comedic and unapologetic about it. Second, its self-awareness. It references not only specific movies (Sholay, Hum aapke hai kaun, Qayamat se qayamat tak, Seeta aur geeta, to name a few) but Hindi cinema in itself. It laughs, it mocks, it parodies.

In what is probably my favourite song in the film, "Dil karta hai", Aamir's character Amar chases Raveena around here and there, does the stupidest dance moves (so 90's .. so Aamir!) and is generally annoying. The great thing to me about this song is basically that it's unintentionally (intentionally?) very parodic. How many times is there a song in a Hindi film where the hero acts like an insufferable git and the heroine would be happy if a rock fell out of the sky and landed on him? Raveena's annoyed expressions are simply hilarious and Aamir's moves are an artform in their own right. And the best part? Eventually she hits him with a log of wood.

This delicious self-awareness is what AAA and the other movie I want to discuss in this post, Om shanti om (2007), have in common. 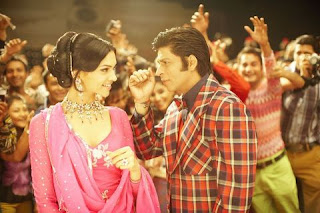 OSO is Farah Khan's crazy and colorful tribute to everything in Hindi cinema; its stars, its films, its makers and its clichés. The film begins in the 1970's, where a junior artist (ie. an extra) Om (Shahrukh Khan, who else!) admires the superstar Shantipriya (Deepika Padukone). The latter half of the film takes place in the present glitzy 00's Bollywood. I feel silly repeating any more of the plot synopsis - this film is getting talked about just about everywhere so if you've somehow managed to miss what it's about, you must be hiding your head in Bollywoodless sand.

The film, much like AAA, is very loud with its references and humor. It's also unapologetic as it pokes fun at this and that star, this and that aspect of Hindi cinema. The stars partake in the mocking themselves, particularly during the modern portion of the film, and indeed some of these moments are simply comedy gold. A lot of Om shanti om's jokes have already become the audience's own little inside jokes - references that will get repeated lovingly.

There is a lot of good in OSO, I have to say. It's very entertaining, memorable and contains a lot of amazingly brilliant scenes. But my first reaction to the movie was still less enthusiastic than that of many others. I did not get on my knees praising this film to the heavens; it was far from perfect to me, and it didn't even become my new favourite.

The main weakness of Om shanti om is in my opinion the ultimate strength of Andaz apna apna; consistency. OSO is melodramatic parody one moment, and an outrageous comedy the next. The tone changes dramatically post-interval and suddenly there's flavors of thriller, even horror thrown to the mix. It's also hyperly self-aware, much to the point where I couldn't quite get into the world of the movie. The world of the movie so clearly stated that it was just a movie, so much you could imagine somebody soon shouting "cut!" and people rushing to fix make-up or to tear down the sets. The characters were characters played by actors, that's it - so whatever they feel, I don't need to feel. The camera is turned off soon, anyway. Why seek the emotional attachment at all?

Andaz apna apna is self-aware and referential, it's filled with mockery and parody, too. But I still believe Aamir is Amar, a witty, selfish goof and I totally buy into Salman's Prem, an idiot but with a heart in the right place (some have called AAA the Bollywood 'Dumb and Dumber' - I disagree, for one because AAA was released before D&D). The story is cliché-packed to the point of ridiculous, but it is what it is. The genre is slapstick with some witticisms thrown into the dialogue here and there (this would probably be a funnier film, were I a Hindi speaker) and here's the key - it remains slapstick 'til the very end.

It's like I told somebody recently, "When a character in AAA is crying, they want to make you laugh." In OSO, this wasn't the case and when you add my complete lack of attachment to its characters, as a film, it fails to have the appeal to me that films should have. I don't want to return to the world of OSO. I want to rewatch bits of it, but as a whole, I'm not in love with it.

I have some more specific thoughts regarding both films but I best stop typing now - this is getting essay-length and I don't want to bore people reading. I'll try to make for shorter, more concise entries in the future - maybe when it's a film I don't have so much to say about, I'll even manage it. But these two films, and the whole topic of self-referential, parodic Bollywood, it makes me very rambly. For spoilery OSO thoughts, check out this LJ post of mine.
posted by veracious at 11:26 PM

True even when i got down to see OSO
i felt the same way it was quite a letdown after so much of hype regarding the movie;)))