I began watching Vivah, the 2006 Amrita Rao-Shahid Kapoor starrer in curiosity for Shahid, after I had enjoyed his performance in Jab We Met so much (a movie I heartily recommend, by the way). Emphasis on "began", since I did not manage to watch all of it, or even as much as make my way towards the halfway mark.

The reason? Quite simple. I had to surrender in the face of the conservative, very "Indian" values of Vivah. I simply couldn't stomach it. The film's story is that of an arranged marriage - a concept I'm perfectly okay with. But the saccharine sweet family scenarios and particularly the character played by Amrita just made me conclude this was not a film for me. I couldn't wrap my head around why Shahid, why anybody could agree to marry this shy, bland girl who reveals no personality after their first meeting (or I must assume - throughout the whole bloody film). Her downcast eyes, quiet behavior, how she's valued for her beauty (even though she's supposedly an educated, intelligent girl)...

All are reasons why this film makes for incredibly ungrateful feminist viewing. But hey, I'm not looking for feminist heroines in my Bollywood. I know better than to expect all heroines to have jobs and independent lives and kick ass here and there and all over the place. What I would like, however, is a girl who can, oh I don't talk, talk to the hero. Whilst looking at him. Is that so much to ask, really?

However, Vivah is just one of those films. You accept it for what it is, and it's a smooth fluffy sail, I'm sure. If you let these things get to you - as I do, I apologise - then it's not going to work at any step of the way.

After Vivah I needed an anti-dote. Curiously, I turned to one of my favourite Tamil films, Pithamagan, for a completely different reason - I just wanted to rewatch it. But as I began rewatching, it hit me - this was it! My perfect Vivah-antidote. 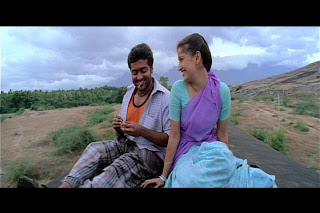 Pithamagan, directed by Bala, tells a story of a boy who was born and raised in the cemetary. Chitthan grows up secluded and doesn't learn human communication, apart from funeral hymns. When he finally wanders out into the real world, he naturally finds himself in a lot of trouble. The film is grim, realistic and portrays the world of criminals and outcasts. Chitthan is played by my favourite Tamil actor, the versatile and unmistakably charming Vikram, who won the National Award for his performance in the movie.

Chitthan is helped out by a jolly fraud (420) named Sakhti, played by another favourite of mine, Surya. Sakhti has a romantic storyline with a college student named Manju (played by the sweetfaced Laila), whose money he successfully cons. She does not take it lightly, however, throwing an absolute fit after losing her money and some of her belongings, and later when she runs into him on the train, she raises all kinds of hell.

Manju is my Poonam-antidote (Poonam is the character who Amrita Rao played in Vivah). She's not the perfect spunky heroine - she's actually quite over-the-top, throwing exaggerated fits when she gets angry, but in the end she is what she needs to be to match Sakhti. He's a criminal, a charming one but not really a very nice guy, and for whatever he did, she's the only person who's not letting him get away, no chance in hell. She even stands up to her father no problem. Manju is quite a firecracker, sure of herself to a flaw, but I love her for that. Whereas some Indian film heroines would get beaten down and stay down, perhaps weeping silently for their pain, Manju would scream her lungs out, then get up, chase whoever beat her down and do her best to beat him down, as well. Whether smart or not, I love her guts!

The way the romance eventually develops is not something I'm extremely fond of - I will not say more as not to spoil anybody - but it does fit into the harsh reality of the film. That Sakhti, deep down a good person, could actually not be good at all, and that Manju, who stands so proudly against whatever stands in her way, could easily be struck down by the evil that exists in the world.

Luckily Manju stays as she is despite the peculiar plot vehicle, full of life and character. 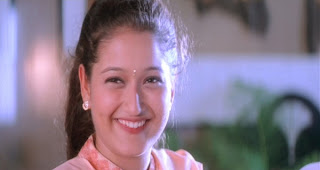 There's a lot of other things to be said about Pithamagan, too, but I'll leave that for another rewatch, and another post. The above image is from another Laila movie, Dhill, not as impressive but I just love her eyes whenever she smiles and feel the post could use a bit of cheering up (as could I, after finishing Pithamagan just now).
posted by veracious at 1:19 AM

Her downcast eyes, quiet behavior, how she's valued for her beauty

Argh, yes, the beauty thing pissed me off too. I was all "WTF, she's going to college! Can't we focus on that?!" :P

I don't know if watching the movie in chunks on YouTube made it easier to deal with... maybe I am just better at putting my feminist stance aside!

Hiya! Somebody told me, "You could play a drinking game with Vivah. Take one shot every time Amrita lowers her gaze."

..and I truly wish I could've! Might've made me able to watch the movie in whole (the youtube watching just made me incredible distracted - made me think, "Or.. I could watch a good movie ..on a dvd!").

I guess it's also about expectations. I expected a cutesy film with family values, just didn't expect them to be that conservative and overbearing. I should've remembered this movie was from the guy who also made HSSH (right?).. Oh well.

Am I the only one who actually liked Vivah or something?! :P

Anita - No, of course not! Check out youtube comments for the movie, it is full of "I LOVE THIS MOVIE!" and "my favourite movie ever".

I really wanted to appreciate the Shahid-Amrita chemistry, it seemed to be working but the values of the film just weren't working for me.

a) i felt that amrita looked sooo bad in many shots..

b) i think i went into a comatose mode ones i stated watching it. or some kind of spooky brainwashing thing happend or i was moved to a parallel universe. because some part of me actually liked it.

c) now for the more important part: Pithamagan !? surya! vikram! oh god and i have not seen it yet. sorry got to go shopping. right now!


ps: ok if i link to your blog now? or still to early?

Baba - yes, go ahead with the linking action.

And do get Pithamagan. The DVD is by Tamilini. The director is responsible for Vikram's first hit movie, Sethu (remade in Hindi as Tere Naam), if you know anything about that, you'll know his films aren't too happy but god, so hard-hitting and lovely.

People might question the realism behind Vikram's character but he does such a good job in the movie, and Surya is so amazing, too.

I dunno - maybe it's the title of your post that's got me all fired up (not really - I'm kidding), but I just feel like stumping for shy girls... I'm shy (not as shy as Amrita's character, though - but then who is?) and I probably don't reveal a heck of a lot of 'personality' and sass on first meeting, but I don't think this makes me unintelligent, uneducated, dependent, bland or boring - except maybe to people who like to make snap judgments. I like to think that someone sensitive might pick up on the fact that the shyness is only a surface thing.. and I think some people have. That said, I will admit that Amrita's character in 'Vivah' is way too demure at the start of the film to be 'real' - even I, defender of all shy girls, wanted to slap her about a bit and tell her to speak up and make some eye contact, ask some questions, show some life - it's ridiculous to just stare at the ground ALL the time. But then again, if you'd been able to stick with it, you just might have discovered that, like most shy people, there's more to her character than meets the eye - she is courageous, smart, sensitive (extremely so - which is probably why she didn't need to ask too many questions) and a great friend - and also the kind of girl to sneak out and have a secret night-time rendezvous with the guy she really really likes. I dunno, sometimes I think people, even within a short time, connect deeper than the surface - they kinda 'know before they know'. But anyway, at the end of the day, despite a wonky and rather disappointing first 30 minutes or so (I honestly wasn't sure I could make it through until I hit the 30-minute-mark), I did end up thinking 'Vivah' was a 'cutesy (really really cute) film with family values' rather than a preach-fest (in fact I thought it a lot less preachy than the usual 'Barjatya formula' dictates - definitely a lot less preachy than HSSH)- but then again I loved HSSH despite the preaching, so I guess 'Vivah' is really just not your type of movie.

And just to be clear, there certainly are some things I didn't like about 'Vivah' - for example, I expected Amrita's character (and her loving uncle) to be proactive about ensuring that her education would continue, rather than wait for the father-in-law to render his verdict... and ouch - I just realised that the previous comment is ridiculously long and I apologise!

Daddy's girl - sorry for late reply. I agree with you though, I'm a shy girl myself - at least in company of louder people, or in large crowds, so a certain bit of shyness is perfectly normal and nothing wrong with it. I think my problem comes in when the shyness is extreme like in Vivah, and also presented as "the way girls should be". Girls should be able to speak their mind, show personality and not have to pretend shyness and demureness if they're not like that, and still be considered good or in this case, "good Indian girls".

You're right, I can't make extreme judgments when I didn't watch all the way through but from what I did see, the portrayal annoyed me so ..yeah. And these sorts of films definitely aren't my kind of films, you're right about that.