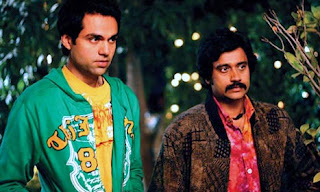 I didn't love Oye Lucky Lucky Oye as much on the second watch as the first, but it's still a terribly fun, all-around well-executed film. The satirical comedy didn't contain as many laughs as I remembered it having, but one thing was certain, at least: the film completely rides on the effortless charm of Abhay Deol as Lucky.

There's a certain easy-going confidence to him in this role, and it's just a joy to watch. Even though to be hustled in real life would just be terrible, it's joyous to watch on-screen. I guess it's the ingenuity of the swindler that makes it so fun, and Lucky is definitely among the smartest of Hindi film's recent slew of con artists.

If you, for whatever reason, have missed out on this film so far, give it a spin.
posted by veracious at 10:47 AM