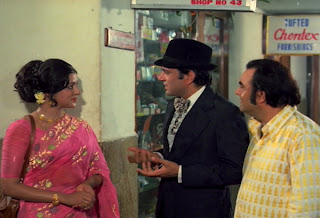 You know, once I was recommended this film called All About Eve. You've probably heard of it, pretty well-known picture. But I completely misremembered the title of the film, and ended up getting my hands on another Hollywood oldie called The Lady Eve, which is an excellent comedy starring Barbara Stanwyck as a whipsmart conwoman. The latter ended up being one of my favourite films of all time.

The same sort of thing happened with Patthar aur Payal (Stone and anklet). I read about Hema's rather interesting role in a film called Laal Patthar (Red stone), which I reviewed here, but when I was browsing my usual online DVD store, I misremembered the title and ended up ordering Patthar aur Payal instead. This was very early days in my Indian film watching, I should point out.. Remembering film titles precisely was not yet a strong suit of mine! 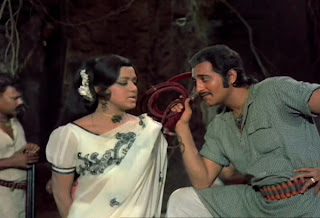 Fairly lucky accident, as it so happens. This was probably the fourth or third Dharam-Hema film I watched, and it became my introduction to Vinod Khanna, who plays the smug-faced villain in this one. The story itself is one of reformation - Dharmendra is a dacoit who falls in love with Hema, and decides to give up crime for her. Ajit portrays the leader of the gang of dacoits, and Dharmendra's father, and Vinod is the brother who eventually takes over the gang.

It's a rather standard 70's flick which I remember fondly because of the lovely dance numbers and perhaps because I saw it so early in my Hindi film watching career. It introduced me to Vinod in his vicious villain avatar, made me like Dharmendra even more as he delivers those bizarre bloody-thirsty "I will avenge this to you, villain!" dialogues. I should honestly rewatch this one of these days, as I've got no idea how I'd rate it now - I have rewatched the songs numerous times, particular this one, where Dharam imagines a dancing girl as Hema.. 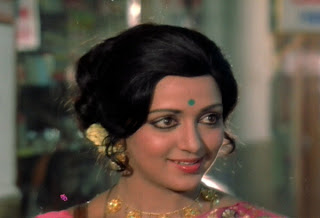 It's funny how films becomes not just a viewing experience but also a part of a story; in this case, the story of a mistaken find that lead to so many more films, and experiences.

Have one more Hema screencap for the road: 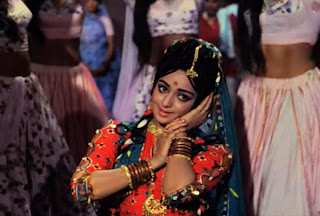 posted by veracious at 7:58 PM