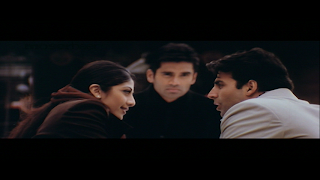 I am not sure who told me or where I read that Dhadkan was quite a lovely romantic movie. It's not. It's the kind of clichéd, semi-tired (although in an amusing way) melodramatic film that we don't really see much of nowadays because I think after the early 00's most of Hindi film industry decided that after the likes of Lagaan and whatnot, they could probably do better than this. And they did! Well, some of them did.

To be fair to whoever planted the idea in my head that Dhadkan might be worth my time, it's not totally without merit. Melodrama, even less-than-average quality melodrama, is after all pretty entertaining. The tropes are all here - poor and rich, evil in-laws, crying maa.. But perhaps because of the tropes, the film ends up being pretty forgettable. 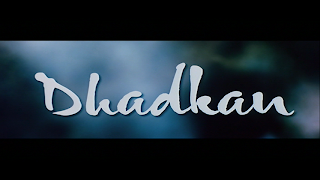 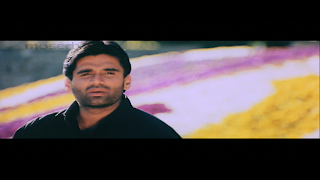 It's hard to pin down what makes Dev such a creepy, strange guy. He's a typical crazy-in-love Bollywood hero, extremely devoted to his love, nothing can break it, he'll die without the love of his life and all this nonsense but what really makes him strange and unbalanced is his over-the-top reactions to everything. Suniel barely has time to act from all the shouting he does.

Look, nobody's ever said Bollywood heroes can't be emotional - by all means they should be. But not emotionally unstable or completely unhinged, like Dev comes off as. 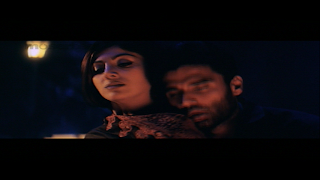 So needless to say, this love match doesn't quite work out as when Dev goes to Anjali's house to ask for her hand, he ends up shouting at her father and obsessing about his sandals (to paraphrase the dialogue, "YES MY SHOES HAVE HOLES, I AM POOR BUT I WILL MARRY YOUR DAUGHTER ANYWAY BECAUSE I LOVE HER NOW AND FOREVER."). Anjali is brokenhearted but tells Dev she will marry who her father asks her to. Dev shouts at her that this is not the last she'll see of him. Oh, goody. 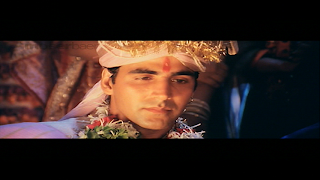 So Anjali is forced to marry the rich, handsome and courteous Ram (Akshay Kumar). What a terrible fate! To marry this ...perfect stranger who doesn't shout at her! Ugh! 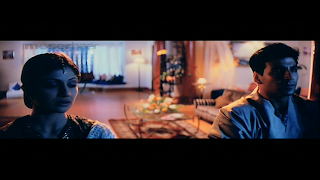 Naturally she angsts a bit. But it doesn't take long for her to find him quite a lovely man to be forcefully married to - he's nice, respectful, devoted, hard-working, insert every possible positive adjective you could think of, because that's how good Ram is. Forget seeing the softer side of Khiladi, this man is practically marshmallow.

And of course, he is much better when in comparison to his awful family who hate their new daughter-in-law and even hate Ram. But he knows they hate him! But he loves them anyway! (Yes, it's that kind of a film.) 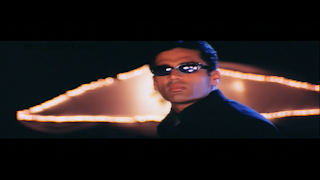 But sometime after Anjali and Ram's marriage has gone from forced to blissful, guess who's back? Dunh dunh dunnnnn!

Thankfully the film seems to recognize that Dev is hopelessly unhinged and does not portray him as Anjali's perfect man. He's just there to set the final melodrama into motion and boy, does he ever. 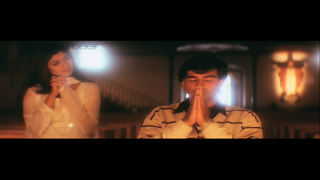 So that's kind of Dhadkan for you, right there. Lots of melodramatic twists, okay songs that look more 90's and 00's, a truckload of make up on Shilpa's face, and tons of Akshay looking dreamy. If you think you might be into that, well, I can't recommend this film but I can certainly let you know it exists.
posted by veracious at 5:28 PM

Yes, a terrible movie. But there's a terrific qawaali sung by Nusrat Fateh Ali Khan. That should count for something. And Akki is sooo lovely to look at!

I don't agree that this is a terrible movie or that Dev is creepy. I find Akki's character creepy because he's so... perfect and decorative. Ugh. I keep waiting for him to flip out and disembowel everyone in the frame. Maybe there's something wrong with me but Mr. Perfect is just too nice, to picture perfect and too unblemished for me to trust him. At all. Give me the unbalanced, unethical and unhinged Dev any day.