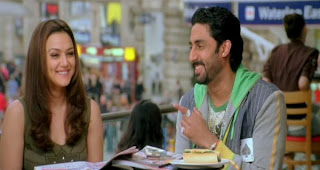 I rewatched Jhoom Barabar Jhoom this evening because despite the criticisms voiced against it, I just find it friggin' delightful. At the core of the movie for me are our NRI main characters, Rikki (Abhishek Bachchan being both hilariously exaggerated and at the same time genuine) and Alvira (Preity Zinta being charming and wonderful), who get to chatting after waiting for a late train at London's Waterloo station and end up narrating their own love stories to one another. Three or so song numbers later, of course, there's a twist.

The thing is, a part of wants to look at JBJ as meta-Bollywood. Rikki and Alvira are kids brought up on movies (despite her claim that she also watches "foreign language movies", Alvira surely has to be a Bollywood/Hollywood film buff at heart!), which is why their love stories are like movies in a movie, exaggerated and glamourized and of course, interwoven with song and dance sequences. Next to this, we have a bunch of other filmi references, fun performances and the delicious send up to the audience is ready to serve. Think the crackiness of Jaan-e-Mann put into the blender of the colorful world of Bunty Aur Babli, placed at Southall and you get Jhoom Barabar Jhoom.

And yet what I love about the characters of Rikki and Alvira is that they're both very, for the lack of a better word, ordinary. Which is to say, they're rather British-thinking NRI young adults, both stubborn and bold and most importantly, similar. Despite the fantastical anything-can-happen world they paint for themselves, in reality they're just Girl Next Door and Boy Next Door of Southall. 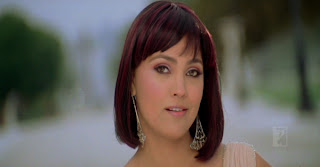 To say much more is to spoil most of the deliciousness of the movie, so instead I'll talk about random points of interest. I'll be frank here: I've only seen Lara Dutta in two movies, this one and No Entry and she always surprises me! I expected her to be wooden but she turned out to be one of the few positive things I had to say about No Entry and in this movie, she simply rocks. If she got more good role opportunities, I have a feeling she could outdo the other Bollywood beauty pageant winners no problem. Something about her makes me think of a modern day Zeenat Aman. Also? Her French-accented Hindi is one of the awesomest things in the movie.

I would have similar things to say about Bobby Deol, who I was also surprised by, but I'm still not too excited about him. If his career continues to include funny side roles, though, I'll keep an eye out. Meanwhile the Dharmendra fan in me just sighs and shakes its head.. 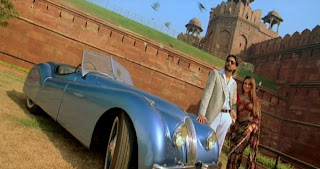 The songs of this film are so much fun, both visually and audially. Towards the end of the film there is a seemingly never-ending parade of musical numbers and while I got very tired of seeing Amitabh Bachchan's special appearance(s as he keeps popping up!) even on the first watch, other songs are a rewatch-treat. The camerawork on "Ticket to Hollywood" is delightful and "Bol na halke halke" is just all-around gorgeous. 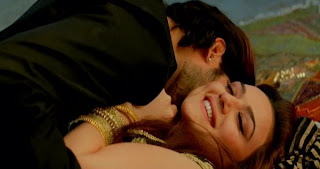 The jodi of Preity-Abhishek fills me with glee. Not only are they stupendously pretty together in this film (Preity especially), their chemistry is just adorable and I think their real life friendship (check out the episode of Koffee with Karan season 1 with the two of them for proof!) really helped with that. It makes me so sad Preity is not given that much movie opportunities nowadays. Bollywood producers need to wake up and stop signing those damned Katrinas and Priyankas. Preity's dimpled smile acts better than some of these newcomers. 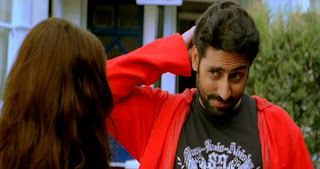 And then there's Abhishek, whose dorky antics as Rikki Thukral should've made everybody and anybody go, "Kya kehre ho?" (Whatchyasayin?) and "I got class!" for three weeks minimum after watching this movie. I always tend to forget how much I love Abhishek and then I see a movie with him, or rewatch an old movie with him and re-realize that love again. His comic timing and facial expressiveness is excellent here, and even though I guess he's doing all kinds of cinema nowadays, I hope we see him in another comedy sometime soon. 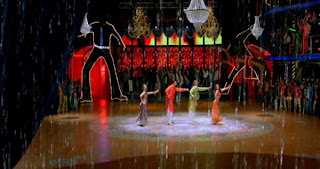 Jhoom Barabar Jhoom is a somewhat calculated movie that failed to interest people at the box office. There is no determining the tastes of audiences at large, I suppose, but for me and plenty of others, JBJ is just a fun Bollywood extravaganza. It's a little mocking, a little self-referential, but not to the extent of Om Shanti Om and its plot bears a few twists, but nothing incredibly complex.
posted by veracious at 8:48 PM

Never watched this one because of Abhi's headband but from your screencaps it looks like he doesnt have it on all the time. So, I may venture into watching this one after all!!!

you know saying that you liked JBJ was enough to make you a social pariah last year but I think it's HUGELY underrated. Its actually funny a way that OSO (i thought) was not. I have watched it four times and have enjoyed it each time. The Taj Mahal sequence is equal parts nuts and perfect romance. Oh Shaad Ali! *shakes head* why do you make movies that leave me in the doghouse for loving them?

I think I need to rewatch this. I didn't like it the first time. i found it kinda boring. Girl, love your blog. Added it to my blog roll.

I loved it; I thought it was very original (please don't tell me it's ripped off from something!)...

Like thechasingiamb, I liked it better than Om Shanti Om, which was pretty enough and funny enough I guess, but had no soul.

I LOVE JBJ. Love it. Seriously, this one and JWM are constantly fighting for my #1 Bollywood Movie spot. I agree with you that Lara Dutta is awesome. And the film *is* entirely too quote-able; my husband and I drawl, "Kya kehre ho," and snap out "I will not let anybody screw you!" at each other for hours after watching it.

Lara was delightful, and I do sincerely beleive that Bobby's careeer would be FINE if he just stuck to roles like this. I think I just found it way too loud- and Amitabh and that everlasting song just began to annoy me by the end of it.

Lara did a good job in "Partner", JBJ and No Entry

but I found her ridiculing tamil language on Koffee with Karan distasteful. She was mentioning that her co-star was a very nice guy in the tamil film she apparently acted in. It is a typical case of bollywood heroines wanting the money and fame that other language films can get them but they have no real respect for the culture and language of the medium they are working on

Bollyviewer - Don't be prejudiced against the headband, he looks good otherwise. :p

thechasingiamb - It really is. It has some flaws and I agree with Shweta it can be quite loud at times but overall, lovely lovely film.

memsaab - To my knowledge, it isn't a remake of anything..

Shweta - As I said above, I do agree that it's loud at moments.

Anon - Oh, that's unfortunate. Then again, I've never held most ignorant statements against BW stars since I simply assume they're never the brightest crayons in the box and do say the stupidest things sometimes.