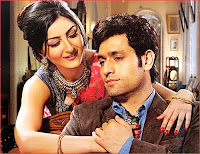 Khoya Khoya Chand is one of those films I find it very hard to phrase my thoughts and feelings about. The story is unique; a young actress Nikhat's (Soha Ali Khan) tale in Hindi film industry of the 1940's and the various stages of her love story with the writer-cum-director Zahar (Shiney Ahuja). It's realistic to the point that it hurts, a tragedy but not quite in the full sense of the word.

Perhaps KKC is just a film where the good doesn't shine bright enough to make up for the flaws. Soha is gorgeous and delivers wonderfully, various other cast members do a great job (Sonia Jeenah stood out for me), the music is lovely, it's full of nostalgic mood and color and the way it looks at the industry is refreshingly realistic. These types of portrayals of Bollywood by itself are rare occurances. The flaws, however.. Shiney once again fails to convince me with his performance, and overall the story drags slightly. In the end nothing seems to fall into place, and as a whole it doesn't really hold up nicely like a movie perhaps should.

I guess one could view it as a fictional documentary of sorts. Maybe there is even some criticism of the current industry hidden in the milieu of history - but this is pure speculation. Just for seeing Soha get to dance, though, I have no regrets, even though this is definitely not a must-own movie for me.

If I tried to have a proper theme to this post, I clearly failed, seeing as how Parvarish is not a 1940's or 1950's - and thus a 'proper' golden age oldie, like the era KKC portrayed - but a 1970's superfun masala alá Manmohan Desai (aka the man behind such brilliant masterpieces as Amar Akbar Anthony and Dharam-Veer - and I say this without a hint of sarcasm, you should know). Parvarish released the same year as the previously mentioned Desai films, and is just as wonderful, if slightly less crazy.

If you've never seen a 70's masala film, here's the 101: there's always somebody whose father or mother or grandfather isn't who they think it is. This movie's title translates, "upbringing" (this I learned thanks to Carla's review), which will reveal enough about the plot than I need to explain here. With these kinds of films, you know you're in for a fun time no matter what happens.

And oh, this film is delicious. Amitabh was fun, the girls (Neetu Singh who never fails to bring it and Shabana Azmi in her gorgeous young avatar) nutty in the best sort of way, then we have older Shammi Kapoor and the legendary Amjad Khan, peculiar but entertaining songs, submarines, diamonds, guns ... Did I mention submarines?

And last but so not least, Vinod Khanna whom I adore a bit too much at this point. But him, his character's grey shades, the brief flickers of manpain he gives in this movie, and oh god, so many things, just completely made the movie for me. Excuse me the fangirlism.

I strongly recommend this to anybody who can cope with these insane(ly amazing) 70's rides. It might be a bit of an undiscovered gem, as I suppose people usually opt for AAA when they go for a Desai film. But yes, see it! Go!
posted by veracious at 10:34 PM

As I started reading this, I thought "Why isn't she talking about Vinod, for he is awesome in this movie?" but then you did and I was so happy. I love Parvarish. It's my favorite masala. I saw it first, so that might be part of it, but I keep returning to it.

Your first masala or first Bollywood ever? If the latter, whoah, quite an intro that must've been. And uh, I found it problematic to talk about Vinod because I was afraid it might end up ridiculously long, ridiculously fangirly and not very sensical. You know, more a collection of sounds than actual word. Guhhhhh, siiiigh, thud (as I keel over from the awesome).

I have enough Vinod love to make 10 Akshaye's, 's all I can say.

First masala. (And now I feel a need to go check that that is in fact true - it's certainly how I remember it.) A sounds post - with screen caps of course - would be very fun.

It almost happened to me yesterday, as I was finding videos of Abhishek to show a non-Bolly-watching friend.

(And even for me, Vinod is way more of a force to be reckoned with than Akshaye will ever be. Supastar!)