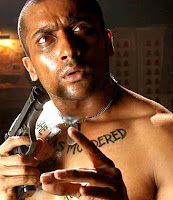 I hate to confirm the rumors. While there are a lot of things in the film that are completely original, the similarities are so glaring they're impossible to ignore. Story of vengeance, short term memory loss, the Polaroids and the tattoos.. What Ghajini simply does is take some of the edge off Memento's narrative in order for it to make a more regular Tamil film. While the outcome will possibly surprise Indian audiences, for anybody who has seen Christopher Nolan's original, it falls far, far behind.

Aamir said in his blog that Ghajini is not a Memento rip-off. Suppose it depends on the definition, but to me there are movies that are inspired by genres, by conventions whilst not borrowing from any specific movie (Pyaar ke side effects would be one example I can think of). This sort of inspiration is fine in my books - it happens all over the world, always has, and often with fantastic results. But Ghajini borrows such specific things, that even if the story is Indianized, the narrative is Indianized, when you have some of the exact details from Memento, I'm sorry, I don't know what else to call it.

None of this necessarily means it's a bad movie. It's definitely an okay movie, partly fantastic even (the Asin-Surya love story told in flashback is awesome enough to make me want to buy the DVD), and Surya's performance is solid as usual. But I'm not feeling the biggest urge to rewatch, or purchase. It's also quite on the long side during second half. While it packs a ton of plot twists, the ending is predictable enough. A special mention to Asin, though, for her character was really lovely in this movie and she performed well. I didn't think much of her in the Vikram film Majaa but she shone in this one.

So, Aamir, do your best. I know my expectations are low enough right now.
posted by veracious at 2:09 PM

Ghajini does borrow the premise from Memento, but don't you think it goes in an entirely different direction once it does that?

For one thing, Memento took that premise and turned it into a reflection on the nature of self and its relation to memory, while Ghajini took a far more conventional route once it started from that premise. In some sense, the protagonist's condition was far more important to Christopher Nolan's film that to Murugadoss' film. The latter just used it as a more interesting way to compound the search for Asin's killer.

However, even when viewed on its own terms, Ghajini does screw up on a number of counts. The Asin segment is woonderfully frothy and enjoyable, but the rest of it suffers from extremely bad writing. I mean, why did the villain have to have an identical twin? Why the senseless climax?

T, you're right, it goes on its own, more Indian approach of storytelling. No plot twist at the end, love story (I can't complain, it was lovely), songs of course, and true Tamil action (plenty of it!) near the climax.

I agree with you that even removed from Memento, Ghajini is not an amazing film. It's okay, and a nice performance by Surya, terrific Asin, but nothing mind-blowing.

the world i live said...

well you also like tamil movies. idf you look at tamil movies from a far they will look cheap. but once you started wathching them you will realise how good they are. of course there are extremely bad movies . but some movies are great. and actors like vikram surya,madhavan are just awesome. well in tamil nadu the biggest star is rajni kanta nd kamal hassan. welkl rajni kant is 57 yeers old but he still plays lead characters. his new movie is a 20 million $ movie called ROBOT and it also stars aishwarya rai.

but kamal hassan is a diffferent type of actor. he plays realo characters and he is a brilliant actor. his last movie is DASAVATARAM which means 10 incarnations.

and his next is MARMA YOGI. WHICH MEANS a monk.(well i think so) and it alos stars amitabh bachhan and rekha. he is alos working in a indo japanese co production.


one greta news for you. do you know VIKRAM is goin to work with aishwarya. the movie isn RAMAYAN(THE INDIAN EPIC) vikram will play teh role of lord rama(the king of ayodha. aish will play goddess seeta and his husband abhisekh will play teh role of evil king of ceylone(modern srilanka)RAVANA. IT WILL BBE MADE BY 'MANIRATNAM' OF 'GURU'FAME. HE ALSO MADE YUVA ,DILSE , BOMBAY. HOPE YOU WILL LIKE TAT MOVIE WHEN IT WILL COME. MAY BE IT WILL TAKE A YEAR OR TWO. BUT ITS GOIN TO BE A GRAND MOVIE

the world i live said...

HEY GHAJINI WILL BE MADE IN HINDI STARRING AMIR KHAN. AND IT WILL RELEASE IN JANUARY NEXT YEAR

tapan - Thanks for the info, though I was aware of most of those things. :)

If you can get your hands on them, certainly! Memento I would even call worth a purchase, Ghajini maybe a rental or if very cheap, a purchase.