Highway, and a journey home. 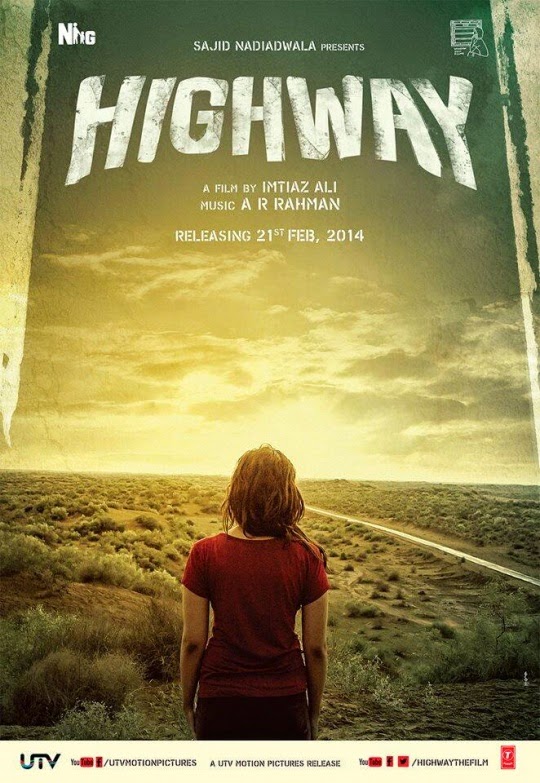 Sometimes being out of the loop, not following every promo and trailer, can be so beneficial for a film aficionado. I didn't expect Imtiaz Ali's Highway to be much more than maybe a strange, Stockholm syndrome inspired kidnapper-kidnappee romance. The pairing of Alia Bhatt and Randeep Hooda seemed strange, and considering her last performance that I saw was the wooden, unbearable turn in Student of the Year, I wasn't precisely hopeful that she actually had considerable acting chops. While every shitty Bhatt movie in Randeep Hooda's oeuvre is warmly embraced by such fans as myself, it's safe to say he's not universally appreciated. Imtiaz Ali is not infallible, either, and it's been in the past few years that his films and scripts have been particularly critisised for the way they portray female protagonists.

Yet, Highway manages to be a very human picture that gives its downtrodden heroine a lot of agency in a difficult situation, and thus allows Alia Bhatt to show what she can do, when acting outside Karan Johar's vapid female stereotypes. Aided by Ali's best script in a long while, this ends up being less of a kidnapping romance and more a film about two damaged people, trying to re-discover what their home in the world might be. It is, in a world, beautiful. 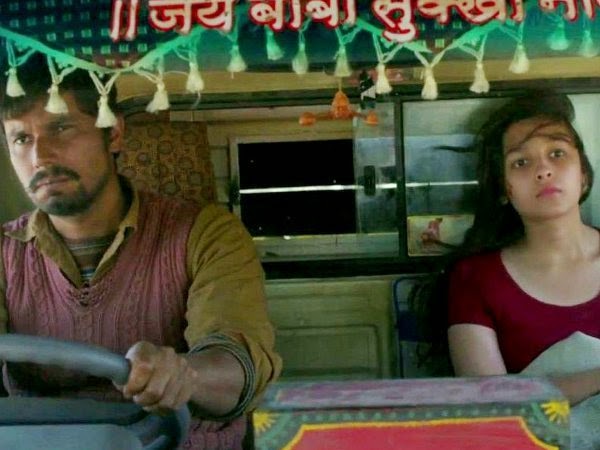 The story reveals all this in a very gradual way, and is all the better for it. Due to that, however, I'm forced to discuss some spoilers, so before the jump, I'll just say this: I loved this movie. It's maybe my favourite Imtiaz Ali picture right after Jab We Met, even if the two deal in two very different genres, obviously. I'll probably have to rewatch it to see how I properly rate it among my favourites, but thus far, it's stayed with me, it certainly impressed me, and I can't think of too many bad things to say about. I'd certainly recommend it.


The central conceit of Highway is that its two main protagonists are not as different as it may first seem - the rich Veera (Alia Bhatt) and the poor criminal Mahabir (Randeep Hooda). Slowly it is revealed that both are haunted by significant events in their childhood, abuse and neglect. As such, I didn't even see theirs as a very romantic or sexual connection - it's more shaped by their need to relate to each other, and the more they understand the similarities between their pasts, the deeper that connection becomes. It's this relationship that really grounds the film, and makes it intriguing, and I was surprised by the ease with which both actors portrayed this. There's just the right amount of forwardness in Veera, who's suddenly freed by the social bounds and norms of her oppressive family, and there's enough hesitation in Mahabir, who has never previously talked about any of this to a veritable stranger.

There is a significant feminist discussion to be had about "rape as character development", where the female character's suffering becomes the source of her strength, but the trope naturally means she has to suffer before she can gain that strength. This isn't necessarily the case here. As much as one might desire another rape revenge trope, especially as the scene where Veera reveals being raped multiple times by her uncle is so emotionally brutal, that's not where the film goes. Instead, this abuse informs her view on her family - caring so much about being proper that they look away from the abuse, thus making her home the least safe and comfortable place for Veera. I can understand female viewers who are wary and weary of seeing rape portrayed at all in films, in any shape, but it's noteworthy here, simply because of the way the focus is always on Veera, her experiences, and also because the abuse happened inside a home, by close relatives, as it so often does. In my 22 Female Kottayam review, I talked about rape myths, and this film doesn't really perpetuate any of them that I noticed. Yes, there are scary, rapey strangers in the world - the character of Gaurav being one of them - but sexual abuse can happen inside the home as well.

It's also interesting that the damage suffered by Mahabir is related to the less-than-human status of women in the family, as well. Never let it be said that abuse and oppression of women doesn't hurt men - indeed, it hurts society as a whole.

I wouldn't so far as saying Ali's portrayal is the most sensitive I've ever seen, but it avoids some of the usual problems of male writers writing raped and sexually abused female protagonists. It's not just a trope used to later lazily make the female protagonist appear strong - you can see Veera is irrevocably altered by the experience, and there's no bouncing back from it to act out a revenge or an empowerment fantasy, but she's also not damaged in a way that wouldn't allow her to never truly be happy. You could call it a stretch that alone with a dangerous stranger is where she feels safer than her cushy upper class home, but considering the circumstances, Highway begins to carve out an interesting argument about what 'home' really is. It's not putting up appearances, or pretending to be happy or comfortable. It's a place where you truly do feel happy, safe and comfortable. And most importantly, perhaps, it's a place you can form on your own, on your own terms.

The soundtrack comfortably accompanies the film, and the cinematography is incredibly lush, highlighting the strange beauty of dusty Indian country roads, and the mountainous beauty of northern India. Smartly the film sheds extraneous characters, the further the two main protagonists continue their journey and become closer. I'm not sure I loved the ending, but I do appreciate how it further highlighted this being Veera's story, first and foremost. I do feel like I may be over-rating this film a bit, as it surprised me so positively, especially Alia Bhatt's occasionally gut-wrenchingly good performance (seriously, who knew?) and Randeep doing his usual, reliably solid thing, and being particularly effective in some scenes, and the chemistry between them. I'll have to rewatch this, for sure, but for now, I'm just in love with it.
posted by veracious at 10:28 AM