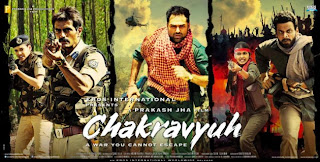 You might've heard that India is at war with itself; hundreds, if not thousands, of people die in this war every year. You might've heard the term Maoist in conjunction to this war, or you might be more familiar with the term Naxalite, or the more academic name - left-wing extremist terrorists. The other side of the war is the central government, trying desperately to clamp down on the violent incidents by brutal force, with varied success.

Prakash Jha's Chakravyuh paints a portrait of this war that is harshly realistic, impeccably researched and sympathetic to both sides of the war, but does tend to give more of a hearing to the Maoists - indeed, Jha said in interviews prior to release that he's met Naxalites, and listened to their side of the story. As an issue-based film, Chakravyuh is excellent and an amusing disclaimer at the beginning of the film says up front that "nothing is coincidental" - everything is modelled after real events, real people and being true to the "war within". At the crux of the issue is that economic development and mining demands evacuation of mineral-rich areas, many of them home to adivasis (often translates 'tribals'), who resent the government for the way they've been treated in these instances. Naxalism is an old strand of India's left-wing history, that gained new momentum as the counter force to these evacuations and general poverty and misery of the adivasis.

These are all things I personally knew already, having read about them, but the fantastic way that the film presents these real-life facts and issues is commendable. It asks the age old political question: will capitalism really lead to better lives for the poor, or will it merely line to pockets of foreign company owners? 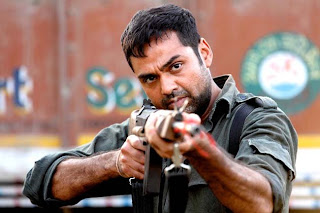 Perhaps due to my own fascination with the problems the film deals with, the actual story took a backseat in my viewing experience. Kabir (Abhay Deol, wonderful as ever), who manages to go undercover among Naxalites to help his friend Adil (Arjun Rampal), the SP trying to rid the area of Nandighat of the left-wing extremists, who act as the unofficial police force in the area. Anjali Patil plays Juhi, the Naxalite commander who Kabir ends up getting close to, while Om Puri and Manoj Bajpai play the other central Naxalite figures.

Through Kabir's story, the Naxalite side of things becomes extremely well-rounded, and you understand their side of the dispute. These are not simple issues, however, and perhaps the one flaw of the movie is that it gives the Naxalites almost too sympathetic a hearing. We hear from the other side how many Naxalites merely use the movement as a way to gain power in society, rather than to make the lives of adivasis better, but we don't really get to see this greed for power in any of the Naxalite characters. There is cruelty among them, certainly, but I don't think there's a single flat-out evil left-wing extremist in the film, whereas to balance the morality of Adil's character, we get a few bad apples among the police. The film doesn't seem to really ponder whether violence is the answer to all the concerns of the poor people the Naxalites claim to represent. On the other hand, an alternative reading would be that they turn to violence because nothing else seems to be working - they have no other alternatives to it. But is that really so? 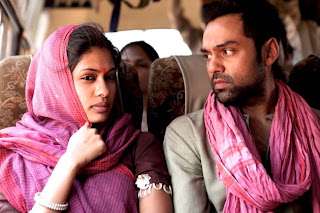 As far as performances go, both Arjun and Abhay deliver, as can only be expected, but the real joys of the film are the secondary characters. Om Puri as the steadfast ideologue was great, and Anjali Patil as the passionate, strong and driven Juhi is simply a joy to witness. Something about the relationship between the two main characters never truly becomes the centre of the film for me, but rather Juhi's character, and I really wonder why that is. Perhaps in the process of writing this well-researched script, Jha too became too fascinated with the issue at hand to focus all his attention on the drama that presented the issue.

The film ends up straight-forwardly asking a lot of pertinent questions. The war is horrific, and seemingly endless and inescapable, but what are the solutions to it? Can both sides give up on something to gain peace? It's an important issue, perhaps the one issue India has to face before it can move forward, and the questions the film asks also resonate to a lesser extent to the problems faced in other countries, such as growing inequality. As an issue film, Chakravyuh scores nine out of ten in my books, but as a film that tells a story, it doesn't quite reach that high. Still, it's worth watching if you want to learn more about the political realities of India today, or merely if you like Jha's style of film.
posted by veracious at 3:14 PM