(This review contains SPOILERS. If you've not seen the film, I would recommend either reading until the "read more" jump, or just watching the film and then returning to this review. For all its troubling aspects, I'd recommend this film.) 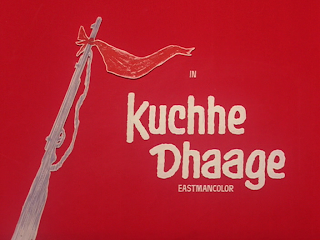 Raj Khosla's late 70's dacoit drama Kuchhe Dhaage began so conventionally, I thought I knew precisely what was coming. Nirupa Roy's husband dies due to a testimony from a man named Tulsiram, and she vows that her son will avenge his father's death. We see the baby pick up a toy gun from a line-up of various items; his destiny is sealed.

I thought to myself, "Wouldn't it be interesting to have a film that instead of embracing the revenge-as-destiny trope, is a treatise of how incredibly damaging and horrible it must be to be brought up to avenge your father's death?"

And, as if the film could hear my inner monologue, this is precisely what Kuchhe Dhaage ends up being; it turns a critical eye on its own convention and follows that to the horrible conclusion that the convention bears. For that, I became a fan of the film. 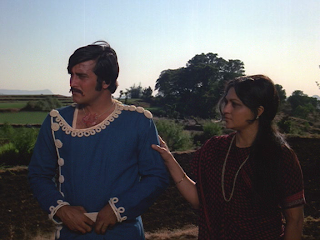 Vinod Khanna plays Lakhan, whose life's sole purpose is this revenge, and Nirupa Roy is the typical steadfast, proud mother, spurring him on. Lakhan gets to enact his revenge rather early on in the film, and following the death of Tulsiram, he comes home to his mother, bearing the dead man's blood on his forehead: 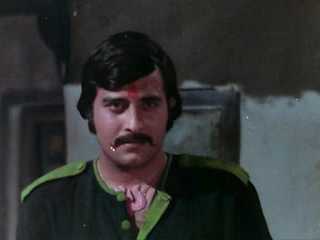 In rather typical fashion, the story continues as we find out that by this action, Lakhan has made himself an enemy. 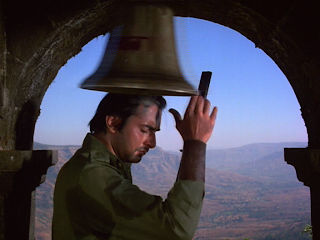 Tulsiram's son, Roopa (played by a dashing young Kabir Bedi), does his own vow - to kill Lakhan to avenge his father. And thus continues the pointless cycle of death and enmity. 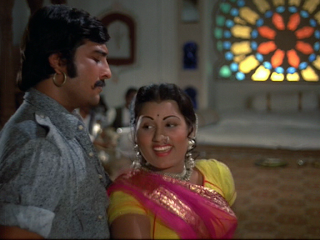 But it's also where the "treatise on how messed up all of this is" thread of the plot begins. Lakhan visits a brothel and after a dance sequence with an actress that resembles Madhubala to an eerie degree, things take a rather dark turn: Lakhan kidnaps the young naach girl, and rapes her. Repeatedly.

Everybody, especially his mother, finds his actions deplorable, but in a way it's a storm of their own making. He's brought up to be a monster whose sole goal was violent murder, and now that that's done, he's unlikely to go on to lead a normal, law-abiding life. (Of course, I don't think this absolves him from personal responsibility, and in true filmi fashion, I think the film is a little too easy on him in that regard. But it's fascinating to watch them turn this revenge-as-purpose trope belly-up, and what is revealed is not pretty in the least.) 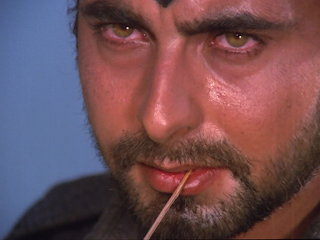 And it's not like Roopa is our hero, either. He's as hellbent on revenge as Lakhan once was, and cares little for anything else. Roopa's revenge is never about the horrible acts Lakhan is committing in the present, but the death of his father. Roopa could've become the audience's moral compass, joining forces with the police to take down Lakhan and get him convicted for horrible crimes (mirroring what Tulsiram did), but instead he's single-mindedly focused on fulfilling his own vow, and blinded by this focus to see what it did to Lakhan.

The film shifts focus onto the enmity between these two, and we see how their desire for revenge binds them. 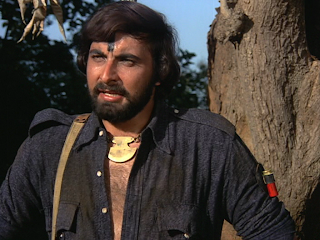 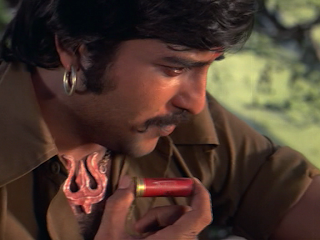 They both get identical bullets to kill the other one. Lakhan is still a monster, but now he's found a new purpose: to kill Roopa, just as Roopa's focus has now become to kill Lakhan.


In what is probably my favourite scene of the film, Lakhan's mother disowns him for his horrible actions, and he delivers a monologue that frames the crux of the film. 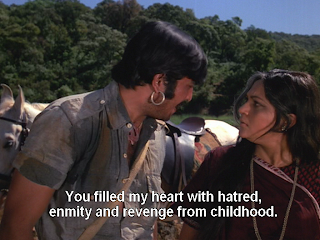 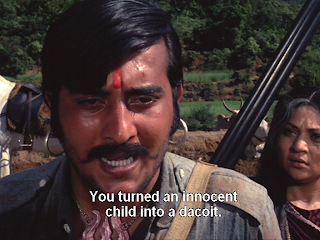 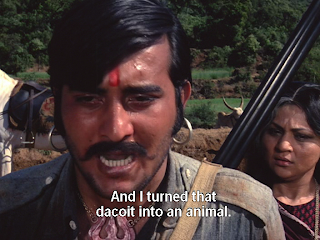 What I especially like is the fact that he doesn't completely let himself off the hook. It's not a pity party speech; while it doesn't help that your whole childhood is filled with training for future violence and hatred, it's not like you can't turn away from that path by your own volition. Lakhan did choose to become a monster, even though it didn't look like there were a whole lot of other options. As we learned from Parvarish (because 1970's Hindi films are my core life philosophies, yes indeed!), parenting does matter, but you can stray from the path somebody else chose for you. It isn't impossible. 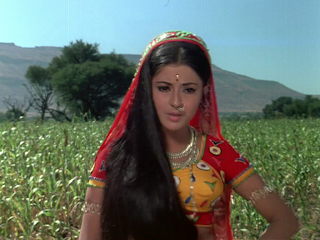 Moushumi Chatterjee plays the village belle Sona, who comes across both men and whose vivacious personality impresses both as she helps a wounded Roopa hide from Lakhan. 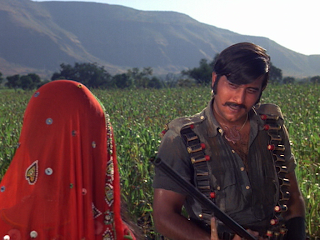 At first I thought this character might become a further chess piece on the gameboard of their epic dushmani  but luckily she turns out to be something else entirely. Roopa and Lakhan's mutual interest in her seems romantic but turns out to be more innocent; they simply like her, and in that patriarchal fashion, want to protect her.

She actually unites them. 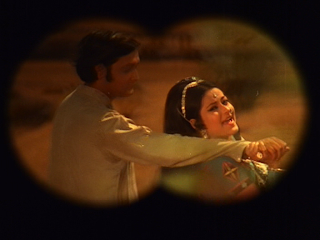 And when her reputation and her impending marriage to the boy she loves is in jeopardy, our two messed up dacoits join forces, in a twist that reveals something the audience already knows about the two: how very similar they actually are.

This, for me, was the real find of the film. I loved the fact that the film didn't just showcase people avenging other people's deaths but actually seemed to consider how deeply damaging this was to a person. And I enjoyed the enmity between the two main characters, even though I found myself thinking I knew where the story was headed and was afraid I'd get bored by the cat and mouse eventually. 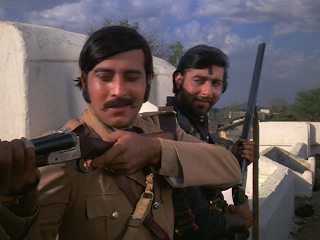 But Sona's cause uniting our two enemies turns their connection to one another into something else entirely, perfectly showcased by another favourite scene, where the two talk about the horses that they stole from one another while defending themselves, each other and Sona from the police. It's banter, friendly and joking, and with none of the hostility you might expect from people who literally have bullets with each other's names written on them. 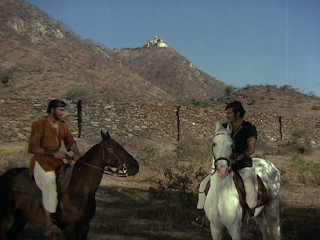 Epic dushmani bears little fruit, but epic dosti brings the goods. How the film goes from one to the other is rather awesome, and makes the finale oh so worth it. 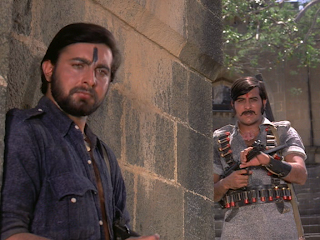 The ending is positively romantic and poetic in a strange way, and so incredibly fitting I knew I had to give this film the spoiler-filled write-up it deserved. I shan't say more - if you've seen it, you know exactly what I mean.

I got this film from Beth, as she'd ordered two copies by accident, and thanks to some weird brain synapse I had, I thought she'd already seen it and liked it. While on the first watch, therefore, I thought the film had her Seal of Approval, which probably made me like it to begin with. The second watch confirmed my enjoyment of the film, however. It's not the perfect film, but it's got all these delicious twists, great acting and despite turning on its convention a little, still all those dacoit drama elements my heart desires. The fact Vinod plays an absolutely reprehensible human being should lessen my liking a little, but somehow the moral prism of the movie doesn't quite redeem either of the main characters so much that I'd be appalled by it. It's much like Mera Gaon Mera Desh, also by Raj Khosla - he plays a truly bad character, and while I don't like the character, I enjoy watching him play out that badness.

In a sense, I only root for them in the end because they're helping out Sona. They do one decent thing, but they know they're both bad people, and the former doesn't erase the latter.

On the other hand, if I was to argue with myself, the "rebirth as redemption" (is there redemption? is it merely a second chance at a messed up life?) aspect makes the whole thing a bit muddled. The decision to take each other's lives is theirs and theirs only, so do they actually, by this action, redeem only their horrible actions to one another? Does Lakhan truly realise the weight of his crimes against the women he raped and killed? I'll admit the film might take a very patriarchal route on this issue; in the end, the horribleness gets framed within Lakhan killing Tulsiram, and beginning this cycle of violence, and Roopa following it. What do the female victims count for? Again, this might require more pondering and discussion on my part - feel free to chip in below in the comments.
posted by veracious at 3:34 PM

Got to see this one.Reminds me a lot about the Bahadur comics of the 80s.Except Bahadur chose not to become a dacoit & got disowned by his mom.Can't help thinking that Nirupa Roy would have done the same to Lakhan if he chose not to kill Tulsiram.

Extraordinary website! (i hate the word "blog") A 20-something Finnish explicating wonderfully on India cinema! One-of-a-kind :) I'm fascinated by your analysis of this film -reminds me of Bharadwaj Rangan. That shot of Kabir Bedi under the bell, and later of him and Vinod K in the same frame recalls the colour scheme of Back Narcisuss - i feel that so many yesteryear Hindi films would have immensely benefitted from more sophisticated camerawork and background music,even if the story treatment remained conventional. Would you also recommend the cinematography of this film?