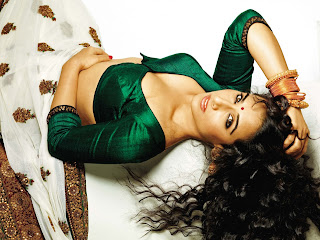 Despite the perhaps all-too-academic sounding title, I simply wanted to write another post about The Dirty Picture for a very simple reason. I read bunch of reviews that looked at it critically, analysed it a bit and perhaps concluded it wasn't a film worth its hype, or even worth the price paid for a ticket. And even though I disagree with that assessment - I still love the film and anticipate rewatches! - I did agree with some points those reviews brought up. (This is not the first time this has happened, obviously. I can agree with a lot of things about my favourites which other people found fatal flaws.)

The biggest question for me are the multiple conundrums the film throws at us and perhaps doesn't quite resolve. Silk's sexuality gets center stage, but Silk herself - or even deeper, Reshma, doesn't. Perhaps rightly so, you may think. Isn't her sexual agency what made her who she is? It's what carries her through. She uses it to her magnificent advantage, and perhaps best of all, does not let anybody victimise her for doing so. She's not a meek girl who a sleazy producer propositions in a typical casting couch cliché; she goes out there and does whatever she feels she needs to do, and things simply click in place.

However, this is not a survivor story - when she has her final down to end the supreme high she's been riding on, she still has agency, but doesn't pull herself back out. She perseveres through hatred, but not sadness.

People have commented a lot on the fact that all this story is framed through the words and perspective of the man who hates her, Abraham. This is, depending on your perspective, either an interesting choice or a lazy one. Lazy one, because it allows Silk to be displayed precisely for this sexual agency that Abraham, in almost an unabashedly misogynist manner, loathes. It provides the masala and the titillation for the masses without scratching deeper into the character that Vidya Balan so beautifully portrays.

But this choice can also be an interesting one, because this allows the viewer to question their own viewership. When Silk is framed through Abraham, it becomes clear that we're getting a version of her story, rather than her actual story. We, just like Abraham, merely sit in the audience of the film of Silk, rather than truly stepping into her shoes. We're the same audience Silk builds her success on, but at the same time the one who categorises her into the role of a vamp, so she cannot show she can do more. We don't need to be shown more, we're happy with the sexy song and dance, to have our base need for entertainment catered to.

I say we, but obviously I don't know what everybody else was thinking when they began to think through this film. I can't make this judgment about everybody. But I did start to have these thoughts, because this kind of stardom, this idealised, fragmented idea of what a star is like, is very important to Indian films. The film remains a masala, and I'm not trying to portray it as anything but - it doesn't blatantly hold up a mirror to its audience, but there are these things that rather make me wonder.

I've got this book on Marilyn Monroe, only it's not a book about Marilyn herself, or rather - it's precisely that. It's about the Marilyn created, the stories told of her, the reality that is constructed with bits and pieces of her myth, from her dyed blonde hair to her tragic suicide. We all know her story, and we all have a version of this story; we see her as a victim, or a queen, or a little girl who was just lost, or a woman exploited by men, or whatever. And there are stories similar to hers, and these kinds of iconic women with tragic endings tend to fascinate the culture at large. What happened? What went wrong? Why wasn't she the ideal that we saw on-screen, but just a human being who was sad? Or is that just another interpretation, desperately trying to reach some sort of conclusive truth where none can be found?

So you can see why the film makers wanted to tell this story, because it grips people, it fascinates people, and everybody wants to get at some sort of greater truth of it all. That's the nature of stardom, even when it's built on raw sexuality, the distance between the "real" person and the "star persona".

The question remains - could we get Silk's real story? Or would we be more satisfied with this version, because it creates the myth on our behalf - even through the imperfect lens of Abraham's character?

Wow, wonderful write-up! I haven't thought about Abraham as a narrator for that reason, but it's a good one if you liked the movie - as I did.
And I don't think it's real masala, because real Masala films don't make you think about things, they don't leave anything to the viewer. But I've thought a lot about The Dirty Picture.

Hmm, the question of masala is interesting, because masala is obviously a mix of things. I'd say TDP has some of those masala elements but whether it's a full-blown masala that only or mostly aims to entertain is up to the viewer's own interpretation, I'd say.