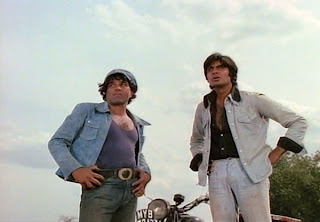 The best way I've been able to explain to a non-fan of Indian films why they're so very long when compared to European or American films, is the book comparison. An American or a European film is like a short story; short, succinct, lacking the layers, the backstories and the variety of characters. An Indian film is like a novel; all of the plot twists contained, using time to tell the backstories in whole instead of just referencing them, often without a structure that's set in stone. (If you've read a book and then watched the Hollywood film version of the same story, you'll know what I mean.)

That's not to say shorter "western" films can't be layered and deep when it comes to storytelling. It's just that the format is different, the way of laying out the story is different. Editing, especially with older Hindi films, is different.

I don't know a better example of this than Sholay, which I recently rewatched with some total newbies. The film's a bit too long for their unaccustomed attention span, but regardless of this, they enjoyed it. 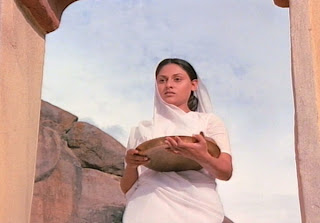 I think a part of Sholay's appeal is exactly the fact it's like a novel. It sets up the premise; Thakur (Sanjeev Kumar) seeking two crooks, Jai (Amitabh Bachchan) and Veeru (Dharmendra), who he had an altercation with in the past, but who also saved his life. Cue the train scene, packed with action. Unless you read a plot description or the back of the DVD box, you have the benefit of suspense. Why does Thakur want contact with these two criminals? An extended comedy sequence at the jail and a song (legendary Yeh Dosti) later, we finally find out: Thakur pays them to nab the villain Gabbar Singh (Amjad Khan). With a fateful flip of the coin, Jai and Veeru agree to this. 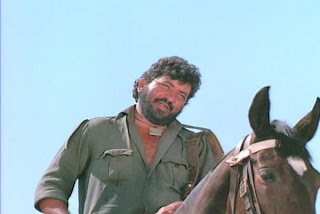 Sholay was the first 70's film I ever watched, back in the day, and I'm glad I saw it without the incredible weight of expectations learning about its fame would've put on the movie. It was all new, and it was all great.

It lays out all of its plot strands so fantastically it's hard to get bored despite the length. We've got the friendship of Jai and Veeru, and their task of catching Gabbar zinda (alive), as Thakur emphasizes. We've got romance of two sorts; full of sparks between Basanti (Hema Malini) and Veeru, and more intense, filled with silent looks and a sense of longing between Radha (Jaya Bhaduri) and Jai. We've got the eventually revealed backstory, the reason for Thakur's longing of revenge, and we've got the delicious glimpses of Gabbar's revolting cruelty. 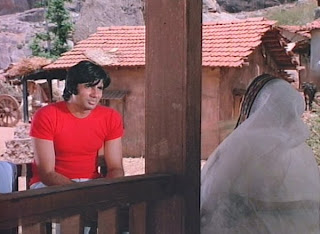 We've got songs, not classics just because of the music but because of the story they're woven into. We've got comedy, like Jai discussing matrimony of Veeru with Basanti's aunt, a scene that had even my newbie friends laughing loudly.

We've got the side characters, like the Imaam of the village, and his son, and we've got plenty of action scenes. 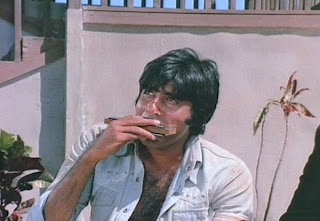 In retrospect, after tens of 70's masala films watched, I can truly appreciate that Sholay isn't just a favourite, a film universally loved, it's not just a well-made movie. It's also a pretty unique story. The village setting is one reason for it and a villain that's not rich in a glitzy manner, but simply filled with greed of the rustic kind; Gabbar doesn't steal gold, he steals grain. He doesn't have the masala staple westernized girlfriend hanging at his arm, either.

The "lost-and-found" storyline of so many a 70's masala film is also missing (for examples, see pretty much every Manmohan Desai film). In fact, there is a curious lack of family for nearly all the characters. Jai and Veeru only have each other. Thakur has Radha and his servant to accompany him. Basanti has her mausi (aunty), a caring but mostly comical bond. Gabbar has Sambha but pretty much everybody else is exposable in his eyes. An interesting twist to the story is that these orphans, these lonely individuals, don't seem to be that sad or lonely. Friendship for Jai and Veeru, independence for Basanti.. They may have lost family but they never gain it magically back, and it all feels very right. 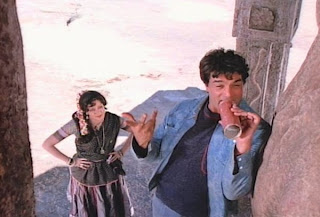 Sholay is a journey. It deserves nearly every minute of its lengthy running time, considering the story, the themes, the plot strands, the characters. It really is like a novel, not afraid to elaborate on its characters with long-winded flashbacks or not entirely needed comedy scenes. And why shouldn't it, when the outcome is as enjoyable as it is. 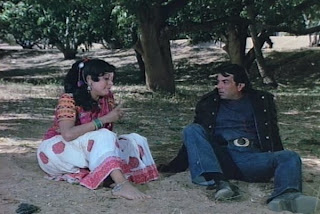 And to end this post, have a screencap of the pair who became by go-to actors for me when it came to oldies, Hema Malini and Dharmendra. I loved them in this and many films later, still think this is the greatest time they've ever been paired together.

PS. Need a reason to rewatch? Why not catalogue Dharmendra's hair continuity mistakes in a chart of some kind? My favourite look is the Soorma Bhopali scenes look: 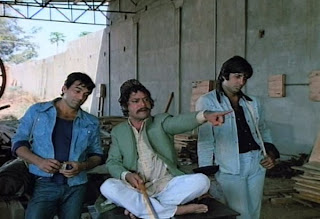 OH! Sholay was my first taste of 70s Bollywood too, and though I am still discovering the glory of old-school Bollywood, I am pretty confident that it will remain one of my all-time favourites! I lent my copy to a couple of friends who had never seen a Hindi film before and they ended up loving it!

Hey! Really like the 'Hindi film as novel' idea, I'll certainly use that to defend the length of the films, in addition to the soundtrack (many of which aren't integrated well enough at all to tell a story, alas...).

This is by far the best review of "sholay" in blog land. Congratulations! You have captured the essence of the popularity of Sholay. It is truly an enjoyable film even after so many decades!

Ness - Yeah, it's great how it works even on total newbies. :)

TheBollywoodFan - It's a pretty good justification, yep. Not accurate with some of the worse films but certainly fitting for the better ones.

Filmbuff - Thanks so much!