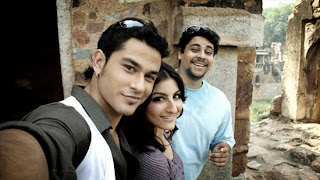 I'm utterly behind on new movies, but for whatever reason, the film 99 caught my eye and inspired by my recent rewatch of CDI, I knew I had to at least try and get back on the '09 Bollytrain. I actually don't remember why this film sparked my interest. It might have been Filmi Girl's post in which she asked, "Why isn't Kunal Khemu a superstar yet?".

And besides him, this film has the fantastic Boman Irani who I love the hell out of in pretty much everything but this was one of his most brilliant roles and performances thus far. I was filled to the brim with Boman love. And Soha Ali Khan, pretty and charming, definite girlcrush of mine (though I admit, has ways to go in terms of acting - she gets good roles, though!). And and and Vinod Khanna! In older form, but still fantastic. Oh. Oh.

Wait, story? Fine, if you must know. 99 takes place in 1999, before and after the Y2K panic and follows the journey of two small-time crooks Sachin (Kunal Khemu) and Zaramud (Cyrus Broacha) who go from being independent to working for the bhai AGM (Mahesh Manjrekar). The perpetual gambler Rahul (Boman Irani) owes AGM money, so Sachin and Zaramud are forced to go to Delhi to collect money.

It's one of those films that isn't mind-blowingly amazing but solid enough and so well-written that you begin to believe in its world, laugh out loud at its clever little jokes and enjoy the ride its characters take into the unpredictable world of betting. Lacking of traditional song picturizations but packed with interesting music all the same, it's one of the few less loud Indian comedies I've seen. (Not that I mind loud comedy -- but I appreciate more situational comedy when well done.)

Kunal Khemu definitely has the acting chops to match his looks and the comic duo of him and Cyrus Broacha worked nicely in here. And I can't fangirl Boman Irani enough, and I also liked Simone Singh in the small role of his wife (which also amused me, because I recalled their jodi in Being Cyrus). This film just had its own style, and that style worked perfectly.

Sometimes I review movies to discuss them, sometimes to warn about them. And sometimes, as with this movie, just to recommend them. It's a fun little film I bet tons will be missing out on. It doesn't look like 2009 is a great year of Hindi films so far, so you might as well give this one a go.
posted by veracious at 7:47 PM

Enjoyed 99 thoroughly. Great comic timing from all the actors. I have a review of it in my blog. Did you enjoy the music?

I'm so glad you enjoyed it!! This is exactly the kind of film that should be playing in art house cinemas all across Europe and the English speaking world. And yet... I think you're right that people will miss out.

Not every film has to be life-changing; some can just be delightful - like 99.

(And WORD on Kunal Khemu!! I still don't understand why this guy isn't a superstar hero.)

Absolutely funny this movie is. One liners are fantastic.

I liked him in the suprisingly-good-if-heavy-handed Kalyug. Haven't seen any of his other films, though.

I have a total crush on Kunal Khemu, but still haven't gotten around to watching this film. Hopefully soon.

The movies was good.

Sounds really good... thanks for the rec! And you're right, Soha does get pretty cool roles - don't know why though! Maybe it's those unconventional looks.

it was a good comedy ..but looking forward to kaminey ..the trailer is awesome.. anyway chanced upon this blog through ppcc..brilliant blog i must say i always like to hear what non Indians have to say about Bollywood ...keep it up...anyway..but i have noticed that you haven't reviewed any Hrishikesh Mukherjee movies which were gems of 70's cinema and projected amol palekar as middle class man with whom everyone can sympathize with... and awesome movies like Chupke Chupke, , Anand, Abhimaan, Guddi, Gol Maal, Bawarchi, Khubsoorat naram garam etc ..and one particular mention that was similar in tone but very good was choti si baat ..you must have seen the movies but i haven't seen any reference to them

and other movies i would like to suggest are 2005 sudhir mishra's award winning Hazaaron Khwaishein Aisi Haasil and if u liked omarka u must see the director's other less known but nevertheless brilliant venture the Blue Umbrella and put in roja too :D

Bhargav - Indeed I did enjoy the music. Cool music that always fit the scene but stood out enough for me to notice how groovy it was.

Filmi girl - Maybe our persistent plugging of the movie will make people interested enough to watch it. Let's hope!

Lapetitediva - You definitely need to check this out! And I don't remember reading much about Kalyug, will reconsider watching it..

Anon1 - Will keep an eye out for that movie.

Anon2 - The girl obviously gets to pick all the good movies, especially of the not-so-commercial side.

rPs - I may not have reviewed H. Mukherjee movies but I have seen Guddi and Chupke Chupke (own the latter on DVD). I'll try to type up a review at some point. Thanks for the recs and the compliments!

I watched this movie mainly because of your review, and was not disappointed! So thanks for the rec. I would have ignored it otherwise, probably.

I agree with you on Kunal Khemu -- he's got a sort of easy charm and never seems to try too hard to get our attention. And yet, he manages to get all of it!

As for being a superstar, he did star in a movie called Superstar so I guess that ought to count for something :-)