Tamil Nadu politics, let me show you them. Iruvar. 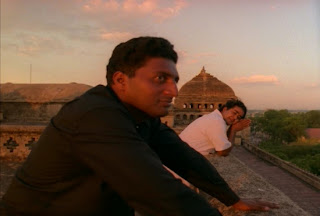 How much do Indians love their films? Enough to promote their favourite stars into their political representatives. I know my favourite Bollywood actress Hema Malini busies herself in the Parliament nowadays (I don't pay much attention to her political beliefs; based on what I've heard about BJP, her party of choice, I doubt I'd agree with them) and she's not alone, far from it.

In the South-Indian state of Tamil Nadu, the relationship between films and politics is undeniable. Iruvar, one of director Maniratnam's best works, draws from this relationship - it depicts the lives of two men, who start out as friends working in the film industry (Prakash Raj plays the writer Selvam, Mohanlal the actor Ananda) and end up as political rivals. The story is loosely based on MG Ramachandran and R. Karunanidhi - two big names in Tamil Nadu's political history.

It's a little confusing, watching Iruvar without being aware of this connection. The film would end up as quite a vague whole without knowing the history of it, and the complications and controversies that rose from Maniratnam making the film. 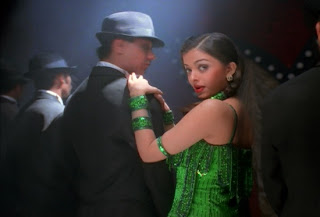 Regardless, the film is definitely worth the watch even for those of us not too versed in the political history. It's a fantastic piece of cinematography, has a memorable A R Rahman soundtrack, as well as a star whose face the whole world would come to know; Aishwarya Rai makes her debut in the film. And while I'm far, far from being a fan, she is quite lovely in this. She's surprisingly sufficient in the role based on the actress-politician Jayalithaa (who marries MGR and carries on his political legacy, too). Her pairing with Mohanlal is far from believable (not to mention perhaps just plain gross), but Aishwarya does good for a debut performance.

Prakash Raj is an actor who belongs to my secondary top ten of actors, but this is without a doubt the best I've seen of him. He's nowadays seen mostly playing father roles or villain-y father roles in Tamil/Telugu flicks, and he's very good at that, too. But in here? He's intense in every single way; as a lover to Tabu's character, as a spirited politician, as a passionate poet. If I ever buy the DVD, he will be the reason. 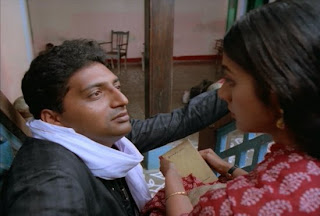 It's difficult to analyze whether Iruvar's greatest shortcoming is really a flaw at all. It ties closely to reality, it probably makes a statement of some kind, and the implications of the last monologue by Prakash Raj's character are up in the air.. Is it great cinema only if you've done your homework? The texts of history basically shape the film into a cohesive one; without them, it's slightly difficult to grasp certain things about it.

Whatever your education level regarding Tamil Nadu history is, this is one film you shouldn't miss out on.
posted by veracious at 12:50 AM

I am intrigued- will search for a copy. Thank you for all the good Southie coverage!

I recently saw 2 old movies of Hema Malini - Dream Girl and Charas - both with Dharmendra.

They were enjoyable. No wonder she is called the Dream Girl of hindi movies!

After Nayakan, I believe Iruvar is Mani Ratnam's best film.

Iruvar is the most under-rated movie by Maniratnam!!
Great to see your reviews. Keep writing!!

I think you must see Maniratnam's Nayagan , waiting for your review on it.