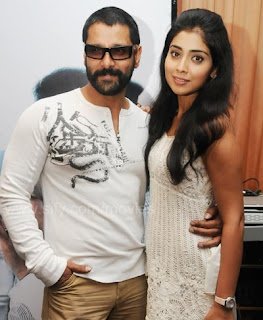 Stars of Kanthasamy, Vikram & Shriya.
Or, as I should better call it, the year out I missed out on a lot (a lot).

To be fair, I always do and I always will. There's no way for me to watch things in theaters, so I end up either going pirate or waiting for DVD release, and neither one is optimal for catching things when others are discussing them after their release. Sometimes I catch those initial discussions and end up deciding against seeing a film, and sometimes enough time passes that I become quite unexcited to see a film I was initially really psyched about. It doesn't even need to be everybody hating it that does it; sometimes it's simply that people who saw it seemed very lukewarm about it, and I tend to assume my reaction would also be really lukewarm.

Anyway, going through my blog for the past year, I noticed I've only really seen the following 2009 films:

That's a total of nine Indian films. Nine! Even if I was peeling the cream de la creme, that is pretty bad. I'm technically watching three industries (Hindi, Tamil, Telugu), though admittedly I only stay on top of Hindi films and then handpick whatever my favourites are doing in the Southie industries, so the pool to choose from is wide. I should have seen more than nine films total.

I don't really feel comfortable making lists of any sort. Out of those nine, my biggest favourites were Kaminey (for pure quality and pleasure), Wanted (all my favourites huddled up in one awesomely action-packed entertainer!) and Kanthasamy (Vikram being deliciously Vikram-y). But still.

Off the top of my head, here's what I definitely plan on seeing in '10 in order to catch up a bit:

Films I might end up seeing, but promise nothing:

Dev. D - Curious about this one.

Wake Up Sid - I know everybody and their mothers and aunts and neighbours' cats get excited just thinking about Ranbir Kapoor but I don't dig the guy (yet) and so I'm just enormously apathetic about everything he's in and people are all a-squee over this and I'm just like, "really? umm I guess I should but I dunno.." and this is becoming a problem.

Luck by Chance - You know, I began this, and I was like "oh it's all right" and then I read what people thought and it was like this huge cult of LbC and it was all "best thing ever!!!" and I've been apathetic about seeing it ever since. It's got Farhan, it's commenting on the industry itself.. Why am I so unenthusiastic? Weird, yaar.

13B - Maddy's done another Hindi film and I totally missed it! Shame self, shame.

Paa, Kurbaan, New York, Rocket Singh - Maybe? But all of them are pretty big maybies.

Well, that was all pretty dull. Let's just wing this one! 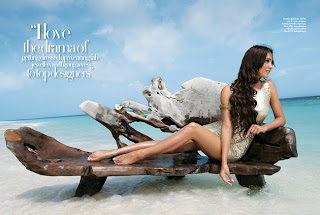 Biggest "This Lady is Awesome and Should Get Better Roles" Realization in '09 (For Me Personally, Obviously):
Lara Dutta. I think Billu and a rewatch of Jhoom Barabar Jhoom did it for me. Get with the times, Bollywood! She's foxy and charming and could do with better offers. 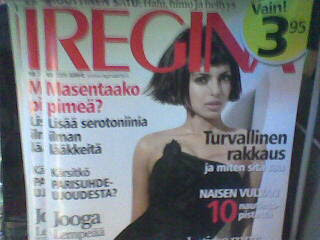 Biggest Reason I Really Should Leave The House More:
Spotting Priyanka Chopra on the cover of a Finnish women's magazine. Right under her chin the headline reads, "Safe love and how you can get it". I won't act like this is the height of fame but it cheered up my day.

Biggest "Bollywood Hits Western Consciousness" Moments:
Slumdog Millionaire's Bollywood-inspired dance sequence (clumsy but worthwhile) and ARR at the Oscars was a positive. Continuing Benny Lava-fever on the other continues to made me grumpy, this year I found a way to phrase why. 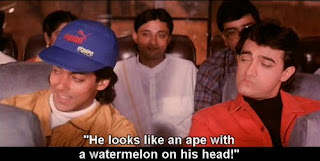 Most Fun Rewatches:
Andaz Apna Apna & later on, Khiladi. Proving nothing beats the 90's. Nothing. No, really.

Times Spent Wishing for a Time Machine:
A few. Mostly when rewatching Vinod Khanna films or at certain points of Chandi Chowk to China, because somebody really should've advised everybody against making that movie.

Times I Wrote A Plot Outline for a Film:
Only once, if you can believe it.

Biggest "Stars are Just Like Us!" Realization:
Twitter taught me we all tweet boring crap sometimes. Even if we were India's only semi-legit rockstar (Vishal of Vishal-Shekhar), Amitabh's only son (Abhishek Bachchan) or an amazingly beautiful and talented actress (Lara Dutta, Preity Zinta, Priyanka Chopra), we would.

And that concludes my filmi year 2009. Have a great New Year, you guys. See you next year.

posted by veracious at 9:58 PM

'We all tweet boring crap sometimes'. LOL! Only too true!

And if it makes you feel any better, I've only seen two films this year? (LBC, Kaminey) And then I have to live with my boyfriend coming on msn every weekend and telling me all about every 2009 film in the universe... But movie tickets are dirt cheap in India, so I guess I'd go ahead and see a gazillion films then, too. :P Curse you, zero income!

I'm with you on the Ranbir love, I don't get it. Of course, it took me FOREVER to really warm up to Shahid Kapoor, so I guess I'll just enjoy the ride. :P

I totally agree with you on Lara Dutta - I really hope she scores some really juicy roles soon.

rhilex - Aww! Yeah, it sometimes really sucks just to hear about these movies and not being able to see them. Living in India would be ideal (for that purpose)..

Anita - Gah, I'm so glad somebody does!! It's weird, I try to see it ..but I just don't. But if this is the dude who stays on top for now, I feel like I should try to like him.