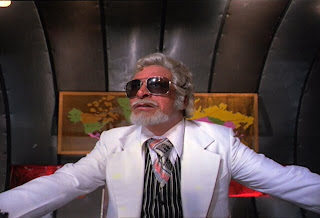 I just realized I'm not really sure what villains in Parvarish do, apart from wearing swanky suits, hanging out in submarines, smuggling diamonds and smoking in lavishly decorated villain lairs, plotting smuggling more diamonds.

But who cares, right? As long as we get dishoom-dishoom. I could lapse into some thinky thoughts on how it's interesting that the villain is the rich fat cat smuggling diamonds, drinking expensive foreign booze and entertaining dancing girls, and nowadays it's the hero who has money to throw around, despite no diamond smuggling.

Gosh, it's so glamorous, diamond smuggling. 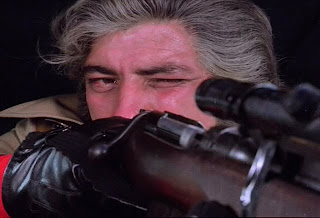 Of course, the baddies are bad. They have no regard for human life, and all of that bad bad bad stuff but still. Diamond smuggling. That's just kind of cool. 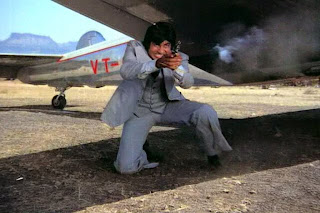 Plus if there were no baddies, when would Amitabh get to make his "shooting people" face? 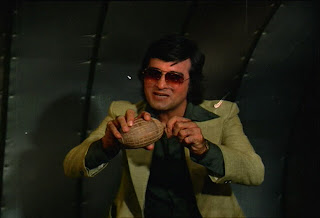 If there were no villains, we wouldn't have the awesome Vinod Khanna performance where he's half-hero, half-villain. Redemption is naturally always just around the corner, but why bother when it's so fun to be evil? You get to smuggle diamonds, smoke in lavish lairs and threaten people with hand-grenades.

And if you are lucky enough to be a Vinod Khanna fan watching this movie, you get the best of both worlds - he's perfect fit for both sides of the coin, as the calculating criminal and as the romantic hero/good guy. 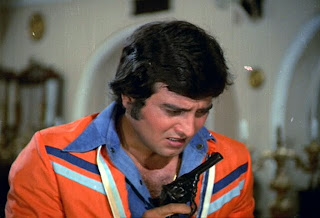 And when he has his change of heart? The whole scene is a delicious manpain buffet. Just so good. 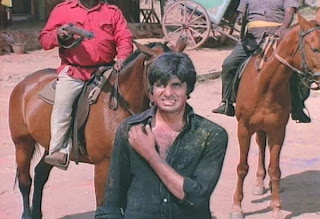 I really love the action scenes, whether it's firearms or plain old physical mano-a-mano. Sadly these scenes typically fail to screencap well and me being a total screencap snob always fail to save the blurrier ones. But instead have this aftermath one from Sholay.

And speaking of which.. 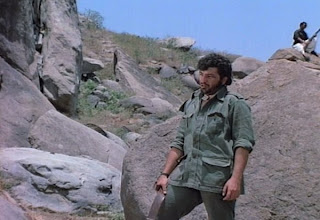 Just like you can't discuss heroines in the 70's (in my opinion) without mentioning Seeta Aur Geeta, I don't think you can discuss villains without mentioning Gabbar Singh. But I'm trying to keep this post short so you can read more of what I think of Gabbar from this post. 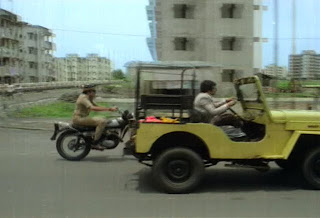 And badassery? Well, it kind of goes without saying. The villains are evil and the heroes are active, so you get epic chase sequences, shoot-outs, high-kicks and the works. The viewers all learn the Hindi words for "bullet" and "blood" (goli and khoon if I remember correctly).

You might want to skip tomorrow's 70's Week post if you are not an obsessed Vinod Khanna fangirl/fanboy. Just a fair warning!
posted by veracious at 4:16 PM

Yes yes yes!!! Not until I was writing up my "my favorite 70s films" post late last night did I realize that there are in fact two full villains in here - just like there are two full heroes and two full heroines. Which of course means TWO LAIRS. TWO. Suck on that, Amar Akbar Anthony! :)

EXCELLENT call on Amitabh's "shooting people" face! I'm so glad to have a name for it. Excellent dissection of Vinod's role/performance too - I hadn't thought of that either!

This is all glorious evidence that I will NEVER get to the bottom of this film - fan's delight!

That grenade thing is one of my favorite moments in the film. It looks so much like a sugar bowl from a tiki lounge. I also really love the moment right after the next picture, where Vinod is soooo conflicted about his identity that he has to clutch the furniture to express his tumult. (Shashi does this move sometimes too, even to a wall. Dang, boys.)

Dharam-Veer has like a million villains so Manmohan Desai has a tendency to get one up on himself but two villains is double the fun, naturally. :D

I'm not surprised I can actually talk about this movie for 5 full posts' worth.

And yeah, I love the conflicted/devastated furniture-clutching. Vinod Khanna characters in pain -> happy Veracious. Is that weird of me? :D

I will watch it this weekend, and am looking forward to Vinod having a foot in both camps and doing the manpain thing. Am completely with you over Vinod K in pain (at least masala pain) - it totally makes me happy too... Should we look for therapy?

"I just realized I'm not really sure what villains in Parvarish do, apart from wearing swanky suits, hanging out in submarines, smuggling diamonds and smoking in lavishly decorated villain lairs, plotting smuggling more diamonds..."

Oh my, in Villainous lifestyles what else IS there to do?

Given the choice, I'd be a villain because I've always wanted my own personal submarine.